Bishop Marshall on the "most dangerous woman in America" 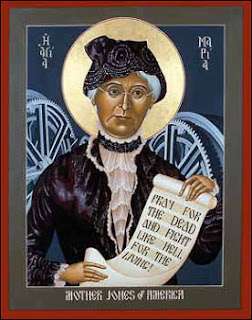 A monument to Mother Jones stands at the corner of Route 209 and First Street in Coaldale, Schuylkill County. Politicians dubbed her the “most dangerous woman in America” – when she was 83. In the coal regions she is remembered somewhat differently.

The Coaldale monument (one of those blue highway markers) recalls Mother Jones leading a march of 2,000 wives and mothers from McAdoo to Coaldale in support of striking miners. This unsuccessful strike of 1900 led to the great strike in 1902.

Mother Jones worked for better conditions for miners and their families for 50 years. President Theodore Roosevelt had reasons not to care for her: she led a march of children from Philadelphia to his Oyster Bay home protesting child labor. Their placards – “We want to go to school, not to the mines” – suitably embarrassed the president, but he would not meet with the marchers.

They went back to their miserable existence leading mules, operating doors, and sorting coal in the breakers. Mother Jones kept on working for children. Her subsequent children’s marches prompted the U. S. Senate to investigate child labor.

Up and down the Appalachians, Mary Harris Jones spoke for, was jailed for, and worked for miners seeking improvements in their working conditions that you and I would consider minimal at best.

Sometimes, but not often, it was a matter of educating the owners. When she met with John D. Rockefeller after the 1914 Ludlow Massacre she convinced him actually to visit the mines he owned in Colorado. When he did, he was appalled and made changes immediately.

It took until 2002 for Mother Jones to get her blue marker in Coaldale, just a hundred years after she got the title, “most dangerous woman in America.” Consider taking a drive on 209 to the Mother Jones marker this fall. Besides taking in the beauties of that road, there might be something to be gained from pondering the miners’ struggle. Stop in the coal museum on the way, and Jim Thorpe for contrast.

In the last thirty years the gap between the rich and the poor in the United States has widened enormously. While the rich are temporarily a little less wealthy, poverty continues as strong as ever, consuming the lives a children as surely as did the dark past.

I was one of the religious leaders who met with our then-new governor in Philadelphia upon his election. He promised that education was his priority and that our schools were going to change. Those promises have not been kept for the most part, and Pennsylvania still hovers very near the bottom in per-student state spending. Good schools are still for the rich in Pennsylvania, and will remain so as long as property taxes fund education.

In their injustice to children, these forgotten promises bring us right back to Mother Jones. Potential new employers look for more than tax breaks: they look for a region with an educated work force. The future of tomorrow’s workers in this Commonwealth depends on our leaders keeping the promises they make to children. Would Mother Jones be marching for families today? I think so.

Those whose families have escaped low-wage jobs and whose children are headed for college often quickly develop amnesia. They forget that many of their ancestors worked for next to nothing, and struggled to get along in a culture that was hostile to them because they spoke another language or were of a strange ethnicity. A few individuals made their own way out, but by and large the masses needed a Moses or a Mother Jones.

The same secularism that forgot that Martin Luther King, Jr., was a preacher, forgets that Mother Jones was driven from Chicago to the mines in part by the encouragement of her brother, a priest. Although it is slightly anachronistic to put it this way, she stands at the head of the great Catholic Workers’ movement in this country. Nonethless Dorothy Day considered herself Mother Jones’ disciple.

For Mother Jones, putting faith into action meant enduring slander, jail, and 50 years of hard work. This month of September, during which we celebrate Labor Day, is a time to ask what our generation will do to increase equality, compassion, and education in present day America.

--Written by The Rt. Rev. Paul V. Marshall, Bishop of the Diocese of Bethlehem.