In 10 words or less,
who would you say you are? 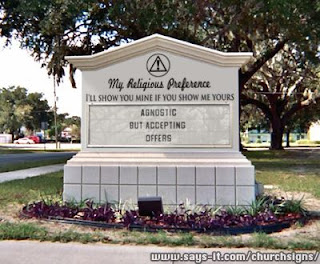 If you had ten words or less, who would you say you are? A few weeks ago, The Washington Post explored how people named their own faith when left to their own devices. He looked at how people describe themselves and their own religious faith when they fill out their profiles on Facebook.

Facebook is at once a website and a network where people share information about themselves with people they know, or would like to know better, via the internet. To start using Facebook, one must complete a “profile” which is what your friends and, if you choose, people who might want to friend you might look at. So say for example, a long lost high school classmate finds me on Facebook and I allow him to see my profile. He would learn that I am “Christian-Episcopal.” Which just goes to show you how settled I am--or how little imagination I bring to the question.

Of its 250 million users worldwide, Facebook says more than 150 million people choose to write something in the religious views box.

Amid the endless trivialities of social networking sites -- the quotes from Monty Python, the Stephen Colbert for Prez groups, the goofy-but-calculatingly-attractive profile pics -- the tiny box has become a surprisingly meaningful pit stop for philosophical inquiry.

Millions have plumbed their innermost thoughts, struggling to sum up their beliefs in roughly 10 words or less. For many, it has led to age-old questions about purpose, the existence of the divine and the meaning of life itself.

Some emerge from the experience with serious answers. George Mason University student Travis Hammill, 19, spent several days distilling his beliefs into this sentence: "Love God, Love Others, Change the World."

Others try to deflect the question with humor.

A good many, however, tread the fine line between wit and truth: "Agnostic, but accepting offers." "I barely believe I exist."

Since the biggest and fastest growing group of Facebook users are between 45 and 65, you will not be surprised to learn that the question does not get any easier the older one gets. If you had ten words or less, who would you say you are?

One student found that 100 characters could not contain his whole story:

“...growing up with an agnostic father, an evangelical mother and a fundamentalist grandmother. There was no space to describe the terror he felt after learning of heaven and hell. Or how the hell part weighed especially heavily after he was caught breaking into a neighbor's home at age 7. He couldn't convey the profound faith and forgiveness he found in junior high after hearing the tear-filled sermons of a charismatic Baptist minister. Or the eventual dulling of that faith in college by alcohol. And he couldn't fully explain the slow reformation of that faith, now that he has abandoned the hollowness of his old party life. “

"How the heck do you fit all of that into a box?" asked the student, who sometimes attends a Lutheran church near Washington, DC.

If you had ten words or less, who would you say you are?

Jesus posed a similar question to his disciples. Jesus asked “who do people say that I am?” but even as the answers came in, they revealed more about what people believed and wanted for themselves than it did about who Jesus was. Some said: John the Baptist, some said Elijah, some said a great prophet. And even Peter when he confessed that Jesus was the Messiah, did not understand the fullness of what that meant and was certainly not ready for prime time because he did not know what "Messiah" really, truly meant. Not yet.

When Jesus said that it was necessary for the Messiah to be arrested, to suffer…that is be beaten and tortured…and then to die and on the third day rise from the dead, Peter could not bear to hear it.

In fact, even when the time for the cross came, Peter could not bear to hear it. He wanted to fight off the temple guards, he chickened out in the courtyard, hid through the crucifixion, and even as he ran to the empty tomb he was not quite ready to hear what Jesus said plainly. Even after Peter became a bold proclaimer of the Gospel, he then had to be taught that God’s grace was open to everyone, even Gentiles.

Peter’s story tells us that even with his initial affirmation; Christian formation takes a whole life. His story also tells us that none of us can do it alone. It takes a lifetime of formation and learning. And we all have to start somewhere.

Holy man? Mythical figure? Historical figure? Great philosopher? Messiah? Son of God? Lord and savior? My Lord and Savior? The one who gives purpose, meaning & direction to my living? (Good job, Father, Exactly ten words!) The one that I follow with all my heart…the best I can…and who grounds and shapes my life? (That’s 15 words. Try again.)

If you had ten words or less, what would you say?

The question is not just an exercise. Jesus says that whoever is ashamed of me in this “sinful and adulterous generation” …meaning that Jesus thought his generation to be both faith-less and wandering, too…I will be ashamed of them. If we had to write our faith down in ten words or less, would we be ashamed, or—maybe worse—speechless?

Now if the church were the only place in all of human commerce that offered values, ethics, and a narrative for living, then there we would be facing the question differently. Then we’d be the go-to place for all this and people would be knocking down doors and we could set the rules. Even though sometimes church acts as if we have a corner on the market, we don't . We live in a free-market of ideas that has over several generations has been gradually relegating the religious to the level of “life-style” or “hobby” only slightly less important than how we dress, what music we hear, what some celebrity is up to and which teams we root for.

In that free-marketplace of ideas, we can pick and choose our values. We can buy posters and send e-mails that tell us that everything we need to know to live life we’ve already learned in kindergarten. Or the things we may or may not learn on a sports field are our main guide to how to live life. The movies tell us that our dreams are the most important thing.

The point is that everyone learns values all the time from all kinds of places. And when a few of us come to a place like this to learn them or sort out which to keep and which to toss, what we do is compare and contrast the mixed messages of the culture against what Jesus teaches and does. It is often a trial and error process, best done in groups.

Every time we baptize a baby we have promised—at least for the last 30 plus years since we’ve used the current baptismal rite— “to do everything in our power to uphold this person her or his life in Christ.” In our parish, we all put that promise in writing when we all sign the really big baptismal certificate.

When we sign that certificate, are we really saying—deep in our heart of hearts—"Good luck! I hope those parents or whoever teaches Sunday School that year does a good job!" How many of us have signed off on a promise and then left it to others to work out?

Let me tell you, I am embarrassed to think of how often, in the course of my ministry, I have filled out the teaching rosters, handed off a curriculum and then checked that task off my "to-do" list. This is not something a check-list or even the best off-the-shelf program can solve by itself. The solution lies in how the whole faith community does it's job.

Every generation has a responsibility to teach the next generation what gives value, hope, meaning and direction. And all of us participate in that formation in how we are with each other, how we support the learning, how we act on our faith how well we participate in the life of this parish. All of these things make a difference. Don't ask me how I know this but kids are watching what we do and how we do it. The Epistle of James wasn't kidding when he said that what we say can get us into trouble!

The job of formation does not end when the child gets old enough to have an opinion either. Because even the most rebellious teenager is pushing us to show that we mean what we say we believe and that what we believe will make a difference. And every adult goes through a period, sooner or later, when they have to reconcile what they have lived and experienced with what they have said they believed. The question “who do you say that I am?” does not stop at puberty, or when we get a job or start a family, or when we enter middle age or even when we die. It takes a lifetime to answer. A lifetime of faith.

We--all of us together-- have the responsibility to tell the Christian story to and with our children, and help them know how that relationship with God in Jesus Christ makes a real, functional difference in their lives. How we do that? Well, that’s up to us. The program can be as creative and as different as we want to be—Sundays, weekday afternoons, small groups, big groups, home learning—the program is just a tool. But here is the most important part:

Together, we must find the ways to teach and form our children. We must live out our promise that we would help our children, and each other, answer the question “who do you say that Jesus is?”

And not just in ten words, but with their whole lives.