Health care is mercy in action 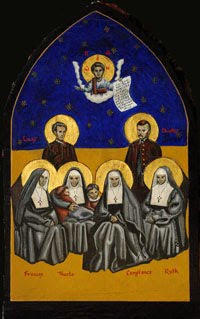 This is my latest column for the religion section of the Morning Call of Allentown, PA, and it appeared last Saturday, September 12. I am indebted to the blog conversation started by Steve Hayes at Khanya (which I found in creating this post for The Lead at the Episcopal Cafe) that got me thinking in this direction. From there, it became my homily for the feast of Constance and her Companions which then became this column.

What do The Good Samaritan, Ebenezer Scrooge and characters in Jesus' story of the rich man and Lazarus have in common? Each of these stories involves compassion or the withholding of compassion.

We all know about the Good Samaritan, the story of the man who was attacked on the road from Jerusalem to Jericho. A priest and a Levite passed, but offered him no help -- no health care. It was a Samaritan who cared for him.

Jesus told that story because a lawyer asked, ''Who is my neighbor?'' but Jesus turned the question around: ''to whom should we be a neighbor to?''

We all know who Ebenezer Scrooge is, the nasty old skinflint who turns aside every opportunity for charity. Thanks to the three ghosts sent to him by his late but condemned friend, Jacob Marley, Scrooge changes his ways and not only learns to celebrate Christmas, but, most important, learns how to be a charitable person. The chief sign of his changed heart? The care, the mercy, he makes possible for Tiny Tim Cratchett.

Jesus told another version of the same story 1,800 years before Dickens. He tells of two people, one poor and one rich. The poor man sits outside the rich man's house begging, and suffers from poor health. One day they both die. The poor man sits at Abraham's bosom in heaven, finally seen and comforted, while the rich man is in the place of the dead. The rich man is thirsty and asks Abraham to send the beggar down to give him some water. No dice, says Abraham! Well, the rich man says, at least send the beggar to go and warn my brothers so they don't end up in the same pickle as me. Again, Abraham refuses. ''You had your chance for mercy, and your brothers still have theirs!''

In all three stories, mercy is given or withheld. The Samaritan, unlike the rich man in Jesus' other story, did not walk past the injured man, but went out of his way to care for him. All three of the stories remind us that the way we care for ourselves is to care for others, especially when that care is at once spontaneous and, on some level that really matters, costly.

There has been a lot of fear and loathing on the health-care trail. The debate this summer has been disappointing in so many ways. It has been rancorous, loud and demeaning. People at meetings shout down their representatives. Politicians, lobbyists and interest groups have no trouble telling lies to win a political point. So while we may talk about policy, costs, ethics and theory, what is driving the debate is fear. Too much fear, left unchecked is paralyzing and can bring out the worst in all.

Christians and other people of faith have been quick to line up behind one policy approach or another, but few have taken the time to think about the most basic question: What is health care for?

What does it mean that we spend time, money, energy and talent working to make sick people well? Why do we set up hospitals, do medical research and train so many people to learn medicine except that we want competent people, using the best tools, to make mercy and compassion a visible reality to people who need it the most?

It was a long time coming -- generations -- but we have managed to move health care from a moral obligation borne by the community and turned it into a commodity to be packaged and marketed. We have sliced and diced our capacity for compassion as a commodity to be sold.

We have put a price on our mercy. So, like the priest or the Levite in Jesus' story, we weigh whether it is convenient or too costly to care for those who are ill, injured or dying. The debate this summer has revealed that we are fearful that no one will care for us, or that someone will take away what we are due. We have forgotten the ancient truth that the care we get is directly proportional to the care we give.

This past week, in Episcopal and other churches, we remembered a nun named Constance and her companions who died in 1878 in Memphis, Tenn., when Yellow Fever ripped through that city. Everyone who could leave did, but those who were too ill or too poor or connected to a person who was sick stayed.

Sister Constance, an Episcopal nun, along with her Episcopal and Catholic counterparts, some clergy, doctors and some lay minister from other traditions stayed in the city at the height of the outbreak. Many of them died and they became known as ''the martyrs of Memphis.''

Health care is front-page news. There are many vested interests, and lots of people whose livelihood--from the janitor pushing a broom, to every doctor, nurse and health care professional to the CEO making a decision to the investor wanting a return--depend on what gets decided. People of faith are tempted to jump in an take sides. But before we dive in and take sides, people of faith need to remember what health care means. Health care is mercy in action and we are all called to be merciful and compassionate to anyone in need.