If you can't run the race, change the rules. 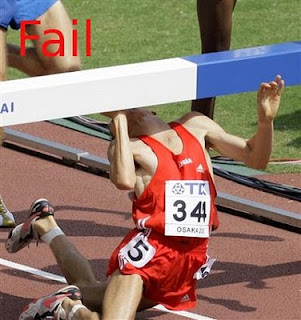 Just when you thought it was safe, the Anglican Wars pop up again. The usual suspects have come with a new scheme designed to force an outcome of their own liking.

Mouneer Anis, Primate of Egypt has resigned from the Joint Standing Committee of the Primates Meeting and the Anglican Consultative Council, and urged others to do the same.

His resignation coincides with the release of a typically verbose missive from the Anglican Communion Institute in which the four guys with a Web site urge the following:

But since there is no body currently recognized, either by the Instruments or the Churches of the Communion, as authorized to exercise the responsibilities of the Standing Committee of the Anglican Communion in coordinating the implementation of the Covenant, we think it is necessary and appropriate for the covenanting Churches themselves to fulfill this task initially by convening a provisional committee drawn from the Primates and ACC representatives of Churches that adopt the Covenant to coordinate the implementation of the Covenant within the Churches and dioceses wishing to participate.

...Many Episcopalians have been critical of the Covenant, but they've never advocated anything as radical as what Anis and the ACI have called for tonight.

On reading this: I wrote this comment on The Lead:

From the very beginning, the ACI and their like-minded friends have operated this way. If you cannot get what you want from the structure you are in, create a new one and drive around it.
Having failed to get their way through the General Convention, they declare that the Episcopal Church is somehow beholden to the entire Anglican Communion. They say this, rewriting history as they go, even though the first bishops of the first Lambeth Conferences specifically warned against such a notion.

Then when the Anglican Consultative Council was insufficiently punitive, they get the Primates Council to assume authority it was never granted.

They take a "report" (called Windsor) and turn it into a blue print for a re-design of the Anglican Communion with the emphasis on punishment and enforcement.

When one of their parishes or dioceses don't like the decisions of their Province, they convince other Primates from other jurisdictions to intervene calling it a rescue mission, even as those same Primates would never allow such a thing on their own turf.

They encourage the creation of an alternative province and when it becomes clear that it will not (and cannot) take over the Anglican franchise in the US, they abandon it.

And now that the Anglican Covenant, which they themselves clamored for and rammed through processes that they themselves subverted, is going to have to be vetted and approved by the very councils and synods that they have driven around, they declare the process broken and propose an entirely new structure and process more to their liking.

Every time they have reached a constitutional or legislative impasse, their solution is to create a new structure tailor-made to assure the outcome they want. Now even the distorted, biased, and bloated processes of their own design cannot get the job done. Once more they want to change the rules to get a result they can rely on.

The Covenant is a solution in search of a problem. It is a structural and political solution to a theological problem. As such, the more we try to make it work the more artificial it becomes.

The Covenant is a failure because it is a fake solution to a real problem. It claims to be about unity and common life, when it is all about (despite the protestations of Archbishop Williams on YouTube) punishment and exclusion. The only outcome the ACI, Annis and the rest want is punishment and ultimate exclusion of the Episcopal Church, the Anglican Church of Canada and anyone else they don't like from a purified Anglican Communion.

Even if they succeed, and these latest statements prove that they won't, the Covenant will not solve the fundemental theological challenge of the ekklesia. We Christians are called to live in unity, and we have been promised that we will share in the Oneness that Christ shares with God and with us. The problem is that we Christians have a hard time living into the unity we have already been given. Communion is not a document or covenant to be enforced, it is a grace to be accepted and discipline to be lived. To live in Communion requires risk, faith and above all humility.

What the ACI and Annis propose is sheer arrogance. They cannot get what they want so they have invented yet another false scheme to get their way. If we haven't learned from the so-called Windsor "process" and the whole flawed Covenant process, we should learn it now: no amount of fake structuralism can do what Christ has already promised...to make us one.