Mortality and penitence in train stations and in churches 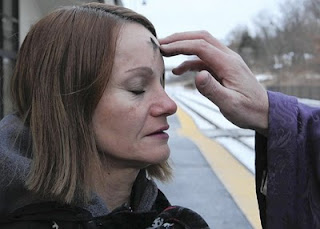 The collect for Ash Wednesday (until the First Sunday in Lent) says this:

Almighty and everlasting God, you hate nothing you have made and forgive the sins of all who are penitent: Create and make in us new and contrite hearts, that we, worthily lamenting our sins and acknowledging our wretchedness, may obtain of you, the God of all mercy, perfect remission and forgiveness; through Jesus Christ our Lord....

Later in the Ash Wednesday liturgy, the absolution includes this phrase:

Almighty God, the Father of our Lord Jesus Christ, who desires not the death of sinners, but rather that they may turn from their wickedness and live, has given power and commandment to his ministers to declare and pronounce to his people, being penitent, the absolution and remission of their sins. He pardons and absolves all those who truly repent, and with sincere hearts believe his holy Gospel.

Today I posted something on Episcopal Cafe about the experience of some clergy and laity who, on Ash Wednesday, went to train stations and business centers and offered ashes to whomever would like them.

When I was a hospital chaplain, Ash Wednesday was a very important day. I would often do chapel services but also going to patients and also to staff and visitors. I found that even with an abbreviated ritual (I used the confession from the Form VI of the Prayers of the People and some scripture), people would ask me out of the blue if they could "have ashes." I think the symbol speaks on a very elemental level.

Just this week, I found myself going around to as many shut-ins and homebound people as I could to make sure they could take part. When I got called to the hospital for a patient and the family, who knew they would not be able to get to the evening service, asked if they could "have ashes" I obliged. As I started my (admittedly short-hand) ritual, the nurse working with the patient stopped and quietly asked if she could participate.

I have found time and again that on some very elemental level, this ritual of ashes, confession and absolution works. And it pretty much cuts across denominational lines. From a comparative religion standpoint, the symbol is near universal. I think that ashes work on a level that is very basic.

Since writing this post, and seeing the same articles I found posted on other blogs and on Facebook, I have been very interested in the turn the comments have taken. They basically fall into two categories: those who are excited about it, like me, and those who think it is out of place.

I find the idea of Ash Wednesday Lite more than a little disturbing. The imposition of ashes divorced from the liturgy for the day, particularly the Liturgy for Penitence, diminishes the impact of what is intended for the beginning of the Lenten season. Surely in these two large cities there would be a variety of service times at different churches available for those wishing to attend. Ash Wednesday should, I believe, be about kneeling and praying and preparing ourselves for the Resurrection. It's more than just a smudge on the forehead.

The comment echoes the WGN radio dude that I linked to on the Cafe post where he basically says that repentance ain't real if you don't do all the steps.

I think the fear is that "cheap grace" will dilute the challenge and the edge of what Ash Wednesday (and Lent) are speaking to and perhaps let the individual Christian "off the hook." Of course, the danger in our sacramental way of doing things that people could reduce the sacraments to punch list of things that get checked off in order to be in good with God. This danger exists whether one is in church weekly or meeting a priest at a train station.

The classical Protestant response to this danger is to avoid anything that looks ritualized and make everything a matter of intellectual consent, as if this were the only way that human beings processes information that matters.

Most memorable for me, though, was the look on people's faces. They were surprised, and they were pleased. It felt incredibly intimate to me. It felt like standing on holy ground, like being caught in the middle between a God who wants so much to embrace and welcome his beloved, and people who so urgently want to be found and welcomed home.

Going back to the original Chicago Tribune piece, I would suggest looking at the whole slide series. The first half shows Father Lane at the train station, the second half of the slides shows a packed RC cathedral before their Archbishop. Now one can concentrate on the differences--one outside, one in; one in a church setting and one not--and decide one is 'right' and the other is wanting. But look at the commonalities of the two settings: people stop, people pray, people think, people present themselves and dare to take on a sign of mortality and penitence.

Now are people are doing this to check off their sense of obligation and duty? Maybe so. And if they are, are they only the ones on the train platform? My experience is that cheap grace happens in lots of places. But rather than let that possibility frighten us into helplessness, I would like us to be challenged to find new ways to communicate transformative grace in as many places as possible, especially where ordinary people live and work.

Throughout my ministry I have known people who "only" come to church on Christmas, Easter--and Ash Wednesday. Am I to begrudge or berate a person who steps up at a train station or in a hospital corridor or one of those three times a year in Church because they are not "serious" enough? Do I have a window into that soul to say for sure that I am letting this person off "easy?"

For me, I accept the presence and the request of the person who comes before me at face value. It is not about me anyway. And it is not about me making sure they get all the "t's" dotted and the "i's" crossed. I offer. Someone accepts. Perhaps in the mix God shows up and changes, heals, a heart and draw a person that much closer to Christ.

Email ThisBlogThis!Share to TwitterShare to FacebookShare to Pinterest
Labels: Faith and Culture, Reflections

Yes! It is always worth the risk!

The photo says it all. The "work" is being done.

Am I to begrudge or berate a person who steps up at a train station or in a hospital corridor or one of those three times a year in Church because they are not "serious" enough? Do I have a window into that soul to say for sure that I am letting this person off "easy?"