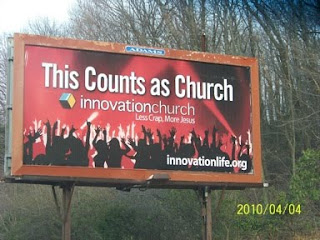 When I see the words "church," "Jesus" and "crap" all on one billboard, it gets my attention.

This billboard has been seen around the Poconos advertising something called "innovationchurch" which used to be the "Lighthouse World Center of Prayer" and before that "Assembly of God Church".

At the end of the driveway going into innovationchurch facility, there are two large cement columns. When they were an Assembly of God, there were two eagles on top of the posts. When they were the Lighthouse World Center of Prayer, they replaced the eagles with lighthouses. Now each pillar sports a colored cubes with an "i" on it.

What really caught my attention, though, is the fine print.

I don't know what they are not offering at this church, and they must have tossed out a lot of stuff in all that re-branding; but now we know, it was all "crap."

From their own web site, here is what they believe:

The four essential "core" beliefs that we believe are the heart of the Christian faith are: the authority of the scriptures; the deity of Christ; the atonement through the cross and the return of Christ.

Pretty standard stuff for American Protestant evangelicalism for the past century. Now here is what is not so important to them:

Types of church governments; end-times teachings; the gifts of the Spirit; styles of church leadership; denominationalism; deliverance ministry; the Lord’s supper; healing ministry; and infant baptism. Of course there are many more, but typically when Christians have become divisive over these beliefs it is because they are confusing non-essential beliefs with core beliefs.

And, look! The web site says that we should not judge one another and deal with each other in love,

Finally and most importantly, in all our beliefs we show love…

Which is why we call everything we don't like "crap."
Posted by Andrew Gerns at 10:45 PM

We love everyone and and everything except cr**
LOL

Andrew,
can I use this pic for my Australian christian paper?
(eternity.biz)

Would you please email me at the link provided on my parish website, listed at the right. Trinity, Easton, PA. (Go to the tab marked "staff.")

As one who lives in the Poconos and sees these signs every day that I'm out and about, I am intrigued with any and all definitions of "cr**". Most assuredly my idea of "cr**" and yours/theirs will differ.

There is some competition, I think, going on between this group and the Pocono Community Church, in a new building near the airport.

We visited when it was still Lighthouse and they were hosting a fund-raiser for Family Promise (an ecumenical homeless ministry that both Episcopal churches in Monroe County are participating in). I was quite intrigued when their depictions of the temple in Jerusalem. I wonder if the large model of that, and other Old Testament items are still there...

But what do I know?

These signs drive me crazy. Explaining to my kids why a church is using an obscenity always makes my day. Yeah, I get that they're making use of the shock factor, but come on.