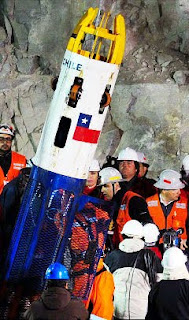 A few weeks ago, we were all chanting “Chi Chi Chi Le Le Le!” for the 33 Chilean miners who were rescued from their underground shelter 69 days after the mineshaft collapsed. It took them a few months, (but not as long as they thought) to drill a new shaft down to the miners, and then haul them up one at a time in a little capsule called, appropriately, the Phoenix.

The amazing rescue riveted the world’s attention and was a welcome piece of good news in a media landscape filled with crime, war, violence and mud-slinging politics. We heard of their faith, we heard of their resilience and how they stayed together as a team during the long weeks trapped in the dark a mile under the earth. One story going around was that all or some of the miners were led to the pre-placed shelter just before the collapse by a butter fly that found its way all the down to the bottom of the shaft. We heard one miner say “We saw both the devil and God. God won.”

Now the miners are adjusting to life back with their families and to their new-found celebrity. Two things kept popping up over and over again in the commentary and conventional wisdom surrounding this event: first, that their survival and their rescue was a “miracle”; second, we heard people ask if their new-found faith would endure once they re-entered their worlds.

The second question is more than simple academic curiosity. Can the faith we discover or hang on to when things are going bad endure or even help us after we pass through the crisis? Given that we will all experience some kind of crisis—a death, a loss of a job, an injury, some kind of relational crisis—we will all have our faith tested or discovered in the crucible of crisis.

I remember right after 9/11, how the churches and synagogues were filled with people, but before a few weeks attendance was right where it was before. As a former chaplain, I can recount dozens of “fox-hole” conversions that all but evaporated when the crisis was past.

But not always. Some people found their faith strengthened in these moments and it stayed with them. I remember a member of this parish who died a few years back. She in the Twin Towers when the planes struck and I remember how she told me about all the ways that she knew that God was with her during the whole ordeal. She told me this story as she herself was dying from cancer. She knew that God was with her during that ordeal as well.

People who study this kind of thing tell us that the ones whose faith helps them the most during the crisis are the ones who cultivate it before the crisis even hits. People who pray and worship, people who meditate and read scripture, people who learn generosity and don’t hoard their things, people who help others and look out for their neighbor before the crisis are much more likely to draw on their faith as the crisis unfolds. Sure there will be moments of fear, uncertainty, even emptiness…but they know that these are part of the process, not things which cancel out faith. Sometimes people who have been cultivating the roots of their faith without doing anything particularly conscious or public will learn that as much as their faith helped them, there is so much more to do.

So one lesson is that we develop a resilient faith early and often when things are dull, boring, and normal. What we do when things don’t matter very much have huge consequences when they do. If you want to cultivate miracles in the future, start now.

The other question to come out of the Chilean mine disaster was whether or not the rescue was a miracle.

I am of two minds on this. Was this a “water-into-wine”, “walk-on-water”, “feed-the-five-thousand-from- two fish and three loaves” kind of miracle? Well, no. No laws or rules of nature were changed, no molecules were rearranged, and time did not stop. It was not that kind of miracle.

And that’s okay with me, because it opens us to see something else at work…and if you want to call it miraculous, well, that’s okay, too. I like the butterfly story because it reminds me that I am not alone and that God watches over us in ways that we are usually not conscious of, but that’s not the real miracle to me. The real miracle is something much more humble. Something, if you’ll pardon the expression, earthy.

The remarkable thing about the Chilean mine rescue was that…it worked. On all kinds of levels. The miners apparently did not lose themselves into panic, they did not become like the boys on the island in the Lord of the Flies. The rescuers also did not lose their heads. They worked the problem, were not ashamed to ask for help (which they got from all over the world, including NASA and mining professionals from Pennsylvania). The people who helped did not care about getting the credit, but stepped aside to allow the Chileans “their” moment. The people in charge sought out and listened to all kinds of experts from engineers to people trained in psychology to chaplains to nutritionists and doctors. And when they decided, they decided---which is no small thing. Faith is as much about decision as it is about meaning.

If there was a miracle here, it was the miracle that given all the chances for all the ways that human beings could devolve into shame, blame, fear and hopelessness, they decided to stay focused “on the mission.” In a season where best most of the people running for office can come up with “I’m mad as hell” this is, perhaps, the greatest miracle of all.
To stay focused on what’s important, to not give into fear, to do things which build up courage and bring people together, to think through a problem and not throw in the towel, and to take responsibility for the choices we’ve made, is perhaps the greatest lesson we can draw out of the miracle of the thirty-three.

God made us for a purpose, and that purpose is to care for each other, for creation, and for ourselves. Living out that purpose requires us to focus on God and give God the glory and the credit and the honor for making us able to do amazing, powerful, compassionate things. To live out God’s purpose means learning how to do the mundane things of faith now so they’ll be there when things really go sour. We are tasked with using the brains, creativity, skills, and experience of everyone to directly address the desperate needs of all people that are always before us. We have the chance, everyday, to do the small things that makes our lives richer and another person’s life better.

When we choose God’s purpose, especially when the chips are down, it’s, well, a miracle!
Posted by Andrew Gerns at 12:51 PM