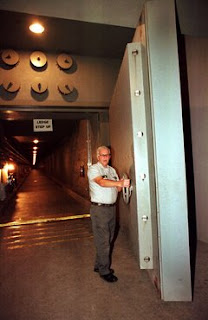 Maybe you’ve seen documentaries about it on the Discovery Channel or Nat Geo. There are even guided tours now, but it was once upon a time it was a deep dark secret. Nothing more than a rumor, idle gossip or an urban legend…or more accurately a rural legend! When I first went to minister in West Virginia nearly twenty years ago I heard stories about the “Secret” at the Greenbrier Hotel, a luxury resort in southwest West Virginia. Stories were about “the bunker.” The bunker, they said, was a huge bomb shelter dug into the mountain immediately behind the main building of the hotel. There were stories of the mysterious “television repair shop” whose staff went around in coveralls. Maybe there were a lot of broken tv’s at the Greenbrier or else….these “television repairmen” worked in the bunker.

Turns out all the stories were true. It was revealed that the government did build a huge bunker at the Greenbrier, and it was designed to hold the entire United States Congress during and after a nuclear attack. The idea was that when the alert level was high enough, the entire US Congress would be taken by train (later by plane) to the Greenbrier.

The television repair guys really did work in the bunker…except for the ones who repaired televisions. And to top it all off, the entrance to the bunker is behind the curtained wall of the grand ball room. It was hidden in plain sight.

When the bunker was officially revealed, everyone saw it as a relic of the cold war. It shows how we our national defense was built around protecting the leaders first. Maybe that makes sense strategically, but it was kept a secret not because of fear of Soviet attack, but out of fear that a frightened citizenry might resent or even rebel against the idea that the elected leaders of this country might get a level of protection that the rest of the citizenry would not.

In today’s Gospel we hear about Jesus being taunted while he is being crucified. The religious leaders taunt him because he said he was the messiah. They jeer if he were really the messiah he should save himself the crucifixion they inflicted. The soldiers and even one of those crucified with Jesus echo the same taunt. In jeering at Jesus, the Romans taunt all Jews by putting up the sign “Here is the King of the Jews.” What kind of people has a king who gets crucified?
Notice that this insult and taunt echoes what Jesus heard in the wilderness at the start of this ministry: the Evil One tempts Jesus to hurl himself off the pinnacle of the Temple so that angels would appear and take care of Jesus at his moment of greatest need.

They were so certain of Jesus’ powerlessness, that they dared him to take revenge against his tormentors as they were certain they would do if they were given divine power and a chance to use it.

Of course, God is up to something else. Everyone but one person—the second thief also being crucified—misses the fact that God is work in this crucifixion. It is easy miscomprehend the kind of reign that Jesus brought to earth.

Many people think of God as someone who made the watch and wound it up and then stepped back to let it tick away by itself. If we think of God as involved in our lives and creation at all, we have this image of God up on the top floor in the cosmic executive suite pushing heavenly paper, making divine decisions and letting others do the dirty work. So it is easy to think that if Jesus is the messiah, he is somehow privileged by virtue of his elevated status. Yeah, Jesus walked on earth but he has the key to the most executive washroom of them all. And we assume that when push comes to shove, he will act accordingly: he will, sooner or later use his power to get more power. This is at the core of one of my many problems with the theology and images of Jesus put forward in books like the Left Behind series, where in the last volume Jesus is portrayed not as the Savior on the Cross but as a vengeful, angry who obliterates his enemies. The cross, in this way of thinking, is a mere set-back, an incomplete distraction from the Real Jesus, who comes to give roundhouse kicks to his enemies.

But Jesus did not ride into Jerusalem in a motorcade. There was no divine limo with the flags of the kingdom led by an angelic flying wedge of Electra-Glide motorcycles. He rode into Jerusalem on a donkey. And even when arrested, falsely accused and mocked, he did not strike back. And when he was crowned king, it was a crown of thorns, and when he was lifted up, it was on a cross. Clearly God’s idea of kingship, of reigning in glory is very different than ours.

The reign of Christ is a reign of broken people who are healed; it consists of a citizenry of service; God’s reign is built on powerless people who find their power, their purpose and their hope in a living relationship to a loving God who made us and loved us first.

The most basic way we participate in God’s reign is through our prayer and worship. God is not far away in the Cosmic Executive Suite but close to us right now. Christ meets us at the point of our deepest need, and lives with us through all that life brings us.

It is the gathered people of God who are citizens of the reign of God. It is the people of God learning and doing the work of Jesus who represent Christ’s reign to the world God loves. It is people who gather in prayer, study, worship, service who embody the reign of God. It is when God’s people look beyond what separates us, dare to gather around Christ’s Eucharistic table, dare to baptize and teach, even in the face of our differences, that we show off that Christ’s reign is bigger, more enduring, more powerful than any that human beings can come up with by themselves.

Our tendency to reduce God’s reign to only the institutional life of the church—instead of seeing our institutional life as a servant of our status as followers of Jesus and citizens of his reign—turns the Church into nothing more than a bomb-shelter, nothing more than a place to huddle against a scary world. We are so much more than that: we are citizens of Christ’s household, we are members of His body. We are Christ’s people in God’s world making his reign known in our work, relationships, and our daily living.

Yesterday was a good day to see the reign of Christ in action: once again this church and several volunteers from a variety of other churches and groups came together to serve Thanksgiving Dinner to one hundred and twenty or so guests at the Ark Soup Kitchen. While this was going on, one crew of volunteers from this parish was renovating our chapel bathroom to make our church more welcoming to everyone who comes here. Another crew was laying paving stones in the sidewalk. Others were getting ready for the Interfaith Thanksgiving Choir Festival this afternoon.

Last week, I got a "tweet" from Charlie Barebo. Charlie, remember, was our Consecration Sunday speaker a few weeks back and is chair person of the New Hope Campaign. He was in Kajo-Keji, Sudan, last week with Archdeacon Stringfellow. So I get this message from halfway around the globe on my phone last Sunday and it says "School is open. Pictures coming." You know what that means, right? It means the Trinity Primary School in Sodogo which you and I and lots of people in the Diocese of Bethlehem helped build is now open and teaching kids, half of them girls. You see, that's how God's reign works. That's how Jesus' kingdom operates. A bunch of faithful people see a need, have a vision, act on it, and putting their own selves aside they share power with school kids they've never met across the globe.

When people whom the world would say have every right to ignore the weak and look past the hungry make turkeys and bake pies and serve the humblest of God's people, that is living in the Jesus' kingdom. This is a citizenship of service.

And when do that, the world is turned upside-down, because people who fed, visited, schooled, cared for, and the ones who step out of their comfort zone to do it, cannot see God’s reign as something far away. Citizens of service cannot reduce God to some kind of cosmic chief executive. People who known God's healing cannot settle for ecclesiastical bomb-shelter anymore. The surprise is that in Christ God is intimately involved in all our lives every day. Through his Incarnation, Cross and Resurrection, Jesus both establishes his reign and rule over all creation, and makes it possible for all of us to become by faith citizens of God’s reign.

The second thief on the cross understood this. He does not expect Jesus to save his own skin but he does expect and know that Jesus’ authority will defeat death and become, against all expectation, a gateway to life with God. When we see Christ's power and reign in the cross we will know that we are remembered as Christ comes into his kingdom.

"....but out of fear that a frightened citizenry might resent or even rebel against the idea that the elected leaders of this country might get a level of protection that the rest of the citizenry would not."

In the earthly kingdom, we think of protecting our leaders. In the heavenly kingdom, our leader Jesus bore the penalty of our sins so that He could give His 'citizenry' (us) protection.

In the words of an old hymn, "Hallelujah, what a Savior!"