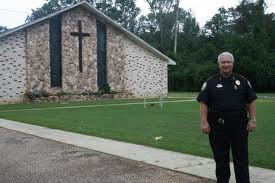 Watch out if you go to Bay Minette, Alabama, and are caught doing some sort of minor crime because you will be given a choice. Church or jail.

According to WKRG-TV, starting this week authorities will give non-violent offenders in that community a new choice: Go to jail, or go to church every Sunday for a year. It’s called Operation Restore Our Community and fifty-six churches have signed on.

If offenders select church, they will be allowed to pick the place of worship but must check in weekly with the pastor and the police department.

If the one-year church attendance program is completed successfully, the offender's case will be dismissed.

Bay Minette Police Chief Mike Rowland says the program could change the lives of people heading down the wrong path.

We’ll see if this idea works. Church or jail? Which would you choose? Personally, I’d have to ask which church. Jail might be preferable.

Jesus tells a story about two sons who are asked by their father to go out into vineyards to work. The first son is the one who "I will not go," but later changes his mind and goes. The second son is the one who says he will go but does not go. He then turns to his critics and asks which one of the two does the will of the father? They of course say that the first son, in the end, does the will of the father. In their answer, the super-religious show that what is really important is what a faithful person does that’s important, not just what they say.

A bishop and teacher of the early church named Chrysostom wrote that the Christian is like the son who at any hour turns and chooses to do the will of the father; to go out into the vineyard and work. The Christian is the son who is the missionary.

But I think there is a deeper message that Jesus is offering. While it is certainly true that God wants us to go out into the world—the vineyard—and do God’s work…that is, to do mission… there is something else going on here.

The Good News is that it is never too late to follow Jesus and to do God’s work in the vineyard. God will embrace the son who turns and chooses in the end, no matter what they have been doing, to become a member of the community of faith.

Today’s Gospel story only appears in Matthew, and it reminds me of another one of Jesus’ stories, the one about the prodigal son that is only in the Gospel of Luke. That son squandered everything and came home expecting to grovel and scrape as a slave but instead is welcomed with open arms. Today, the son in Matthew’s Gospel who says “no” but then turns around choosing to do “yes.” He is a prodigal, too. He comes to his senses. He does the work he was asked to do. In both Gospels, a son turns around. In both cases, repentance—turning around—shows that the life of faith is as much an act of the will as is act of the heart. Living faithfully is depends on the deliberate choice to live in concert with God—especially when we don’t “feel like it.” Faith it turns out is both an act of the heart and an act of the will. And that means that we choose not only to believe but we choose how to act on those beliefs. Before long, we learn that our faith is not faith until we choose to act faithfully.

That’s something the Alabama police chief and judge may, in their good intention, may have missed. Or maybe it’s what they hope for. But try as we might, you can’t force people to believe—and the vineyard is not just for sitting and listening to the farmer talk about grapes. They’ve solved the “will” problem—church or jail—but the “heart” and the “action” part--what people do with their belief—they can’t control that. And that makes all the difference.

I wonder about the 56 churches that signed on this program. I wonder if they are ready for the local check-kiter, petty thief, or the chronic “drunk and disorderly” to actually be sitting in their pews. Because, I don’t know about you but I notice that sometimes we get nervous when someone who once said “no” and who now says “yes” to God and is trying to walk a new way comes and sits among us. We are not sure if we can believe it and we have a hard time forgetting that original “no.” And how we act towards people who are new to church…let alone faith…makes all the difference in that person’s success in living out a new-found, but hard-won, faith.

Have you ever noticed that there are two doors in many churches—ours included—a front door and a back door? Both are painted red…for welcome…which is good. And many of us come in the back door because it’s near the parking lot. But there are some people—actually quite a few—who come through those back entrances all the time who would never think of coming in the front doors…the nice carved ones that lead to this sanctuary. They are people who come to the four twelve-step groups that now meet here every week or who eat in the soup kitchen. They are people, especially in the AA groups, who are attempting one step at a time to turn their lives around. Who are attempting after a life of saying “no” to finally say “yes” to God. And yet… sometimes we “front door” Christians have a hard time accepting that those people who have come in another way really belong with “us.” Which makes sense, because they are not so sure either they are worthy to sit in here with us.

Jesus tells us in today’s Gospel that we are all of us sent into the same vineyard. Sooner or later, we all have to come to terms with the fact that all of us in word or deed have said “no” to God somewhere along the way, and all of us have had to come to our senses and choose to follow him anyway. When you get right down to it, our stories are not so different after all.

Don’t be shocked by this: everyone sins. That’s because we are human. We promise that we will strive to live faithfully and we know that we will fail. We will say “yes” and do “no” At the same time, in our baptismal covenant we say that "when" we sin we will return—we will say “no” and then do “yes.” Christians more than anyone know (or should) that we are not perfect. At the same time, we Christians rejoice when the sons and daughters of God who have led life unconscious of God, or who have led lives saying "no" turn and join the other workers in God’s vineyard. It should not take a local judge to tell us this, but we, the church, exist for those who do not yet belong. We exist so that the vineyard is there ready for the latecomer and for the newcomer to join in God’s gracious harvest.
Posted by Andrew Gerns at 7:06 AM

I think the clergy there have lost their minds. This is such a blatant violation of the 1st amendment of the U.S. Constitution--and why would clergy be volunteering to serve as unpaid parole officers for the state?! Serving as "jailers for Jesus" strikes me as a pretty poor way for clergy to bring the Gospel to people who desperately need it.

Somebody needs to file a lawsuit. Fast. And I think some clergy need to examine what they have really signed themselves up for....