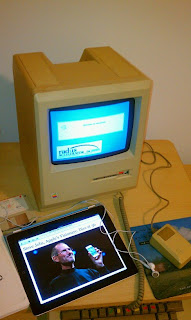 The first computer I ever owned was a Macintosh 128k. I saw the famous commercial at the Super Bowl and ran right out and bought one. Later on, I got another...the one pictured here. A 512k which I souped up. I got a couple of hard drives as big as small phone books and was doing serious writing and graphics work. These two machines got my wife through grad school at Columbia and me through CPE at Hartford Hospital and post grad work at Andover-Newton. Consider that I finished seminary in 1979 with my wife using an IBM correcting Selectric II and me using the mighty Royal from World War II...this was quite a change.

Both my kids used these machines. They played games, drew pictures, did their homework on them. We got a program that had a very rudimentary voice synthesizer...it could read simple stories. This, along with the first video game systems of the day, I think got them thinking about the world differently that I did at their age.

I got out of the Mac world somewhere around System 9, which was a dog, but kept those first two machines.

My first new Apple product...after more than ten years...was an iPod that I got for Father's Day one year. And a few months ago I was given an iPad2.

I have to say that the iPad has probably changed my computing habits almost as much that first Macintosh did 27 years ago.

I suppose that most us of learned of Steve Jobs' death the same way: by text, twitter, or FB post. The first thing I thought about was that old Macintosh and the new iPad. I am thankful for the imagination that took us into a new way of connecting our world. Our world is profoundly different because of all that imagination unleashed.

The real sign of Jobs' impact is apparent in what that picture does not show: I took the picture with an Android phone, wrote this post on a PC. The point of all this imagination is not the product but the vision of creativity and connectivity made accessible to the ordinary person. This changed the world as much as the printing press did in its day.