Confessions of a guilty Christian bystander 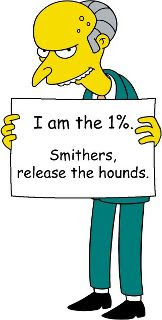 Ron Dreher is an American Tory...that is to say he is a conservative in a very different mold that the Tea Party or the "pro-business at all costs" approach of the self-styled Objectivists. He wrote an essay in the American Conservative in which he reflects on the Occupy Wall Street movement and the implications of the unbridled, unregulated wealth of the financial system we now inhabit.

Much of the response to OWS has been either abject horror or undying adoration. Two summers ago before the Tea Party was bought, packaged and re-purposed a corporate-owned re-branding of the GOP at a frat party, I was on the "abject horror" side of their movement. That's why this essay came to me a kind of tonic. In it Dreher offers a third way of approaching the discussion of Occupy Wall Street...and, as I said, perhaps as an overly late corrective to the original Tea Party movement.

After observing an "Occupy Easton" demonstration up close yesterday, I found myself struck by both the anger and the naivete of the participants.

Most of all I was taken by the cozy libertarianism of the group that cut across political lines. There were young second amendment fundamentalists holding signs right along side modern day punks, grown up hippies and guys who went to college on the original GI Bill. The place they picked was a park in downtown Easton that was close to a publicly financed playground for their children. Everyone was angry at Wall Street and Government, those amorphous entities, and well they should be. But very few were thinking about how their anger was shaped by the very values that drove the financial crisis we are now in.

Their anger at Wall Street was that they were not receiving their fair share of the pie. Their anger at Government was an oscillation between not checking the greed of the Street and fear that the Government will take more of "what's mine."

Now Dreher and I are not on the same page ideologically. Where he says that is not possible to be a Christian and a communist or a fascist, I would add that one cannot be a Christian and an (so-called) objectivist. And where he sees the "the most natural political orientation for a serious small-o orthodox Christian is on the Right", I would say that the most natural orientation for a serious small-o orthodox Christian is on the Left. I also think that Dreher pulls his punch when he says: "I do believe it’s vulgar and borderline blasphemous for a political party to claim Christ." There is nothing borderline about the vulgarity. When a political party claims Christ as their own, it is blasphemy. But I quibble over details.

Here are snippets. It is worth reading the whole essay. Especially the story of the epiphany that his financial industry friend experienced.

And yet we cannot be serious about our faith and act as if it had no political implications. No one can take the Bible seriously and believe that the truths it teaches have nothing at all to do with how we order our common life. There is the matter of human dignity, and justice. The Bible has much to say about the poor — and what it has to say about the rich is not very complimentary, to put it mildly. I believe the free market, for all its flaws, is the economic system that is not only the fairest, but is also the economic system that best conforms to our human dignity. But the market must be seen not as an end, but as a means to an end....

Email ThisBlogThis!Share to TwitterShare to FacebookShare to Pinterest
Labels: Politics and Faith, Reflections