Jesus showing up in inconvenient guises 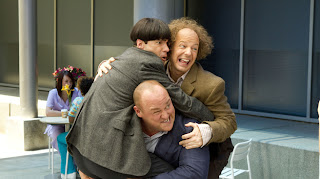 So the Farrelly Brothers have made a movie remaking The Three Stooges for our generation. Depending on your point of view, this is either the end or the highpoint of Western civilization. Now I haven’t seen it, but from what I have heard, the directors wanted to reproduce the exact feel of the 1930’s vintage shorts than became a staple of Saturday morning television for boys of a certain age like me. The film also provides a back story about how three bumbling knuckleheads came to be so bumbling.

In a weird way, the advent of this film reminds of one of my own Easter stories.

Once upon a time, when I was a brand-new transitional deacon, I was assigned to a parish in the middle of a small city not unlike Trinity, Easton.

St. Paul's in Willimantic, Connecticut had a soup kitchen, too, only theirs met six days a week. I lived a few blocks away and would walk to church. On Sunday mornings, I liked to go early and putter around in silence making things ready for worship. There was a wrinkle in my plan, though, and his name was Billy.

Billy was a man in his late 40’s, who spent most of his life in an institution run by the state for the mentally handicapped. The state was gradually moving these folks into the community. Highly capable folks from the Training School, were moved into apartments. Those in need of more supervision went into group homes. Billy was one of the ones moved into an apartment near the church. Billy loved church. He also loved to talk…which he did at 100 mph in a rather high pitched voice. I tried to teach him things: like how to help set  up the church, how to light the candles without setting him or the church on fire; how to set out the bulletins.

Nothing worked. Billy followed me around talking incessantly. He broke things. He spilled and dropped things. He interrupted and startled people. He also scared people who did not know what to make of him. And the truth is Billy really got on my nerves.

My romantic image of a time of contemplative silence went out the window when I came down the street and saw him there at the door, waiting. So not only was I annoyed and impatient, I was angry. And I am sure it showed, so I was embarrassed, too.

My supervising priest at that time was the most saintly man I ever knew. His name was Canon Francis Belden. Or, as Billy called him, “Kenny.”

Canon Belden would always treat Billy with great patience and never seemed to get upset by his antics.

One day, after a particularly exasperating encounter, I came to supervision feeling at a complete loss. I had run out of tricks, distractions and gimmicks to deal with Billy. Tired, confused, and—as I said—embarrassed, I asked Canon Belden how he did it. How was he able to stay so even-keeled with Billy even after Billy has crashed into him or dropped something or interrupted a conversation.

Before I could fall into a deep hole of guilt and pointless shame, Belden added this truth that I have never forgotten. The secret to a successful Christian life, he said, is seeing the face of Jesus in others and also knowing that you are Jesus’ face to someone else.

Billy was Jesus. Jesus came disguised as an annoying, pesky, klutzy guy who was trying to apply the life rules learned in an institution to  a world where he was now by himself for the first time and with very few rules. Billy was a lot of things and he certainly tried my patience, but he was no stooge. He was a person. He was a person with dignity given to him by God. He was alone and struggling. And he was Jesus in precisely the way and at precisely the moment I needed to see Jesus.

And it changed me.

God is not without a sense of humor. Because, amazing as it may seem, I was Jesus to Billy. I spent time teaching him to light candles and giving him jobs in church. And if he screwed up, we tried again. And again. And again. Yeah, I lost patience when he dropped the bulletins all over the floor or would run up to give me something in the middle of a sermon. How did I know that my bumbling, haphazard attempts at ministry really meant something? It was the bone-crushing hugs he gave me at the Peace and the really syrupy Father's Day cards every June.... Well, what else do you give a priest on Father's Day?...that told me that maybe, just maybe 'Kenny' was right. We were Jesus to each other and didn't even know it.

This lesson came to mind a few years later when I was teaching a class of high school seniors about Christianity and the Christian Life, particularly how they can prepare themselves to be faithful people in the new world they were about to enter in college, the military or the workplace.

It was during the Fifty Days of Easter and we were looking at all the stories of the Risen Jesus appearing to his disciples, one student asked, “How is it that Jesus only appeared to believers? How come Jesus did not show himself after his resurrection to all the unbelievers who killed him?”

My first response was “How do you know he didn’t?”

During these Fifty Days, we hear about various encounters between the Risen Jesus and various people. Some of them, like the disciples locked in the upper room, were people who knew Jesus in life but were so terrified after his execution that they don’t know what to do except hide.

Some, like Mary Magdalene, are so grief stricken that they don’t even recognize Jesus standing right in front of them, until he calls her name.

Others have heard the story—the rumors—of Jesus’ resurrection but have no idea what to make of it until someone opens the scriptures for them and explains what it all means—like Cleopas and his companion on the road to Emmaus.

And like Cleopas and his friend, some do not see the risen Jesus until they meet him in the Sacrament of Christ’s body and blood.

Paul met the Risen Jesus while he was actively persecuting Christians. It turns out that what he was trying to stamp out was in fact chasing him down.

Most other people meet the Risen Christ in the story, the actions and the lives of people who follow Jesus and have been changed by him. As Jesus says to Thomas, “blessed are those who have not seen and yet believe.” That’s us, in a way.

We have believed even though we haven’t seen the risen Jesus in the upper room, eating a piece of fish, as we heard in the Gospel today.

Just because we didn’t get to be in the Upper Room does not mean we are without a clue. The Risen Jesus is right there in front of us all the time. If only we have the eyes to see.

Jesus might come disguised as that guy looking for a handout, or as the student who can’t do anything right. Jesus might show up as your spouse or your co-worker or the classmate that everyone ignores. We host a whole room full of Risen Jesus’ every Saturday: they both serve and eat the food in the Ark Soup Kitchen. Know it or not, they are Jesus to each other.

It would be nice if Jesus were always nice. It would be great if Jesus only showed up on our time-table and in our image. We'd really like it if Jesus only appeared to people just like us. But Jesus, God-with-us, was born in a stable, and grew up to touch and heal unclean people. It was Jesus, God-with-us, who cared for the sick, the helpless and the needy, who forgave sinners and challenged the righteous. The One who blessed friend and foe alike as he died on the cross, is now alive and shows up where we least expect him and where we most need to see him.

Sometimes when I realize that I’ve just encountered the risen Jesus, it feels like a slap in the face. But it is not a pratfall, and it is certainly not pointless violence or tomfoolery. It’s a startling wake up call to the blessing of meeting the Risen Jesus face to face. It is the stunning, liberating (and often inconvenient) demonstration of how it is that God restores the full dignity of human nature to even the most unlikely of God’s children.

Email ThisBlogThis!Share to TwitterShare to FacebookShare to Pinterest
Labels: Being a friend and apprentice of Jesus Christ, Easter, Faith and Culture, Sermons

Lovely. Thank you very much for posting this.

In my short time at Trinity I have come to appreciate you as as someone who both challenges and opens my eyes to see Jesus in every aspect of my my life. Thank you!