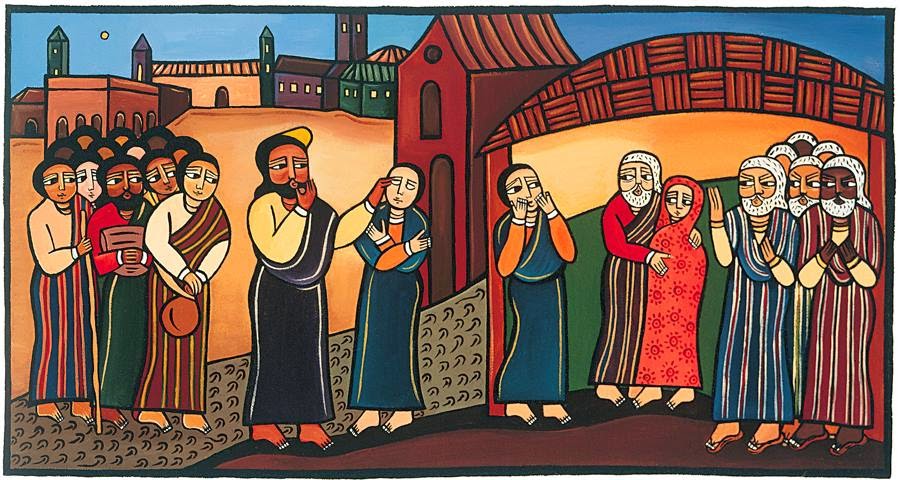 A sermon for the Fourth Sunday in Lent, Year A (Revised.)
John 9:1-41
I had no idea how foggy my vision had become. It kind of crept up on me.
You see, my eyes have been fogging over and little by little until on bright sunny days, my vision became as if I was looking through a shower curtain.
But some amazing technology is fixing that. A few weeks ago, I had the first of two surgeries to remove these yellowing cataracts and not only that, these new lenses will correct some other long-standing problems. It's really quite amazing!
Now an eye that has been deeply near sighted most of my life is now wonderfully clear. After Easter, I will get the other eye done and a month or two after that, after doing exercises to teach my eyes—especially my previously “bad” eye—how to see again, I will get new glasses just for reading.
I am seeing a lot of new things..and a lot of old things in new ways. And if there is one thing I have learned from all this it is this: There is seeing and then there is seeing.
One way I like to read the Bible is to play a version of Jeopardy. You know, I want to figure out the question that leads to the answer that Scripture is giving us.
So if I were to say “Gospel of John for five hundred, Alex” the question that leads to today’s really long answer would be: "What is seeing without really seeing?"
If Jesus is the Son of God, God’s perfect expression in human form, (aka The Word or Logos), then why couldn't the smartest, most faithful people in all the land figure that out?
The Gospel of John says that's because there is seeing and then there is seeing.
One Sabbath, Jesus and his friends come across a blind man begging by the side of the street. “Who sinned? This man or his parents,” his friends ask, “that he was born blind?”
“Nobody sinned,” Jesus said. “But God can use anything to do God’s work. Watch this!”
So he takes a little dirt, spits in it to make mud, and then spreads the mud on the blind mans eyes and then sends him to the healing place to wash. He goes (or is taken) and he is healed.
The religious leaders were amazed that the blind man can see, but they are offended that he was led to the healing place after hours and that someone made mud to do the healing.  So they interrogated the man.
“Who healed you?” they asked.
“I dunno. Someone named Jesus.”
“Uhm.... Did you say Jesus?”
“Jesus.”
“Okay. You’re not really that blind man. You’re just pretending.”
“Yes, I am. Ask my parents.”
“Whatever. So, how did you get healed again?”
“What are you? Deaf?  I told you! Jesus healed me.”
“La la la la la... I can’t hear you!" (An ancient form of theological debate.) Then, taking a deep breath, they said "You can go away now. Shoo.”
Later on, when Jesus comes back to the man, it's a good thing that he did not ask the man how he received his sight. Because after all the hassle the man might have hauled off and popped the Son of Man right in the kisser.  Instead, Jesus asks the man if he believes in the Son of Man.  The man says “show me, and I will believe.” Of course, Jesus is standing right there. And the man does believe.

The problem with spiritual blindness is that we don’t see what is right before our eyes.
Blindness can come from seeing too much. It can come from thinking we know how the world works and how it ought to work. Blindness can come from thinking we have everything under control. It can come from thinking that we can get God on our side if we are good enough, smart enough, clever enough. Blindness can come from thinking that we have—or ought to have-- in ourselves everything we need, and that we don’t need anyone else— and that we are above the need for spiritual help.  Often, when we think we see the most, that is when we are the most blind.
When I came to this diocese, I met a woman priest (who has since moved on to ministry in another diocese) and she knew my dad. My father was a deacon who came his vocation late in life—that  by itself is a long story, but for another time—he was a deacon assigned to the chaplaincy at the hospital where she did her clinical pastoral education. She told me about how wonderfully supportive my father was of her and her journey to priesthood.
Really? I said. Well, knock me over with a feather because I can remember that when Pop first heard the news of the first women to be ordained in the Episcopal Church. Boy! Can I remember! He did not take it well. He was one very unhappy Episcopalian…and he had all his arguments lined up.
But he didn’t save his rants for the dinner table (or the coffee hour!). Once he even went to a meeting of people opposed to the ordination of women. But he never went back.
Years later he told me why. You see, all the people who were in that meeting were really, really angry. And after a while they sounded to him just like some of the people he grew up with in the segregated south and who he knew from his childhood: they were angry, afraid, and scornful with that scorn that comes from a kind of self-righteousness. They brought with their fear of women priests all their other anger and it added up to a kind of irrational rage. He still did not like it that women were going to be ordained, but not enough to spend any more time with this group.  Many years later, he told me later that being with that group was like having his eyes filled with Jesus’ mud.
Just because you’re not blind does not mean that you can see. It took time for Pop to see,,,to wash away that mud in whatever pools of healing he was led to.

Over the years he got to meet and know and work with ordained women until he met my friend the chaplain and began to mentor her as grandfather teaches a granddaughter. When I heard this story from her, a whole series of lights went off for me—because if my father could move in his middle age through the mud of his life from blindness to sight and then from sight to vision—then maybe there is hope for me, too?
I think this is how it works for all of us.
Spiritual blindness is a kind of fog that creeps up on us.
There is blindness and then there is blindness. There is the blindness that comes from not being able to see. And there is the blindness that comes from choosing not to see what God has put before us.
And there is sight and then there is sight. There is the sight that comes from resting in our own knowledge, our own power, and our own keen sense of the world as it is. We may think we are being realistic in our skepticism, but we may simply be locking the door on grace. There is another sight, a sight that brings vision. That is beginning to see ourselves and creation as God see...as loved, cherished and worthy of being renewed.
There is sight that sees God at work in simple acts of kindness. There is vision to see God at work in the care for the poor, the outcast and the lonely. There is light that comes from encountering the face of Christ in every person that God brings to us.
The world sees Jesus as a long ago figure of history and myth. The realists in the world see our faith as a desperate allegiance to a good man who failed miserably on an executioner’s cross. The skeptics see us people sadly deluded. They can see that for themselves!
But we who have been made from the very elements of the earth, have been touched by Jesus, and washed in the waters of baptism, and who have seen the Christ in faith, in sacrament, in community, in the faces of our neighbors, have a different vision. We have seen a mere glimpse of what God sees: a people capable of love, of faithfulness, and compassion, and a creation full of wonder and possibility. We don’t claim to see everything. We are still learning how to see. And in Christ, God removes our blindness gives us sight that really sees.
Posted by Andrew Gerns at 5:46 PM

Email ThisBlogThis!Share to TwitterShare to FacebookShare to Pinterest
Labels: Being a friend and apprentice of Jesus Christ, Bible, Lent, Scripture, Sermons