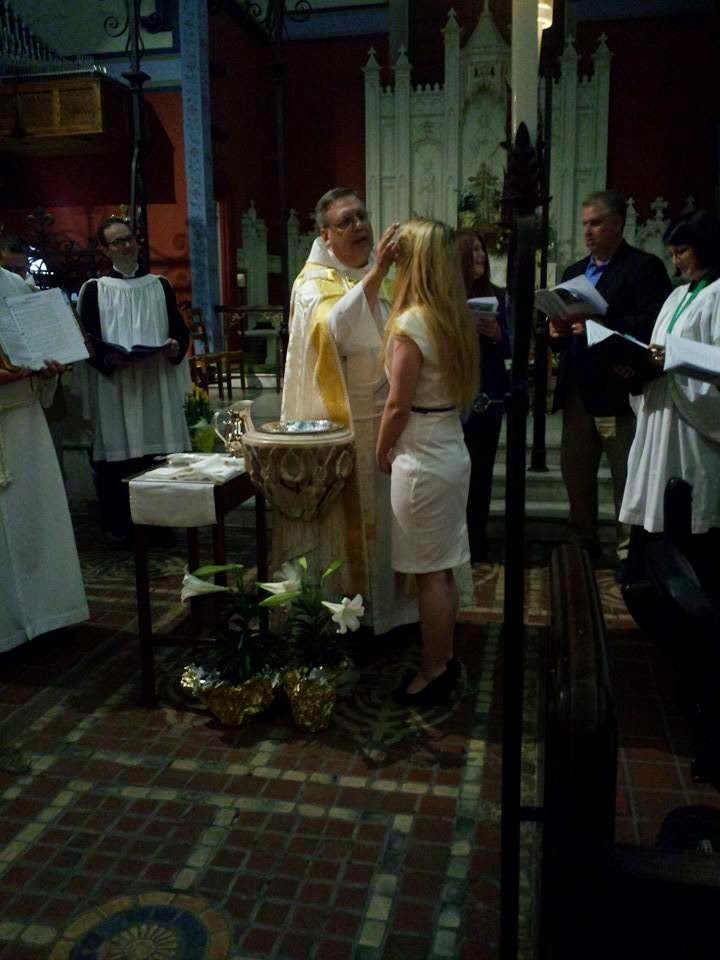 A Sermon for the Easter Vigil, March 19, 2014
At the baptisms of Melissa Ashley Bilza and Jessica Rose Floray
Once upon a time a man walked into a small country church and asked the preacher about being baptized. After some conversation, the pastor agreed and on the following Sunday the two men along with the members of the small church gathered at the river for the big moment.
They waded into the river, and the preacher took the man by the shoulders and shouted “Do you believe?”  “Yes!” the man said, and with that the preacher pushed him way under the water until the bubbles got smaller and smaller and then after a moment pulled him up.
“Do you believe?” the preacher shouted again. Spouting water from the first question but still determined, he nodded his head and once again the preacher pushed his head under the water and then after a moment, pulled him to his feet.
A third time, the preacher shouted into the man’s face “Do you believe?”
The man pushed the preacher away and said, “Yes! I believe! I believe you’re trying to drown me!”
All of which is to say that Baptism can be a little overwhelming.
While we did not march down the Delaware and we will not dunk Melissa and Jessica in the river, and just because I am going to pour water on your heads at that font, don’t think for one minute that we Episcopalians don’t immerse.
Episcopalians live our baptisms through immersion. Every day.
Take tonight’s liturgy. What we did today was immerse ourselves in a whole lot of symbolism. We lit and blessed a brand new fire and we held candles in the darkness to remind us that in Christ, God drives away the darkness of death and sin and brings light to our lives. We steeped ourselves in Scripture, hearing again snippets of the long story of how God has never forgotten us. We heard that from the moment of our creation and all through our history God has worked to save us from the consequences of our sin…right down to this very moment. We have sung ancient and new songs of hope and worship and expectation. We have joined with Christians all over the world who tonight carry the same light and sing the same songs and tell the same story. We have joined with Christians who have been doing this for centuries.
We have engaged every sense in telling the story: sight, smell, sound, taste, and touch to remind us that God is engaging our whole being, our minds, our hearts, our imagination, and our ethics. What you two women are doing tonight, and what every Christian does in their baptisms, is to immerse yourselves in a new relationship with God in Jesus Christ.
The Apostle Paul is talking about this kind of immersion when he asks the Christians in Rome “Do you not know that all of us who have been baptized into Christ Jesus were baptized into his death?”
He is saying that when we go down into the water it is like going down into the grave. And we come up out of the water, it is like stepping back into life.  He says that we immersed in Christ’s death and in that immersion we are changed, we take on Christ’s life. 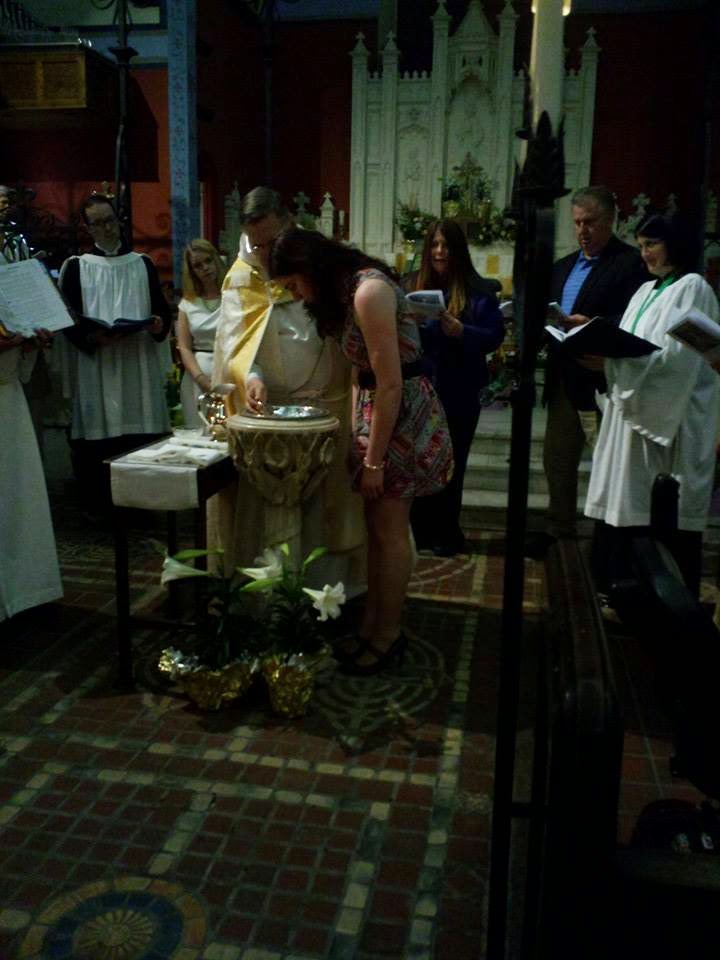 Baptism is the complete initiation into Christ’s body, the Church. But “initiation” in this case is not mere hazing, mere boot camp after which you get a medal or certificate, but “immersion” into Christ. Paul uses the word “with” six times in this short little passage. You are not just joining a club in baptism, you are being immersed into the divine and this will change you.
Have you ever tie-dyed a shirt? What do you do? You bunch up the shirt and tie the bunches together with string and then you dip—baptize!—the shirt in dye. And when you untie the strings the areas that were bunched up, voila, you have a shirt with a new design! And if you repeat the process with different colors, you can get a different funky design. The colors may fade or run or blend with each other but they won’t go back to being a white t-shirt from Target because in the dyeing process the very fabric, the very threads, have changed from their old color to the new.
In the Book of Acts, we hear of a woman named Lydia, who knew all about baptism. She did it for a living. She lived in the Greek city of Phillipi and she was, the Bible tells us, a seller of purple cloth. To make that cloth purple she had to take the wool and bleach it—baptize it in a bleach and water mixture—to get out the impurities. And then she had to baptize it again in the rare purple dye to make into a very valuable, rare and much sought after fabric that all the wealthy and fashionable people wore in Paul’s day.
Lydia, a woman who was both wealthy and the head of a household—a rare thing in the first century—heard Paul preach about Jesus and decided that she, too, wanted to be baptized, immersed into the life of Christ. And so she was, she and her whole household. Lydia was one of the earliest supporters of the brand-new church. I will bet that when she heard the Apostle Paul talk about being immersed in Christ, and coming out new and whole and changed, she knew exactly what he meant.
Being immersed in Christ will change us. As we take the plunge into baptismal living we will discover that God in Christ will have the way of getting into the secret parts ourselves, and changing us in ways we never expect. It is not that we never be without tension, or choice, or difficulty, but rather that we are being changed at the very fiber of our being into the people that God made us to be.
In the early days of the church it was a common baptismal practice for those entering the water to lay aside their old clothes, depicting their surrender of the former life of sin and death. They emerged from the water like newborn babes and then were clothed in new, white garments. According to Eugene Peterson’s version of Colossians in a version of the Bible called “The Message,” it is not just new garments that are put on. No, the newly baptized are "clad in the wardrobe God picked out for them: compassion, kindness, humility, quiet strength, discipline and the all-purpose garment of love." The symbolic garment we will put on each of you, a white stole, is more than a fashion statement. It is another reminder that you have put on Christ.
In your baptisms, you have immersed yourselves in Christ.  You choice to be baptized tonight has led you to be immersed in grace and now be filled with the life of the risen Christ.


So as you have been immersed, immerse yourself in prayer. Take the plunge into scripture and become part of the story of God’s salvation. Steep yourselves in the rhythm of the sacraments, the church’s year, and the church’s time. Wade into the world with acts of mercy, justice and practical caring. Marinate yourself in Christian community, where you find people who far from perfect and who often stumble but who are just as immersed in this ongoing,  unfolding, joyous, spiritual experiment called baptismal living.
Posted by Andrew Gerns at 7:30 PM