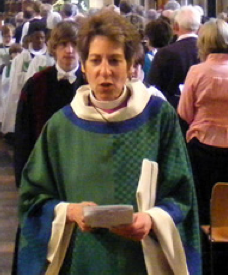 Does this sound as silly to you as it does to me?

Up until yesterday, if you were an Anglican priest ordained in a Church within the Anglican Communion and you were seeking to get a license to officiate in the Church of England, the gender of the Bishop who ordained you might impact whether or not you would obtain permission to function.

This appeared on Thinking Anglicans this morning:

The Questions yesterday evening at General Synod included this question and answer:
Mrs Christina Rees (St Albans) asked the Secretary General:
Q Is there any longer a bar on a man or woman who, having been ordained to the priesthood by a bishop who is a woman in another province of the Anglican Communion or in another Church with which the Church of England is in communion, being given to permission to officiate under the Overseas and Other Clergy (Ministry and Ordination) Measure 1967, so as to make them then to be as a priest in the Church of England, given a Licence or Permission to Officiate?
Mr William Fittall replied:
A The decision taken by the Synod this afternoon means that it is now lawful for women to be consecrated as bishops in England. The rationale for the bar which the Archbishops have operated up to now under the 1967 Measure has therefore disappeared. The gender of the consecrating bishop will be no longer relevant when applications for permission to officiate are considered.


So among the things that changed yesterday when Parliament and the Queen cleared away the final hurdles to women being consecrated Bishops in the Church of England is that apparently any lingering doubts about the validity of the orders conferred by women bishops in other parts of the Anglican communion has been resolved.

When the Episcopal Church regularized the ordination of women in 1976, it did so by simply stating that the canons of this Church would apply equally to women as to men. But there was an allowance for people who did not believe in the ordination of women: that no bishop would be penalized for refusing to ordain any otherwise called and qualified woman nor in placing a qualified woman in pastoral authority in his diocese. No priest or lay person would be penalized for refusing the ministry of women. (Deacons, I suppose, had to live with their discomfort because no one seemed to object when women deacons had the "-ess" dropped off their office and they were integrated in with the other male deacons.)

It was presumed that this refusal would be for reasons of conscience and not simply because the person was bigoted or sexist.

The so-called "Conscience Clause" was passed in 1977 after the then-Presiding Bishop, John Allin, offered to resign rather than accept the ordination of women to the priesthood.

"No Bishop, Priest, or Lay Person should be coerced or penalized in any manner, nor suffer any canonical disabilities as a result of his or her conscientious objection to or support of the sixty-fifth General Convention's actions with regard to the ordination of women to the priesthood or episcopate."


And for the church's women bishops, the "conscience clause" puts them in a House of Bishops that is not unanimously convinced they even belong there. "Obviously I'm not recognized as a bishop by the bishops who say that women cannot be ordained. I'm not valid for them, I'm 'ontologically impossible' -- that's the language that's used," said the Bishop Jane Holmes Dixon of Washington. "Yet I have polite conversations with some of the bishops who don't recognize me. One evening Mary Adelia [McLeod, bishop of Vermont] and I had a very interesting conversation with a number of the ESA bishops. I think most of the people in that room were dumbfounded. You live with the ambiguity."

Of course, some of these folks who thought that a woman being a priest or bishop was simply impossible have left the Episcopal Church and now another denomination has to live with this ambiguity as the price of their independence.

The conscience clause, which became the norm for the Anglican Communion, did not work both ways. If a male bishop refused to ordain or place a woman priest or refuse to accept the validity of an ordination performed by a woman, that was conscience. If that person was called out on their stubborness, then that was just, well, cheeky.

And apparently in the Church of England those who accepted the equality of orders as fervently were for a long time not as fervently protected those who fought to exclude women...for reasons of conscience. So, until yesterday, those ordained by men might expect that their application to officiate in the CofE would be accepted, there was still some lingering doubt about those ordained by a woman. I'd be interested in hearing stories about both male and female clergy whose orders were questioned because of the gender of their ordaining bishop.

This matters not because our Presiding Bishop can now wear her hat the next time she goes to England.

And it doesn't even matter that the paperwork might be a little easier for some American priest seeking to spend his or her sabbatical in England via one of those nifty "housing for work" deals that I hear about (but have never tried).

And it doesn't even matter because in hind-sight the conscience clause caused us more trouble by delaying justice and justifying sexism than the ordination of women ever caused by itself. (Imagine, if you will, if we decided that the exclusion of a whole race from orders was merely a matter of conscience. Oh, wait...! We did that! More than fifteen years after a letter from a Birmingham Jail, the House of Bishops finally turned away from that form of incremental racism in shame while at the very same time the House of Bishops was creating this "appeal to conscience!") We are still learning that it takes a while for us to learn.

So when the first women bishops are consecrated in the Church of England, let's celebrate! But as the first men starts having vapors over the ontological impossibility of it all and claim to be the victims of discrimination, pray for them, and remind yourselves that except for God's grace it was ontologically impossible for any of us to even walk with God, let alone dare to be God's ambassadors of reconciliation.

Email ThisBlogThis!Share to TwitterShare to FacebookShare to Pinterest
Labels: Anglican Communion, Being a friend and apprentice of Jesus Christ, Bishops, For this we had a reformation?, Justice, On being an ambassador of reconciliation

I remember all too well the carried hat. Old white male privilege will fight to the death to preserve itself and it has almost destroyed the CofE. Dumb.

It's important to note that the Port St. Lucie Statement (conscience clause) was adopted at a House of Bishops meeting and never adopted by General Convention. It also, as you mentioned, was never extended to those who objected to bishops' hiding behind it, or using it as a sword to silence opposition to their refusal to ordain women or allow women ordained in other dioceses to function in their diocese. The bishops were so solicitous of the tender feelings of their conservative brothers they were willing to throw their sisters (lay and ordained) under the bus. Same dynamic has played out in the CoE for the last several years.