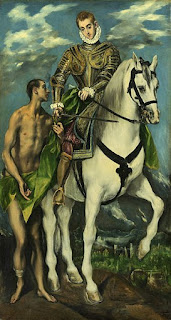 I wonder if it occurred to the diplomats and generals who were working out the Armistice that would stop the fighting in Europe on the eleventh hour of the eleventh day of the eleventh month of 1918 that the day was also the Feast of St. Martin of Tours.

Americans, unless they were devout Catholics, would probably have missed the coincidence. But I wonder about the French, the Germans, the Belgians, the Italians, and the other European nations both Allied and Central powers. Would they have have picked up on the coincidence...and the irony?

Martin was a soldier. He served in an elite cavalry unit as did his father in the army of Imperial Rome. He was a Christian but was a cathechumen until he was 18 or so, when he was baptized. Some say that he served only a short stint, but the most reliable witnesses say he served his full tour of 25 years. Martin was one of these early Christians who apparently would not draw blood as a soldier, but there is a story about how he would lead his vanguard into battle unarmed.

After he served in the military, he entered the priesthood and religious community. He approached vowed life with the same discipline and focus that he learned as a soldier. He had to be tricked into being consecrated a bishop...the legend is that someone ran up to him told that there was a very ill man in the church who needed him and he needed to come now. When he arrived, there was a church full of people.

I love these stories, but it does make me wonder...did every one jump up and yell "Surprise!"?

Anyway, the story goes that he ran way and hid in a barn full of geese. As a soldier, he ought to have known better. Geese were often used as a kind of early warning system for walled towns, so when they made a fuss, the jig was up and they brought him back to church for the ceremony. It is said that he refused consecration unless he could continue to live his religious vows and simple life, which he did.

Martin was known for his mercy. As a bishop, he refused to have heretics put to death and was known for always visiting and freeing prisoners. It's said that magistrates and governors in his see would hear he was coming and find an excuse not to meet with him so that they would not have to be pressed into releasing more convicts, especially politically inconvenient ones.

But most of all, Martin is known for an encounter that took place when he was young, even before he was baptized.

He was riding his horse through town when he encountered a beggar who was naked or nearly so. Martin drew his sword (which must have startled and worried the beggar, I am sure!) and used it to cut his military cloak...his uniform...in half, giving the beggar the lower half.. Later, Martin had a dream that he met the risen Christ on the road...wearing the half of cloak he gave away.

This story, and the veneration of the remaining cloak, became an important part of western European popular piety not just through the middle ages but right through to the 20th century. A chapel in his honor was a popular stop on the pilgrim road between southern France and Spain. Even as France secularized in the Third Republic, veneration of Martin continued especially in the military.

So I wonder, when that first Armistice Day happened in 1918, if there wasn't, at least among a few, prayers of thanksgiving and intercession made through Blessed Martin, a patron saint of France and of soldiers. And even through we now call today's observance Veterans Day and honor all who have served their country in the armed forces, I wonder if we might not also pause from our secular thanks to these men and women and remember the example of Martin of Tours, Soldier, Bishop and witness.

Remember a saint who took on the discipline and responsibility of military service, and yet called Christ his Lord and general. Martin chose to use his power--both as a soldier and as a bishop--in the service of mercy and his discipline in the service of prayer. He advocated for those without a voice, and practiced restraint in the face of his enemy. Above all, he saw in the face of the beggar, the prisoner, and even the heretic, the face of Christ.
Posted by Andrew Gerns at 1:48 PM

Email ThisBlogThis!Share to TwitterShare to FacebookShare to Pinterest
Labels: Being a friend and apprentice of Jesus Christ, Faith and Culture, History, Justice, Leadership, On being an ambassador of reconciliation, Sermons