Six lessons from a missing Jesus 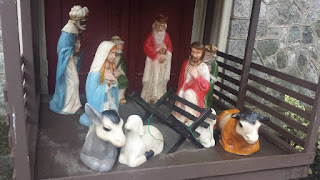 Sometime during Advent, someone made off with the baby Jesus figure in our parish's manger scene right in front of the church. I did not notice the missing Jesus until the Sunday after Christmas.

I put out the word on social media, which generated a newspaper story, and then a story on the local television, as well as various reports on the region's radio stations. The story went far and wide on the internet, particularly through Facebook. We received many kind words of support, offers to help or replace the figure, and even a few jokes and some snarky comments.

On the whole it was a good experience. All of the attention has, so far at least, has not resulted in the figures return but it did give us a chance to put our best foot forward to the community and for some very good conversation...often by e-mail or in social media...among ourselves, the members and friends of Trinity, Easton.

Here are few lessons I have learned from the whole thing.

1. When faced with a crisis, especially one not of your own making, decide early if your stand is going to hopeful or hurtful, compassionate or defensive, arrogant or humble. That means not only telling only what you know, but building a framework of meaning for the crisis that is consistent with your organization's or church's values.

I talked with three reporters during as this unfolded, and all three asked me in one way or another whether this was a "hate crime," or an example of the "war on Christmas." I don't blame them for this; after all, their job is to tell the story and a priest who was red-faced with anger or else calm and forgiving would be part of the story one way of the other.

Besides, these questions were certainly on the minds of their readers and viewers. All you had to do was look at the several comments that appeared on social media and the various web sites, speculating about the motives of the thieves. The comments included everything from assumptions that the figure was going to be sold to buy drugs, to derogatory names attached to the perpetrators. It would have been very easy to join in the chorus of offense.

We chose, more or less in the instant, that we weren't going to go there. That we just wanted the figure returned "no questions asked." It has happened that way once before, there was no reason to assume that it would not happen again.

2. Keep it in perspective.

Behind the hate crime question (and the comments by some folks that this incident was a sign of the general decline of western civilization) was the temptation to catastrophise.

That's why I use the term "disrespect" in response to the television reporter's question about whether this was a hate crime. The act was disrespectful, but whether it was a prank, a bad joke, or a statement about the church, one could not say based on the figure's absence alone. To compare our loss to the real losses and injury experienced by people of faith whose churches are burned down, or who lose their lives for believing, or who are displaced because of their faith is at best silly and at worst narcissistic.

It seemed also to us that the presence of the hungry and the homeless in our Saturday Ark Soup Kitchen is a much greater scandal.

The pain and the sense of loss is real and we need to honor that, but we have to keep it in context.

3. Keep your eyes open for hidden and surprising gifts.

One of the gifts was the discovery that a significant chunk of the congregation had internalized the message that Advent is not the same as Christmas, but is a season of waiting. When everyone, lay and ordained, are necessarily running around getting ready for Christmas--both at home and in the parish--this lesson can lost in all the noise.

But it turns out that people noticed the missing Jesus a long time before Christmas and simply assumed that because it was still Advent, the baby Jesus would not show up till Christmas. So one gift was the realization that our formation works on levels above and below consciousness. In a strange way, the incident showed us to be more fully formed than we knew.

This did not only show itself in a better understanding of the church's calendar, but also appeared in the ability of lay people to think about their faith through this incident in wonderfully creative ways.

And, of course, our neighbors and friends outside the congregation and in our parish, the City of Easton, were wonderful and supportive. Even people of different faiths or of no particular faith, all sent us warm wishes and passed along our story hoping the thief would have a change of heart.

4. We are people with a message.

We started out looking for a lost baby Jesus figure. We found ourselves being messengers of Good News. Media was our friend in this instance. The lesson here is that Christians who have a message of hope should not be afraid to communicate it in ways that our culture understands.

I learned a long time ago in hospital ministry that humor can keep the stress demons away. At the same time, it is important that we stay present to the real pain of people who are hurting. So humor has to happen in the right way, in the right place, and at the right time.

Humor can help keep things in perspective, especially when the phone is ringing off the hook. But don't expect the joke to accepted or understood outside of your context.

I created two things which I circulated mainly among close friends and staff when things started to get a little surreal. One was a fake ransom note created on a thing called "The Ransomizer."

Another one was this: 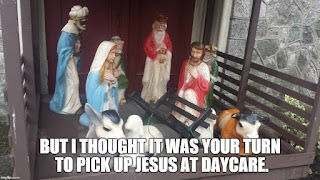 6. In a crisis, the job of leadership is to give direction and to frame the meaning around the event. That means for religious communities being able to think on our feet theologically.

We, of all people, have to be able to ask out loud where God is in the mess and what do we do as faithful people. This is made much easier if the community has done their work beforehand so that they know their mission, have a common language, and have decided what their core stance as a faith community will be.

This is the background for what became a general letter to the congregation that attempts to frame what was going on in terms of our theology and mission.

At Trinity, this work has been going on for a long time. For example, at the rear of our church, near the entrance to our parish hall, is an old "Episcopal Church welcomes you" sign that is perhaps forty or fifty years old. When we built our new kitchen and addition in 2010, we hauled it out of retirement and put it up over the new entrance. It says


"Trinity Episcopal Church
Founded in 1819
A Church for All People"

That's was quite a mission statement! Every day it is a challenge to live into that. Every now and then we succeed. This was a moment when the congregation led the community and in so doing witnessed to the Gospel in a powerful yet simple way.

Email ThisBlogThis!Share to TwitterShare to FacebookShare to Pinterest
Labels: Congregational development, Everyday Ethics, On being an ambassador of reconciliation, Pastoral Care