The hen is in the fox-house 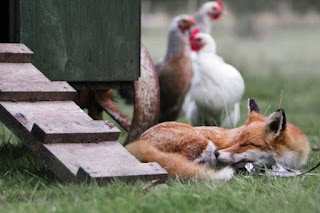 Jesus was in danger and some Pharisees went to warn Jesus.

They said that Herod, the puppet king of Roman occupied Palestine, has it in for you. You’d better leave town before he has you killed!

“Listen!” Jesus says to them. “You tell Herod that ‘the hen is in the fox-house! And the fur is going to fly!'”

Well, okay. That’s not exactly how Jesus put it, but Jesus did liken himself and God to a mother hen who gathers her brood under her wings, and he did compare Herod to a fox. So Jesus took what must have been common knowledge—if  not a common adage—and turned it on its head!

Because we know what happens when foxes meet chickens, right? Lunch!

But not now. Jesus has come to Jerusalem and God’s kingdom is at hand. The hen is truly in the fox-house, and she gathering her brood. Look out, fox!

Once more Jesus tells us that God’s power is found in places exactly the opposite of where we expect.

Herod may have the temple guards and can just send a note to the Roman garrison for back-up, but God is curing the sick, casting out evil, and gathering God’s people. That is Jesus’ standard of success. Not how many cities are conquered, how many votes are tallied, or how much force or violence one can bring to bear. Instead, Jesus’ standard is how many people are healed and how much tangible evil is demonstrably cast out, and how many people turn their eyes to God and welcome the Messiah into their midst.

Of course, the Pharisees are right. Another trip to Jerusalem will in fact result in Jesus’ death.

But that death will result in Jesus going to the ultimate fox-house…death and the grave…where he will even there gather God’s people to Godself and bring them home.  And even though they (and we) will kill Jesus on that cross, in his resurrection, we see that God’s power conquers and overcomes the worst the world can dish out.

Humanity sees fear and responds with big words, power, and even violence.

God names the fear, and confronts evil with love. Evil is met with the very things that evil hates the most. The power of God is found not in the powerful fox but in the hen who gathers her brood and stands between the hunter and the hunted.

And you know he hit home because the politicos were outraged. They demanded an apology! Pope Francis, like Jesus, went to the fox-house, and (oh my!) did the fur ever fly!

I don’t know about you, but every day someone sends me an e-mail or a flyer telling me how to save the church. Other people every day tell me that the Church is dead, and about how irrelevant we’ve become.

Well, look around at what is really going on. Look at the way God is work in this community and many like it across our diocese, the commonwealth…and around the world. And you tell those foxes that the sick are being cared for, the hungry are fed, the homeless housed (even in our church halls and basements), the outcast are welcomed, the addicted are finding recovery, prisoners are being visited, the illiterates are being taught to read, women and children who once knew violence and exploitation are given shelter and new lives, the grieving and the sorrowful are comforted.

You tell those foxes that walls are turning into bridges, and people who had no voice are finding their voice.

You tell those foxes that things which were cast down are being raised up, and all things are being brought to their perfection by him through whom all things were made.

This is the work of God, it is the cross becoming resurrection, it is, as Presiding Bishop Michael Curry says, the dream of God overcoming the nightmare of human sin.


The hen is in the fox-house, my friends, and the fur is really flying! Thanks be to God!

Email ThisBlogThis!Share to TwitterShare to FacebookShare to Pinterest
Labels: Lent, On being an ambassador of reconciliation, Politics and Faith, Sermons