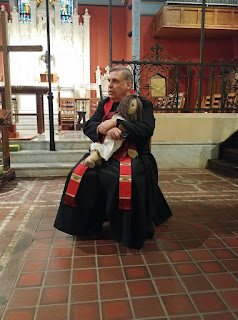 Yesterday, after the noonday Ecumenical Good Friday liturgy, the church was open for prayer and a few people stayed after the service or came in during the silence. And as I sat here, I found myself thinking about another period in my life where I would go to dark, quiet places and meet folks who were alone in their anticipation and perhaps their fear.

Way back in a time we can barely remember, surgeries were not drive-through. There was a time when we didn't do our preoperative tests in a walk in lab, and we didn't check in at Oh-dark-thirty and be hustled through a process like a surgical McDonald's. In those strange times, before managed care, and even before DRG's, we checked into hospital the day or even two before for all that pre-operative stuff. And it meant that we chaplains were in the practice of walking the halls in the late afternoon and early evening, surgery schedule in hand, to visit folks before their operations.

I found that the best time to make these pre-surgical rounds was about a half an hour after visiting hours ended, when people were in their room, curtains drawn, maybe the shared television would be on or not. It was in that quiet, semi-darkness when the chaplain could meet a person at that moment when they were alone with their thoughts and feelings... when anticipation, dread, questions, restlessness, or simply the "can we get this over with?" was most apparent. At one hospital where I ministered, we'd bring cassettes of funny movies, spiritual reading material, stuffed animals, and other things to help people manage their anxiety.

Those of you who have had abdominal surgery may know about cough pillows. They are firm little pillows that you hug about your chest so that when you cough, you won't go "ouch" from having the cough stress your incision and sutures. In the pre-operative instructions, patients were usually introduced to their cough pillow by the nurse.

Some clever unnamed nun somewhere came up with a cough pillow that was a doll that looked like Jesus...or at least our notion of Jesus. I have one here. It was a gift from the staff last hospital gig before I came here.

Cough-Pillow Jesus was tough. He could go through the autoclave and be wrapped in plastic so it would be sterile. He could be squeezed and held tightly without losing his shape. Kids would like to undress and dress him and fix his hair (sometimes even adults would straighten his outfit to make him more presentable!).

For me, Cough-Pillow Jesus is a perfect icon for what is happening on Holy Saturday.

Yesterday, during those quiet three Good Friday hours, I was sitting here in the church, while the whole world was going on without us. There were car horns, trucks, sirens. I heard people greet each other as they walked by, a shouted conversation from one side of the street to another. Some school kids were laughing as they cut through the church yard from here to there. Music made its Doppler sound procession as the car it came from drove past, the sound gradually getting louder and then suddenly fading away. In the distance I could hear a long freight train as passed through. The world was going on its merry way.

All I could think of were the Gospel lessons from Christmas. The Gospel of John says that the Word became flesh and dwelt among us. It also says that while He spoke the world into existence, the world knew him not.

I think that's what was happening for Jesus as he died on the cross. Sure, for the people most involved with the crucifixion, watching Jesus die, then going through the work of laying him in the grave, they were all caught up in the all that was happening. It was all their focus. Like the film we saw on Wednesday, there was drama, politics, fear, running away, covering bases, and simple horror.

But in the end, that's a pretty small circle. My hunch is that most people in Jerusalem that weekend walked by the three men being crucified wondering if they could find a place to stay, or expecting the Temple to be crowded, or if they still get a decent lamb for the holiday meal because, well, guests are coming and there are things to do.

So today, the followers of Jesus sit with the enormity of the cross asking themselves what's next But the world has moved on. Just as the community Easter Egg Hunts go on without us and without a word of cross or empty tomb, the rest of the world goes about its business.

And that's what those darkened, hushed corridors of that hospital were like long ago. Silent. Anticipating. Worried. Wondering. Mortal. And we'd hug Jesus even more tightly.

Because while all that is going on, unknown to us, but quietly, Jesus who has died has gone to the place of the dead-- and to the places of our deepest anxieties and fears, he goes to the places that we have locked away in the darkest places of our hearts, and meets us. There are no more words. There is just Jesus.

And when God meets us in that place--that sometimes scary place--and holds us, lifting us away from death and isolation and anxiety, into a new life. An Easter life.

But today, there is waiting. And we hold on knowing that in Christ, God has entered that holy, empty space.
Posted by Andrew Gerns at 11:17 AM