I knew a guy who is given to motivational sayings in his teaching and leading. He is in charge of the education and development of healthcare professionals so he thinks about people learn how to work a fire extinguisher to how to do CPR to making sure nurses and allied health professionals get their continuing education. It’s a big job, and so it is no surprise that he is given to motivational sayings and those posters that show up in workplaces (and which get made fun of on the internet).

So when I read today’s Gospel, I thought of my friend and one of his motivational sayings, which was originated by Stephen Covey: “Always remember to keep the main thing the main thing.”

In the Gospel of Luke, we see that distraction from the “main thing” happened just as much in Jesus’ day as today.  A group of Sadducees, one of the many parties in the Jewish religious culture of that time, wanted to trick Jesus into saying something controversial by asking him a question about marriage and resurrection.

The set up for this question is very, very, strange: One of seven brothers marries a woman and had no children, and then he died.  According to an ancient custom, they say, the brother of the widow married her, and the same thing happened to him--no children and then death.  All seven brothers married the widow and all met with the same fate--you guessed it--no children and inevitable death.  The seven-time widow eventually herself died.  Now came the perplexing question.  "In heaven whose wife of the seven is she?"

It’s a good thing this question went to Jesus, because I would have said, "Uhm. Huh? What?”

And then I would have called in Leroy Jethro Gibbs from NCIS because something very fishy is going on here!

The question, of course, is a zinger. How do we know that? Well, for one thing, that ancient custom that was posed to Jesus? No one actually observed that custom even in Jesus’ day! Widows were widows, and they had their own particular challenges in the culture of Jesus' day. If the system that the questioners proposed actually worked that way, then all those accounts of Jesus and the early church encountering and caring for widows just would not have happened.

No doubt about it. The question is a “gotcha.” It is meant only to make Jesus look silly. But he doesn’t take the bait. Instead he reminds them that God is God of the living, not the dead.  He is basically saying, "Our concern should be about the living."

But look! It turns out that talking smack, trolling, and living in political and religious silos were not actually invented by the internet! They aren't reserved to bullies and certain kinds of pundits and politicians. They’ve been around since, well, forever! The only thing that's change is the technology. 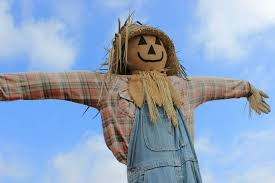 If you think about it, these Saducees that confronted Jesus are very familiar. We've all run across them. First, we have to recognize that Luke has grossly generalized a whole class of Jewish believers (whom he probably never actually encountered but may have heard about) and turned them into straw-men for Jesus to knock down.

But Luke gets away with this because broadly speaking, we've met these characters before... maybe at work, or on talk-radio, or your favorite news channel, or that loud guy at the end of the bar.

You know the type: these are the ones who love being right. The ones who feel smartest by making other people look dumb (which is the game these guys were playing with Jesus). They think of themselves as worldly and all knowing. I'll bet that the ones Jesus encountered probably laughed among themselves at Jesus and his ridiculous teaching like that silly Sermon on the Mount.

These are folks who do not respect people they disagree with. When they confront Jesus, they came up with a world-class silly question out of their disrespect. How little did they respect Jesus? I don't know but I am sure that when they heard that Jesus walked on water, they sneered because he clearly didn't how to swim!

This is why what passes for political discourse in today's culture is so poisonous. I don't care if you're Michael Moore or Anne Coulter, or any of the rest, the technique is the same. Characterize, slander, belittle, and disrespect your opponent... and that is anyone who disagrees with you... or anyone who questions your line of attack, er, argument.

As so, they loved to argue. They didn’t need talk radio, cable news, and Facebook memes to argue about picky, silly stuff. And they loved to belittle those who did not think as they did.
But that leads to the thing I love most about this encounter.

Notice that when Jesus answers the very silly question, he isn’t talking to them. Why should he? He’s not going to change their minds. Jesus won’t play their game. He allows them revel in their rightness.

Instead, he speaks to all the people around Jesus who are curious, or bewildered, or just trying live from day to day. In other words, he speaks to us.

Because, as far as Jesus is concerned, convincing smug people with clever questions is not the main thing! Drawing ordinary people in closer connection to God, each other and creation…that is the main thing. Returning humanity to God and to faithfulness and wholeness was his task... it is the whole point of the incarnation, passion, crucifixion, resurrection, and ascension. To return us to unity with God, humanity, and creation.

When Mark shares his version of this very same encounter in his Gospel, we see someone listening in who at once "gets" what Jesus is about, and sees through The Very Silly Question.

In Mark (12:28-33), there is a scribe, a person who can read, write, and faithfully copies the scriptures, who overhears this conversation and has apparently had enough. He interrupts and cuts to the chase. He reminds us of the main thing. He asks Jesus a question which exposes the silliness and gets to the main thing:

To love God and to love neighbor as yourself, that’s the main thing!  Who cares who will be married to whom in heaven; it is all about loving God and loving neighbor!

To love God and to love neighbor--so simple, yet we make it so difficult.  But the way to fulfill these two commandments does not with addition or multiplication but through subtraction.

Contemporary Culture is plagued by a passion for possessions...more is better...the result is that the lust for affluence in contemporary society has become psychotic....We feel strained, hurried and breathless....Christian simplicity frees us from this modern mania....People once again become more important that possessions.

Christian simplicity is not only about being released from things, it is also living a life free of anything that draws us away from God and from being truly, wholly human.

Clever, insulting political memes in your little internet silo: not the main thing! In fact, the only one for whom shutting down your opponent with your cleverness is the Enemy! Evil just loves it when you are reveling in your rightness and condemning of those who disagree or differ from you. Because as long as your reveling, you're not listening. As long as your put up those witty memes or cutting remarks, you're not looking at your opponent as a person but as a thing, and that this a first step away from the Way of Love.

But, just as Jesus did, you have a choice. Keep your eye on the main thing.

Getting together with neighbors and building home for the poor:  that’s the main thing!

Serving hungry people at a community meal or visiting a home-bound person or listening to and praying with a friend in pain:  that’s the main thing!

For the past several weeks, we have been hearing stories of faith from several different members of the congregation. In a few minutes, you will hear one more. I have really enjoyed hearing each of these accounts of faith, because they are—each and every one—a story of how these extraordinary everyday Christians, your companions in faith, keep the main thing the main thing.

We have learned how our sisters and brothers in Christ have both handled significant challenges, and we discover how God is at work in us helping people grow in their faith and stay grounded in God.

We have again heard real-life examples of how to be Jesus' friends and apprentices.

When you think about your place in the Church and your life of faith, we can choose to get caught up our selves and our egos and insecurities—looking to always be right, striving to be on the top of the heap, trying to always do things the way we’ve always done things—or we can be faithful stewards of God’s gifts, grace, and mercy to communicate the love of Jesus everyday.

The question before us, and what Jesus shows us today, is that how we use what we have and how order to our relationships so that the main thing— loving God with all our heart, soul, and mind, and loving our neighbor as our selves—is always, in this moment and in every encounter, the main thing.

Email ThisBlogThis!Share to TwitterShare to FacebookShare to Pinterest
Labels: 3n1-1n3, Everyday Ethics, Faith and Culture, Mission, On being an ambassador of reconciliation, Religion in the News, Scripture, Sermons, Theology