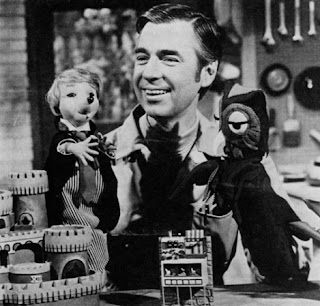 The song reminds us that God loves us because that’s what God does and who God is.
And the song reminds us that we are loved exactly as who and how we are.
Finally, the song reminds us we are built to love.
You don't ever have to do anything sensational to receive that love. So when, after Mr. Rogers, I say "it's you I like," I'm talking about that part of you that knows that life is far greater than anything you can ever see or hear or touch-- that deep part of you that allows you to stand for those things without which humankind cannot survive.
God loves us exactly for who we are. We are called to love each exactly for who we are. In these fractious times, we need that love more than ever. Mr. Rogers reminded us that we are invited into, and called to live out, practical, daily, useful, over-flowing love. It is this kind of love that conquers hate, this kind of peace that rises triumphant over division, and that kind of justice that proves more powerful than greed.

This is my Rector's column for the December, 2019 issue of Glad Tiding, the e-newsletter of Trinity Episcopal Church, Easton, Pennsylvania.
Posted by Andrew Gerns at 1:04 PM

Email ThisBlogThis!Share to TwitterShare to FacebookShare to Pinterest
Labels: 3n1-1n3, Being a friend and apprentice of Jesus Christ, Columns, Faith and Culture, Media, On being an ambassador of reconciliation, Peace, Politics and Faith, Real Life Ethics, Religion in the News, Theology