Challenging Jesus On The Way 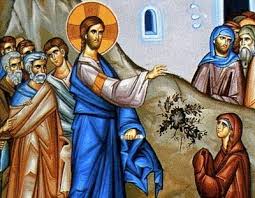 There is something strange going on in today’s Gospel. Did you notice? Maybe it struck you as odd but you shrugged it off because it doesn’t fit with how we typically read the Bible… but there it is as plain as day. Did you notice it?

Isn’t it strange how it is the Gentile woman who teaches Jesus? Yes! In today’s Gospel, Jesus the Rabbi goes to school!

This underscores an aspect of the Gospels that we often overlook: Jesus teaches, yes; and he certainly heals and shows power; but there is something else, Jesus learns and he changes. What was said about Jesus as a child—that he grew in wisdom and knowledge—is still happening for the adult Jesus in his three-year mission: Jesus learns. He grows in wisdom.

Wisdom is a constant theme of many movies, TV shows, literature, and even graphic novels, although it rarely described as such.

Remember The Matrix? Neo undertakes a journey to discover his role in overthrowing the Matrix starting with his first meeting with the Oracle, a grandmotherly figure peering into an oven baking cookies, in an apartment where the students hang out as if they are doing their homework after school.

In The Empire Strikes Back, Luke Skywalker learns the ways of the Force under the tutelage of the ancient Jedi master Yoda, who seems at first to be an eccentric, slightly annoying little creature but turns out to be steeped in ancient wisdom.

The film The Way, director Emilio Estevez cast his father, Martin Sheen, as a man named Tom who walks the Camino de Santiago, “The Way of St. James.” through northern Spain. Along the way he encounters all kinds of people and discovers the difference between the “life we live and the life we choose.”

Recently, I have been following the latest iteration of Star Trek, which is built around an older, wiser, Jean-Luc Picard. Part of the story how he imparts hard-earned wisdom to his younger cohorts—and, most of all, the wisdom that they impart to him!

In the Hebrew Scriptures, Wisdom is the personification of God’s knowledge, God’s creativity and God’s transforming love. Rather than focusing on the power of God that sends plagues to Pharaoh, parts the Red Sea or in those other “big” miraculous things, Wisdom is a way of meeting God that involves other ways of knowing. It is more intuitive, depends on our senses, and comes out of reflection, artistic expression. Wisdom is where heart, emotion, and thinking meet.

So it makes sense that when the earliest Christians looked for ways to describe their encounter with Jesus, it was the Wisdom literature that spoke to them the most. Their experience of Jesus was not just of a person who did powerful things, but their encounter was one that opened their eyes, their hearts, and their minds to the very presence and person of God. In Jesus, they experienced both the knowledge of God and the welcome of God.

This is at the heart of Jesus’ encounter with the foreign woman in today’s Gospel. Jesus and his disciples went into a Gentile region near Galilee when a woman from those parts asked him to heal her daughter. At first, he flat-out ignored her. He wouldn’t even acknowledge the request.

She shouts after Jesus and the disciples. Finally, he turns to her and dismisses her saying that he had been sent only to the Jews – not to Gentiles like her. It seems to me that he is trying to let her down a little gently, but the way the Gospel writer frames this, one can't help but catch a note of irritation in his words when he says that “it is not fair to take the children’s food and throw it to the dogs.” Did you hear that? Jesus calls her a dog!

Still, with courage and desperation, she persisted. “Yes, Lord, yet even the dogs eat the crumbs that fall from their masters’ table.” Finally, the picture begins to make sense. Jesus commends her faith and affirms her as a beloved child of God. “Woman, great is your faith! Let it be done for you as you wish.” And her daughter was healed instantly.

I don’t know about you, but whenever I come across this story, it startles me because it does not fit with my picture of Jesus, who acts in an arbitrary, harsh, and unloving manner—until she changes his mind!

For centuries, preachers have struggled to make sense of it—and to explain away Jesus’ apparent bad behavior, perhaps trying to save Jesus from himself.

Some say that the Greek word Jesus used for “dog” really means “puppy.” (Uhm, no. It doesn’t.) Some say that Jesus treated the woman harshly in order to test his disciples’ understanding of God… which strikes me as making Jesus say “I was only joking!” when he wasn’t!

Some say that he was critiquing the cultural norms of the day… really? By being rude? The problem is precisely that this text is not in keeping with the many other straight-forward ways that Jesus chided the powers- and customs—that be.

Here’s an idea. Maybe it was the Gentile woman who taught Jesus! And the early Church remembered the encounter because they too were learning that lesson over and over again themselves! The lesson? That God’s reign is bigger than tradition or culture and much bigger than “the way we’ve always done things.”

Remember, Jesus grew up in the first century and that he lived his early life only among Palestinian Jews. He spent almost all of his ministry among Jews – the children of Israel. His training was Jewish. His bible was the Hebrew Scriptures--what we call the Old Testament. He lived in a social and religious culture that saw Gentiles as “other,” often as unclean, or taboo.

Was Jesus was stuck in such a mindset? And then, when he came to a place where Gentiles lived, he encountered this persistent woman. And did this encounter cause him to re-think commonly accepted views about Gentiles?

Whatever happened on that road between Jesus and the woman, those early, first century Jewish Christians were starting to see their Gentile Christian companions in a new light!

In short, in this story, Jesus is standing in for an early Church that was learning something new.

So, when we read Jesus saying “I was sent only to the lost sheep of the house of Israel” the people really speaking were those early Christians who saw themselves as an extension of Judaism, who perhaps wanted to stay in that bubble. And I think that the Gentile woman is standing in for all those brand-new Gentile Christians who were saying “what about us?” I see her words as a mirror held up in front of us-- of whatever our common understanding of Gospel or Church might be!

Jesus’ mind might have been changed, but the real news is that the early Church—the Church of Matthew’s Gospel—was definitely changed! They were going out from Palestine into the wider world of the Roman Empire; and they were leaving the Synagogues of the Diaspora and going into new communities, and discovering over and over again that Jesus’ teaching, the Holy Spirit, and the grace of God was changing people in unexpected places and in unexpected ways. They were discovering people about whom they would say “…Great is your faith! Let it be done for you as you wish.” And in that they found healing!

In this transformation we see the challenges and inner struggles faced by every succeeding generation of Christians. Their transforming, God-provoked re-imagining of a long-held, commonly practices mirror and inform the struggles we experience ourselves in a troubled culture during this excruciatingly troublesome year.

Amid a global pandemic, struggles over our long history of racial inequality, the ways we understand Jesus, the Gospel, and the role of our faith must necessarily be challenged.

Jonathan Daniels was a seminarian who grew up in Keene, New Hampshire and attended the Virginia Military Institute and eventually the Episcopal Theological Seminary in Cambridge, Mass. In 1965, he answered the call to go to the South and help register disenfranchised black citizens to vote. And on August 14th, he was jailed in Haynesville, AL, along with six other Freedom Riders including a Catholic priest. After six days in jail, they were released but while waiting for a ride, they were confronted by a deputy sheriff who aimed his shotgun at a young girl, Ruby Sales. Daniels pushed her aside and was killed in the blast. The priest was wounded trying to protect the others. Ruby Sales continues to be an activist for civil rights and justice to this day.

Maximillian Kolbe was a Franciscan priest in Poland who overcame his early, learned anti-Semitism and when the Nazis invaded his country sheltered Jews fleeting the Holocaust. For this he was arrested and sent to Auschwitz-Birkenau. In 1941, when a prisoner escaped, ten other prisoners were rounded up to be executed. Kolbe stepped in and volunteered to die instead of one of the others. He is remembered as saying "I want to die in place of this prisoner." And on August 14, 1941, the Nazis took Franciszek Gajowniczek out of the line and executed Kolbe instead. He was canonized in 1982 by Pope John Paul II.

I don’t know if I would ever have the courage of either of these two saints, but their example inspires us to seek faith where it will be found, to speak out against racism, tyranny, and bigotry in all its forms. The story of the Gentile woman challenging Jesus is the story of the Church—of us—being challenged every day to see the face of Jesus in the faces of all the people God gives to us every day. It is this unexpected wisdom from unexpected places that reminds us of our baptismal promise to seek and serve Christ in all persons whoever and wherever they may be.

From a sermon given on Sunday, August 16, 2020 at Trinity Episcopal Church in Easton, PA, for the Eleventh Sunday after Pentecost (Proper 15 A, Track 1).

Email ThisBlogThis!Share to TwitterShare to FacebookShare to Pinterest
Labels: Being a friend and apprentice of Jesus Christ, On being an ambassador of reconciliation, Racism, Sermons