In Christ, our liberation is bound up in each other 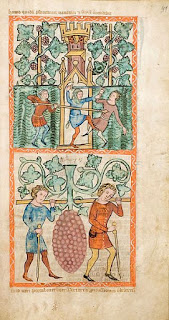 Today’s Gospel contains a truth that is very hard to accept. How hard will depend on who you identify with in the story.  As long as we think of the bad guys in Jesus’ story as someone else, we can jeer and catcall and relish in the comeuppance they get. But if begin to see that the violent, greedy stewards who kill the messengers as us… well, that’s another story.

In Jesus’ parable in Matthew, a landowner gives over the operations of his vineyards to some tenants. He sends people to the vineyard to retrieve his income and to get an account about how they are caring for the vineyard. In each case, the messengers are beat up or even killed. Eventually the landowner sends his son thinking that they will respect him. But the tenants do to him what they did before: they murder him.

Now, notice what comes next: Jesus doesn’t end the story but asks the ones to whom he is telling it to fill in the blanks. “What do you think the landowner should do?” They say, “Punish these brutes and put them to a miserable end!” Jesus then turns the tables of his critics and says, “the stone which builders rejected has become the chief cornerstone.”

This parable was remembered by Matthew’s church as an explanation for why the Church was becoming more and more Gentile, while becoming less and less Jewish in their populations and in their traditions. In short, Matthew is saying “you had your chance; now there is a new chosen people in town!”

I always approach this passage with great care, because it has been the vehicle and justification for two millennia of often violent anti-Semitism and Western white supremacy.

So be careful! As soon as we begin to think that the Church or the Gospel, is our personal possession, or that we have the right answer for a “perfect” church, we are setting ourselves up to take the role of the possessive stewards in this story.

If you don’t believe me, look at how the history of the Church is filled of moments when otherwise faithful people have gotten the bit in their teeth and have run rough-shod over the very church they were trying to preserve or reform.

One hundred years ago, an Episcopal bishop named Paul Jones was driven from his office for speaking words of peace during the First World War.

Not ten years later, another Episcopal bishop, William Alexander Guerry, was assassinated in his own office by a priest of his own diocese of South Carolina, because Guerry bucked the Jim Crow segregation that had taken hold of the church when he wanted to not only desegregate the churches but elect a black suffragan bishop.

I love the identity statement of the United Church of Christ and sometimes wish it were our own. It says, “God is still speaking.” But can we discern that voice when it comes to us?  Sometimes we refuse to attend to that voice, and sometimes we interrupt that voice and talk over what God is saying to us. In either case, we essentially kill the heir hoping to receive the inheritance.

I think of this every January when Martin Luther King’s birthday rolls around. How many of us participate with civic, religious, and business leaders, replay a small portion of his 1963 Lincoln Memorial speech—the “I have a dream” speech—tip our hat to racial equality and for the rest of the year ignore how we both participate in and benefit from a system of racial division that is still present 400 years after Europeans first set foot on this continent? Yet, as soon as someone proposes something concrete about addressing the roots of racism, let alone echoes a mere slogan, how often are we are the first to say “Yeah, but… all lives matter!”

Looking back, we remember with shame the church’s response to prophetic voices concerning racial injustice, the role of women, and the full inclusion of LGBT persons. You don’t have to look far— everyone loves Dietrich Bonhoeffer, the 20th century martyr, until we realize that his critique of “cheap grace” is really talking about our complacent use of the church and her sacraments to maintain the status quo. Everyone loves Pope Francis’ warm inclusiveness until he starts to talk about economic justice and calls on us (and his church’s hierarchy!) to live more simply. Suddenly, the cry is “what does he know?” and “Why can’t he stick to ‘moral’ issues?” as if race, peace, poverty, and economic power are somehow not moral at their core! 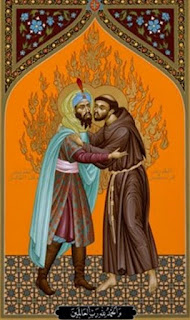 And every year, we come to the Feast of St. Francis and bless our pets, which is a good thing, but we do Francis an injustice if we stop there. If we really look at Francis and his view of animals in comes much more closely to what now call "creation care." And his attitude towards the poor was both radical and deeply compassionate. Some wonder if he did not come home from the Crusades suffering PTSD, which might explain some of his stranger behaviors (like going about naked in public) but also points us to an attitude toward peaceful relationships quite extraordinary for his day--and ours!

In a famous encounter, St. Francis of Assisi took a risk when he crossed the battlefield between European Crusaders and Arabic Muslim forces near Damietta, Egypt, and met with Sultan al-Malik al-Kamil and preach his faith in Jesus Christ. He did not convert the Sultan but he opened a dialogue that would eventually lead to peace between the warring sides.

So, if we simply domesticate Francis and restrict him serving only as a patron for our pets, we will miss the radical vision for the Church as a vehicle for peace and justice to bring about reconciliation among people and nations.

The behavior of the landowner in today’s Gospel in confronting the wicked tenants may be hard to accept, but it is familiar! It is the behavior of God! Like the landowner, God sent prophets to teach the scriptures and proclaim the demands of justice, and that message was condemned and rejected. God tries again and again until even his Son Jesus is met with rejection and death. But the voice of their prophecy is never extinguished, for nothing can stop the word of the Lord.

So how does this story of rebellious tenants and the long-suffering landowner end? We are offered two conclusions.

The first comes from those who are gathered around listening to Jesus. In their indignation and horror, they cry out that these rebellious tenants be put to a miserable death – and then be replaced with honest substitutes. They advocate exclusion and violence, an ancient and popular notion… that leads absolutely nowhere!

Jesus has another idea. He quotes the psalms: “The stone that the builders rejected has become the cornerstone; this was the Lord’s doing, and it is amazing in our eyes.”

So instead of fighting evil with still more evil, Jesus offers a different way. He says that it is precisely the rejected stone is the foundation something new! The Gospel, of course, is talking about the death and resurrection of Jesus, who was rejected, betrayed, and abused by those around him. Who, in his rising from death, becomes the cornerstone for a new creation rebuilt from the ground up.

There are lots of more recent examples that show how rejected stones become central to what is built.

During the Nazi occupation of Denmark, the Danish king, King Christian the Tenth, rode his horse daily through Copenhagen streets, surrounded by applauding crowds. He told the Germans that he would risk death to keep the swastika from flying over his castle, and they relented from displaying their flag there. These acts of defiance turned the king into the cornerstone of the remarkably successful Danish resistance that featured schoolboys, amateur saboteurs, and underground clergymen who kept the Nazi killing machine off balance for years. The Germans wanted normalcy in Denmark, and the resistance movement worked through strikes and other actions to deny them that. A prominent indication of their success was how a majority of Danish Jews were safely transported to neutral Sweden through the help of their fellow citizens.

Back in 1986, Ferdinand Marcos was reelected as president of the Philippines in an election tainted by widespread electoral fraud. Martial law was imposed, and Marcos made personal loyalty the criterion for military promotions and economic privilege. But the People Power movement led by Benigno "Ninoy" Aquino, Jr., and, after his assassination, by his wife Corazon, stood up to the regime. When civilian protesters met military units that refused to fire on their fellow citizens, it was not long before Marcos went into exile.

Remember Nelson Mandela, who for decades was an inmate in a South African jail? He became the first elected president of the new South Africa. When he was sworn in on May 10, 1994, the former prisoner who became president vowed that “never, never, and never again shall it be that this beautiful land will again experience the oppression of one by another.” Once rejected, he became the cornerstone.

An Australian aboriginal activist named Lilla Watson said, “If you have come to help me, you are wasting your time. But if you have come because your liberation is bound up with mine, then let us work together.” How will you and I put this truth into practice, not simply in what we say, but in how we live?

We might start by recognizing that whomever we call an enemy comes to us bearing a gift, and that we when meet our enemy we are meeting ourselves. Because each enemy comes to us bearing some broken, rejected part of ourselves. By accepting that enemy, we accept back that part of ourselves. By continuing to reject that enemy, we remain in a fragmented state inside. Acceptance of our enemy, welcoming the other, embracing those we would cast out, means we are changed and so is our enemy as we are together propelled toward a new and unexpected creation.

We affirm in our Creed, that when Jesus was crucified, “he descended to the dead.” Before going to resurrection, he went to the place where death reigns and meets us in those places inside us, in our culture, and in our deeply ingrained history that deals death and works against life and wholeness. He meets our rejection and violence with love and transforming power. And in his resurrection, he makes it possible for us to meet our enemies with new, transformed eyes. He leads us (as our Prayer Book says) “from prejudice to truth… [delivers us] from hatred, cruelty, and revenge,” and makes all of us able and ready to stand reconciled before our Lord and Savior Jesus Christ, the chief cornerstone of God’s renewed creation.
Matthew 21:33-46
Posted by Andrew Gerns at 8:57 PM

Email ThisBlogThis!Share to TwitterShare to FacebookShare to Pinterest
Labels: Being a friend and apprentice of Jesus Christ, Economics, Environment, Everyday Ethics, Faith and Culture, Justice, On being an ambassador of reconciliation, Peace, Politics and Faith, Sermons, Theology