Voting with ethics, compassion, and hope. 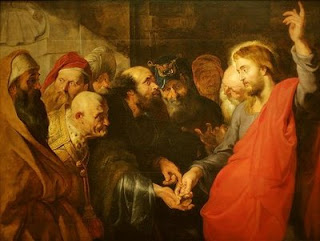 People came to Jesus with all kinds of questions. And a question the every person who lived in Palestine struggled with was how to remain a faithful Jew and also a good subject of the Roman Empire-- especially when all the power of the Empire told you every day that you and your people were "less than."  But even today, it's a question we still struggle: how to be a faithful Christian during this tumultuous election season?

People came to Jesus for all kinds of reasons. Some people came to learn and some to challenge. Some wanted to trip Jesus up and make him look silly. So when members of two groups who typically disagreed with each other got together to ask the same question, it was just because out of their mutual suspicion of Jesus but the question was always of people’s minds and hearts.

They asked Jesus about the taxes required by the occupying Roman Empire. This question went deeper than their 1040-EZ, though. They wanted him to pick sides. His answer the lawfulness of paying taxes to the Emperor would tell people which side he was on: with the Herodians (pay the taxes!) or the Pharisees (keep the money…or put it one of the temple charities).

Remember when Jesus chased money-changers from the outer courts of the Temple? The money was already a hot-button issue! Because one could not do Temple business with pagan currency. Because the image of Caesar on the coin was considered idolatry. Bishop Nick Knisely of Rhode Island says in his blog today that the question put to Jesus is one of division and in response Jesus offers comprehension.

When Jesus asks for one of the coins used in paying the tax, he exposes the hypocrisy of the question, because it was obvious that one of his interrogators was carrying around the coin that little pocket idol: a silver Denarius with the image of Caesar on one side, and, on the obverse, the image of a woman named Pax or personified peace. A graven image…right there in their pocket!

Anyone could have answered Jesus question, even without a coin in hand. “Whose icon is this?” “Caesar.” Jesus tells them to give back to Caesar what is already his!

And we, made in the image of God are to “give back to God what belongs to God.”

Now at this point, our inner accountant gets to work. Is that ten percent? A proportionate share? How much do we give back to God? The clue is found with the word “icon” translated in English as “image” and “likeness.”

Jesus puts the money question back into proper perspective. He affirmed the tax and made it all but irrelevant at the very same time! Because this really isn’t about money but rather how we live as people created in God’s image. Caesar owns the coin; but we belong to God.

Jesus says that everything we have and everything we are already belongs to God. Too often, we tend to hear this passage as saying that God’s stuff is here and the world’s stuff, or Caesar’s stuff, is there, so everybody should stay in their lane! In fact, everything belongs to God! God is to be the source and the goal and the judge of all human activity.

And so, while the state is not the church, God is over all. Which means that our ethics are not reserved just to the church or to believers, neither are our ethics a private thing. Ethics belongs in the public sphere every bit as much as in our private lives.

So much of both the Hebrew and Christian scriptures are devoted to showing us what ethical and just government looks like. A faithful ruler protects the people, and makes sure that the strong do not abuse or overpower the weak. The prophets castigate kings who forget that and also religious leaders who egg them on. Religion that demands obedience but not compassion is condemned by prophets like Isaiah, Jeremiah, John the Baptist, and, yes, even Jesus. Rulers who forget their accountability to God are treated harshly. In the books of First and Second Chronicles and First and Second Kings, rulers are graded by a kind of Michelin rating according to whether they kept the law and cared for the poor, the widow, and the orphan. Some are written off in as little as one sentence: “King so-and-so did not please the Lord…” Next!

When Mary sings the Magnificat after hearing the angel, she sings about casting down the mighty and lifting up the lowly.

As we approach another election, the airwaves are filled with news and analysis of the campaign, often focusing on the “horse-race” of who will win and who will lose. But I think when Jesus held up that coin, he was thinking of his mother’s song, the Magnificat.

Because if Jesus’ lesson of the coin, and the teaching of the Torah and Prophets, is any guide, God is interested in much more than who wins, places, and shows. The ethics, conduct, and example of our leaders is vitally important not only in day to day civic business but in shaping the soul and heart of the nation.

How power is used—whether to build up the rich and powerful or instead to care for the least among us—is a central concern in Scripture. The prosperity of a nation, in both Hebrew and Christian Scriptures is deeply connected to a nation’s justice and care. Saul, the first king of the united kingdoms of Israel and Judah is both anointed and held accountable by the prophet Samuel. And remember how the Prophet Nathan confronts King David over the Bathsheba affair? The prophetic tradition both blesses the monarchs and takes them to task when they start thinking it’s all about their power instead of their service. God is not interested just in who holds leadership, but in how they exercise their office.

So those Christians who treat themselves as an interest group, or use the language of the Bible to stoke fear show us that they succumbed to temptation of power and become a kind of court prophet—a job not judged kindly in the Hebrew Scriptures.

The entire prophetic tradition reminds us that while governing is a human activity, it is up to us to be sure than our common life—secular and religious—is one of compassion, humility, and service. The price of power is that the higher you go, the more accountable we are for how the lowliest are treated. The politicians themselves put this choice starkly in front of us: either we choose people who will only look after our own interests or we choose leaders who will guide us into caring for all God’s people and creation.

And that leads us to the core question: will we vote out of fear or out of hope? As we start to vote either in advance or on election day, remember that the power we hold in the ballot box is also a sign of our power to serve all of God’s people and our baptismal call to demonstrate God’s compassion every single day. Jesus teaches us to render to God what is God’s—because we are all accountable for our stewardship of creation and for the welfare of God’s people in what we render to Caesar.

Email ThisBlogThis!Share to TwitterShare to FacebookShare to Pinterest
Labels: Being a friend and apprentice of Jesus Christ, Everyday Ethics, On being an ambassador of reconciliation, Politics and Faith, Real Life Ethics, Sermons, Theology