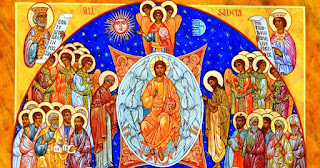 What a strange question! Saints are really, really, holy people, right? Only special people, who meet strict criteria get to be called saints, right? You need a committee of really smart people, theologians and church historians, to see if a person qualifies to be a saint… and those applicants have to have answered prayers where their intercession was specifically invoked and where miraculous things happened. We pray to Saints, we name churches for them and sometimes cities, or colleges or hospitals. Even now, as we sit in this church we are surrounded by idealized images of saints in the stained glass that adorn this church. It’s a pretty high bar!

The Episcopal Church has a calendar of saints and here at Trinity Church, we commemorate them on Wednesdays at our Noon Eucharist. Saints like Anselm of Canterbury, the theologian; St Francis and his sister St. Clair of Assisi; and, of course, the apostles like Saints Andrew, Peter, John and all of the rest. More recently, named saints have been added to our calendar like Martin Luther King, and Dietrich Bonhoeffer, martyrs, and Dorothy Day, founder of the Catholic Worker Movement.

We commemorate many saints alongside our Roman Catholic siblings, but some are unique to us as Anglicans: like George Herbert, the English priest and poet; Julia Chester Emery, an American Episcopalian who founded the United Thank Offering, and another Episcopal lay-woman, Frances Perkins, a pioneering social worker who, among other things, created Social Security and the Department of Labor.

But in the Christian scriptures, the use of the word “saint” is used much more broadly. The word “saint” appears 62 times in New Testament and the Apostle Paul used the term 44 times-- and not one of these times does he refers to a person for whom a hospital, college, parish, or parochial school might be named. In the New Testament, every follower of Jesus is a Saint, or in Greek "hagios", one of the holy ones. Yes, that’s right. You are one of God's saints. Now how can that be?

According to St. Paul what makes a saint a saint is Baptism. Being a person who believes in Jesus and says so out loud, and who participates in Christian community is a saint. In John’s heavenly vision in Revelation,

“… (he) heard a loud voice from the throne saying, ‘See, the home of God is among mortals. He will dwell with them; they will be his peoples, and God himself will be with them…’"

We are called “saints” because of God's continuing incarnate presence among his people; it is God who is intimately and fully holy, it is God who came in the flesh, who not only lived and walked among us and still dwells in the midst of His people. That presence permeates the entire community of faith.

Five years ago, the Episcopal Church got a new Presiding Bishop, Michael Curry of North Carolina was installed at the National Cathedral in Washington on the feast of All Saints. Before his election, he said:

God came among us in the person of Jesus of Nazareth to change the world, to change it from the nightmare it often can be into the dream that God intends. He came to change the world, and we have been baptized into the Triune God and summoned to be disciples and followers of this Jesus and to participate in God’s work, God’s mission of changing and transforming this world. We are the Jesus Movement now….

…We are part of the Jesus Movement, and he has summoned us to make disciples and followers of all nations and transform this world by the power of the Good News, the gospel of Jesus.

But let’s be careful here: in recognizing that we have already joined the glorious company of the saints in light by virtue of our faith and baptism, doesn’t mean that God has merely blessed our built-in biases and our life-long habits. As we hear in the Revelation of John today, God's voice thunders from heaven, "See, I am making all things new." We saints are being made new every day! 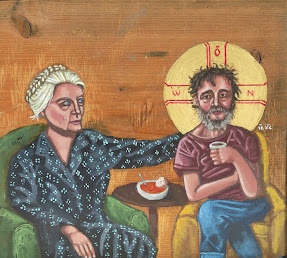 I recently saw a story that made me re-think and refine an understanding of sainthood that I carried around for years. It is the story of an encounter between a priest and Dorothy Day, the founder of the Catholic Worker movement, who died in 1980 at 83 years old. She was a champion for the poor and the working person and a bold activist for peace. During the 1970s, some priests were experimenting with the liturgy—trying to make it more accessible to ordinary people. One afternoon, a priest came into the soup kitchen where Dorothy Day was working. He wanted to offer a liturgy for the homeless, so he went into the kitchen and grabbed a mug from the pantry to use for the chalice.

Day prayed throughout that mass and after the liturgy ended, she quietly got up and started to cleanse the vessels. Then, she walked outside with the mug carrying a shovel.

A man followed her and asked her what she was doing. It is said she kissed the mug and then buried it. She told him that it was no longer a mug, but a chalice. It was no longer suited for coffee because it had held the Blood of Christ. She didn’t want anyone to mistake it for a mug again because once something holds the Body of Christ, it is no longer what it was. When the mug held the Blood of Christ, it changed its vocation forever. It could no longer hold anything less than Christ again.

Recently, our siblings in the Roman Catholic Church have been moving Dorothy Day through the process to make her a saint in their church. Which is ironic because she very firmly stated that she did not wish to be called a saint, lest she be trivialized. Jesuit priest Fr. James Martin wrote about this strained relationship:

"Dorothy’s own relationship with saints was anything but cynical. Both her daily speech and her writings were filled with references to St. Paul, St. Augustine, St. Francis of Assisi, and St. Teresa of Avila. She treasured their stories. For Dorothy these were not idealized super-humans, but her constant companions and daily guides in the imitation of Christ. She relished the human details of their struggles to be faithful, realizing full well that in their own time they were often regarded as eccentrics or dangerous troublemakers."

“We are all called to be saints,” Day wrote. “We might as well get over our bourgeois fear of the name. We might also get used to recognizing the fact that there is some of the saint in all of us. Inasmuch as we are growing, putting off the old man and putting on Christ, there is some of the saint, the holy, the divine right there.” In other words, Dorothy Day regarded sanctity as the ordinary vocation of every Christian—not just the goal of a chosen few.

At a sermon I preached a few years ago I said that we were holy vessels disguised as cracked coffee mugs or jelly jars. Thinking of Dorothy Day’s lesson, I want to amend that. Once, we were common mugs. Simple, functional, practical, and good people. We had a capacity to hold good things. But with our baptisms, when Christ entered our lives, we became much more. We became Chalices. We started to hold divinity Himself within our hearts. Now that we have held the Body of Christ within our bodies, we are no longer common, but rather extraordinary, even as we live in an everyday world.

One of the things I have learned about how to “do” and “be” church in 2020 is that for all the improvisation, re-learning, limitations, and new habits we’ve taken on, we are being taught valuable lessons in everyday sainthood.

We are discovering how we are being changed on the inside and how that changes how we are with each other. So now we don’t just care about our own health or own prerogatives, but when we choose to wear a mask and wash our hands, we are learning to care for our neighbor—even ones we’ve hardly or never met! We’ve learned this year that not being prejudiced is enough to heal the centuries-old wounds of our society, but we are learning to be actively, and practically, anti-racist. We’re discovering (God willing!) that our politics is not just about giving into our fears but how we as a society looks out for each other and brings us together.

I remember a children’s sermon I heard as a kid, and which I’ve repeated a few times in this parish. You and me and all the saints are just like these windows: we are people through whom the light shines. God is making all things new, and we, who have taken on Christ in baptism are now holy vessels—chalices—who communicate Christ every day.

Email ThisBlogThis!Share to TwitterShare to FacebookShare to Pinterest
Labels: All Saints, Being a friend and apprentice of Jesus Christ, Discipleship, Everyday Holiness, On being an ambassador of reconciliation, Saints, Theology