Being Trusted by God for God's Work 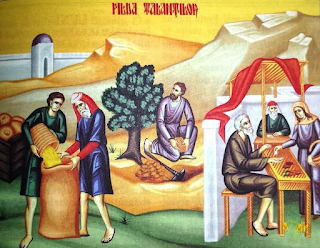 So, what the heck is a talent, anyway? I’ll tell you one thing: it won’t win you a spot on America’s Got Talent, or Dancing with the Stars, that’s for sure! You know those giant lottery billboards … the ones that tell you the current jackpot in great big letters? That’s a talent. If you suddenly had in your hand enough money to equal the average annual salary times twenty…. That’s a talent.

So imagine if you hit the jackpot. What would you do?

The trusted servants in Jesus’ story did not hit the jackpot. Instead, they were people their master had come to trust with what amounted to a winning lottery ticket—but there was a catch. They had to make it grow on his behalf!

This is what happens in the story Jesus told about three servants who were told to grow their masters money. Only two did, but one did not. He trusted them all, he believed them all to be responsible. And he gave them only as much as they could handle. Two of them did something to make their money grow. But not the third.  Remember, the master believed that the third slave had some skills, some gifts, some ability—because even though he was given the smallest amount, it wasn’t chump change! He gave the guy twenty years of average daily wage! That would be about a million dollars by today’s standard. Cha-ching!

But he was afraid of the master and knew he’d be angry if he lost, so he kept it safe…and that’s all.

Thinking about that third slave reminded me of a news story from a few years ago, where a young couple bought a house in California from the estate of an elderly man who had died alone, having outlived his wife and whose grown children lived far away. As the new owners began to renovate their home, they found envelopes full of cash squirreled away in nooks and crannies. Soon these envelopes became a pile and that pile amounted to hundreds of thousands of dollars. The old man didn’t trust the banks. He didn’t invest the money. He kept it a secret so no one would steal it.  He hid them for the day that, no matter how dreary and wet, was never rainy enough. His children said he lived in near poverty his whole life while working every day he could.

Now the new owners had a dilemma. Their lawyers told them  that all that money was theirs to keep. The contract on the sale of the house said so…all the contents of the house were theirs. But the new owner and his wife knew that the man did not save all that money to go to some stranger who happened to buy a house. Sure, they thought, here is a windfall but what kind of lesson shall we teach our children? So, instead of keeping the money, they gave it back to the man’s children for them to use.

Heart-warming story. But what made this man hide all his money in the first place? What made him keep it a secret from even his children? What made him live as a pauper while riches were only an arm’s reach away?

Fear. Fear and a kind of backwards faith that says something bad is always just around the corner.

That’s why today’s Gospel is so very important. Matthew’s church was trying to figure out how to live in that very long time between the resurrection and Jesus’ return. They remembered a teaching of Jesus and applied it to their own church and that lesson was never to bury or hide what we have been given.

Think about it. Here they were, fifty or so years after Jesus’ resurrection and ascension, and already there has arisen a disturbing tendency for the community to stand pat and let things work themselves out.

They, like us, had to be reminded of the bounty God has showered on his people; and, most of all, on the trust Christ has placed on us to carry out his mission…to be Christ’s people, Christ’s representatives in the world. And so Matthew included this lesson of Jesus into his Gospel… because his church was stuck in a kind of inertia—whether it was out of fear or simply stuck in complacency, we don’t know. But they had to be reminded that God in Christ trusted them with a great gift to do God’s work.

But being trusted can be scary. We don’t want to disappoint. We are afraid of messing up. We don’t want to lose what we’ve been given. And if that fear takes hold…if that worry about what might happen becomes front and center…if thinking about potential disapproval or judgment or concern over what people might think takes hold of our hearts…then we become helpless. If we are overwhelmed by worry then we become helpless. No wonder the third slave buried his treasure and hunkered down!

That is our challenge even today. We live in a strange time of uncertainty, caution to the point of fear, sometimes resulting in irrational defiance. We have just been through a strange, stressful election season, and even still some people cannot let go and trust the process they claim to love enough to accept the outcome. We think we hang on out of conviction, but really we are hanging on to dear life out of fear. In this environment we are tempted to hunker down, get belligerent, hide our gifts, and so become helpless.

I am reminded of the words of blessed Pope John XXIII—who risked it all for the sake of the Gospel in calling together the Vatican II Council in 1963. He said we in the Church are not the curators of a museum; but instead we are the cultivators of a garden. Gardening is hard work and requires planning and preparation and attention, and our hands will get dirty. Because gardens are for growing, not for burying.

Jesus’ parable says that the master gave each slave a gift in proportion to their abilities. I believe we have all been given what we need and the place to act on those gifts.

While we tend to focus on the poor guy in the Gospel who gets thrown in the outer darkness, we forget about the rest of the story: don’t forget the two servants who are complimented for their work, and more than that…they are welcomed into the joy of their master. What they receive is not a promotion with a fat paycheck but something much more important. Their faithfulness means that they enjoy a deeper relationship with God.

The fundamental difference is how they saw their gifts and how they understood their master in the first place. The master trusted all three and that trust was a gift— the ones who saw abundant possibility were the ones who returned that blessing to their master many fold and received blessing in return.

But too often we are like the third servant. We are often tempted to see God first and finally as a hard judge—as someone very scary—and this can blind us from seeing the gift we are entrusted with as an opportunity and calling but as a time-bomb. The third servant led with his fear, and so lost out.

The lesson here for you and me, the average friend and apprentice of Jesus, is this: receive what God has given you with joy, and use it—even it means some risk—in a way that returns that blessing to God. Don’t stand pat—do something big and audacious and risky for God.

We live in an uncertain time. We are asked to wear masks and wash hands and not go into crowded places. This is an important work of love and I commend it to you, not out of fear but out of care. We are tempted to get angry and stubborn and do something stupid. We are tempted to go for the familiar, instead of the imaginative and new. And I am not just talking about money—or even masks! I am talking about our tendency to organize our living around what we are afraid of, and that is when we bury what we’ve been given.

The antidote is to live joyfully in the blessings God has given us in Christ Jesus; to use the abilities and resources God has given us to be God’s hands and feet in the world; and to build on the blessings and assets we have to cultivate our lives in service to God and to the world starting right here, right now. We are being called upon to think of church and community in new, imaginative ways.

In Christ, we have been a given a gift beyond expectation or imagining. Now, how do we use what we have been given?

Email ThisBlogThis!Share to TwitterShare to FacebookShare to Pinterest
Labels: Being a friend and apprentice of Jesus Christ, Faith and Culture, Leadership, On being an ambassador of reconciliation, Pandemic, Politics and Faith, Sermons, Theology