So, what's the rush? 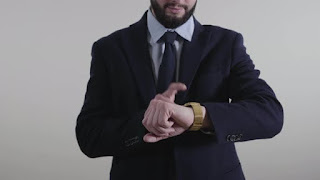 We’ve all done it. It is a trait we all share on one level or another. We’ve all found ourselves shifting our weight from one foot to another, folding and unfolding our arms repeatedly checking our watches or phones, sighing deeply and asking ourselves inwardly (or even out loud) “what’s taking so long?” We may teach our children and even our puppies “to wait for it.” But we can’t wait! We peek to see what’s under the gift paper as the presents sit beneath the tree, we peer into the simmering pot before it's ready, we push ourselves to lift that too-heavy box instead of using good body mechanics or asking for help. And why?

Because we can’t wait. We are impatient.

So, what's the rush?

Advent is said to be the season of waiting. But because it is also the season of our society’s Great Winter Festival—you know, from the Macy’s Parade to the Super Bowl—waiting is not an option. We want what we want when we want it. God help us!

This past weekend, I read a post from a mother who put on her Facebook page a picture of the wreck of dirty dishes after Thanksgiving dinner: “eight hours to prepare, twenty minutes to consume, an hour to clean up,” she wrote.

But if you think she has it bad, look at the farmer that gave us our feast: the one who prepared the ground in the spring, planted the seeds, watered and tended the plants, dealt with bugs, critters, and weather, and then harvested the crop and brought it to market. The farmer teaches us that waiting takes patience—which is not the same thing as twiddling one’s thumbs, but it is the wise use of time, hard work, and resources.

So, what is the rush anyway? Why are we so impatient so much of the time?

What makes us rush to control and manage things just so we can get what we want-- in our relationships? In our work? In our churches?

I believe that the rush comes when our deep inner longing meets our deep-seated inability to allow things to unfold.

The culture doesn’t help us one bit in this department! Everything is designed around getting us to want something and then get it as soon as possible. We’ve become so impatient that we can’t even go to the store anymore: we insist that it come to us! We buy our gadgets (and our groceries!) from Amazon in exactly the same way that the Coyote bought his rocket sneakers and bat wings from Acme.

Which brings us to Advent. As waiting seasons go, Advent is really not all that long. Four Sundays…that’s it! And often the season is not even a full four weeks, especially if Christmas lands on a Monday or Tuesday. But we light the candles, measuring either how long we’ve waited or how far we have to go before we can sing Christmas carols.

And you want to know what the really silly part is? After waiting those four Sunday, we rip through Christmas like a whirlwind and move right on to the January sales and New Year’s Rockin’ Eve. This year, the Christmas season covers two Sundays before we get to the Epiphany and the Magi. Already I can hear the sighing on that Second Sunday of Christmas, January 3rd… because two days after New Year’s some well meaning person will say to me, “are we still doing Christmas…?”

Impatience is at the heart of the human condition. Just look at the classic seven deadly sins: they all have in common the impatient desire to give in to our impulses now. Don’t believe me? Take a look:

According to the standard list, the big seven sins are pride, greed, wrath, envy, lust, gluttony, and sloth. Pride, in this construct, is not healthy self-esteem or self-worth but what happens when we place ourselves above others, when we overestimate our importance; greed—getting what one wants at any cost; wrath—uncontrolled rage against life’s limits or against another’s dignity; envy—resentment over another’s good fortune; lust—sexual (or other) satiation without vulnerability or relationship; gluttony—devouring and hoarding everything one wants (not just food!); and sloth, which is not mere laziness but living in expectation that that one will receive benefits without any effort at all. Sometimes sloth is called “acedia” which the habitual absence of interest or deep resistance to do one’s own emotional work—the temptation to give up altogether. Personally, I’d like to add impatience as the eighth deadly sin, but I don’t need to-- because all of these classical sins share in one way or another the trait of impatience.

Mahatma Ghandi put it well when wrote about the seven blunders of the world that lead to violence; which, again, share the trait of impatience: 1) Wealth without work; 2) Pleasure without conscience; 3) Knowledge without character; 4) Commerce without morality; 5) Science without humanity; 6) Worship without sacrifice; and 7) Politics without principle.

Both these lists tell us that there are no short cuts to virtue; and even our deep yearning for justice, and our longing for the coming of God’s reign require waiting, and, yes, patience.

Now, to be clear here, I am not saying that patience is the same as acquiescence. Patience is not the spiritual act of kicking the can down the road or assuming that someone else will do what we don’t want to do. “Patience” is not a synonym for “fear.” Actual patience requires trust, knowledge, effort, humility, and relationship. It requires a calm heart, clear thinking, and a non-anxious stance. Early in my ministry, when I worked with recovering addicts in a residential facility, the hardest lesson in recovery was for the residents to learn patience and with it the managing of one’s impulses.

“Yes, but…!” I hear you cry, “but what about justice?” Isn’t God impatient for justice? I sometimes hear preachers compare the sleeping disciples in today’s gospels to the church, asleep at the switch when it comes to justice. Jesus tells them to “wake up! Stay alert!” Why must we put up with oppressive and unjust systems for any longer than we must?

To which I reply, who says that patience is “giving in?”

True, there are folks who disguise their discomfort and fear of change behind an argument for patience; just as many mainline clergy (including some then-prominent Episcopalians!) told the Rev. Dr. Martin Luther King to “be patient” as he sat in a Birmingham jail, or who tried to stall the full inclusion of women into the Church’s ordained ministry asking for more patience. Personally, my tendency is to agree with Mother Jones, who organized coal miners in 19th century eastern Pennsylvania, when she said “Pray for the dead and fight like hell for the living.” On my wall hangs a saying, a kind of prayer, given to me at my ordination. It’s a quote by Elizabeth Cady Stanton who said, “Please don’t let me grow conservative with age.”

At the same time, while we need to be wary of confusing patience with acedia, we must also be careful to not let one’s impatience doesn’t grow into pridefulness. Remember, how Rosa Parks changed the world with her focused, targeted patience?

So, what is the rush?

In Advent, we repent from our impatience while we wait for God's salvation history to unfold.

We acknowledge our sin that we often assume that we know better than anyone… even God… about how to get things done for God. Look at the Christmas narrative and see the lengths people go to snuff out the Incarnation. In the Passion narrative we see what happens when the impatience of the religious authorities caused them to try to stamp out Jesus’ ministry, and what Judas’ impatience to rush along the coming of the Kingdom does to him—even how his impulsive impatience made him unable to accept forgiveness! The Gospels, and especially the Passion, show us in stark detail the heart of human sin, which includes our inability to wait.

For me, the heart of Advent waiting is being present. Living in the here and now, with a stance that learns from and appreciates the past (all of it… the successes and the tragedies, the sins and the acts of redemption) and looks to the future of with hope (you know, "faith that looks forward"). Advent reminds us of the saying that John Lennon repeated, that life happens while we’re busy making other plans.

It takes faith to allow things to unfold in their time. We so often want to reduce God’s time (Kairos) to our timetable (Chronos). But, like an experienced cook, it takes a mature faith to cooperate with that process, giving it energy where it’s needed and time to simmer when that’s what’s called for. You need the skill and the know-how to prepare the ingredients, the trust and the knowledge to let the cake bake or food cook, and the confidence—the faithful activity—to do the right thing, at the right time, in the right way to get the right result.

As we long for God’s promised future—as we yearn for the establishment of God’s justice, God’s redemption, and for the maturity of faith which comes from grace and for faithful community that comes through the action of the Holy Spirit—allow this Advent time to teach us how to cooperate with God in the unfolding of God’s reign, to do the work God has given us to do, and to teach us the virtues and tools we need to bring Christ’s healing to our broken, confused, and impatient world.

Email ThisBlogThis!Share to TwitterShare to FacebookShare to Pinterest
Labels: 3n1-1n3, Advent, Being a friend and apprentice of Jesus Christ, Discipleship, Reflections, Sermons