A scandal for the ages 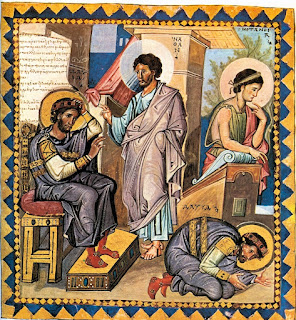 Today’s reading from the Hebrew Scriptures would have made for quite the congressional hearing or maybe the trial of the century! Imagine if the tabloids had been around to cover David, Bathsheba, her husband Uriah the Hittite, and the prophet Nathan. Truly it was a scandal for the ages! Whew!

We heard part one of the story last week, today we hear part two, and this morning I will bring the two parts together.

Uriah the Hittite was an officer in David’s army and married to Bathsheba. He was a real Boy Scout, known by everyone to be both a stand-up guy and a patriot. One spring, the season when Samuel tells us that kings went to war as surely as the flowers bloom, David was alone in his palace. He stayed in Jerusalem while his army was out in the field doing battle with the Philistines. While surveying the city from a rooftop, he saw, on a neighboring building, a beautiful woman bathing. She was Uriah’s wife, Bathsheba. David took advantage of his power, her powerlessness, as well as her husband’s absence, to have her brought to him.

Later on, when Bathsheba told David she was pregnant by him, he decided to move fast to cover up his indiscretion. He had her husband brought back from the front hoping that Uriah would meet his beautiful bride, and that way, when the time came for her to deliver, he'd have no reason for thinking the baby was anyone's but his.

He might have gotten away with it… just another ancient near-Eastern king doing what kings do. But Uriah's strong moral character and high sense of duty got in the way. Uriah tells the King that as long as his troops were on the front line, he would not abuse his privilege and party at home.

Undeterred, David invited Uriah to dine and after much song, tall tales, and wine, he sent Uriah home to his wife. But Uriah, true to his word, slept it off alone curled up on the palace floor.

Having struck out twice, David had Uriah carry a secret message back to his general Joab telling Joab to send Uriah to the fiercest fighting, put him in front of the army but then have the troops step back at the last moment. (Can you imagine the sheer chutzpah of sending a death warrant by way of the one to be executed!) Uriah was killed in battle alone and betrayed but publicly declared a hero. After a long enough period of mourning to make it look good, David married Bathsheba himself.

That was last week’s lesson. Now we turn to the rest of the story.

Time has passed. David married Bathsheba and their child has been born. There is much gossip and many rumors around the palace and city, still David probably thinks he’s gotten away with his crime. But the King’s prophet, Nathan, is bothered by this and God puts it on his heart to confront the king.

As I said, there are no hearings, grand juries, or newspapers… all the Hebrew kings had to hold them accountable were prophets, a job with tenuous job security no doubt! Saul had Samuel, Ahab had Elijah, Hezekiah had Isaiah, Jehoiakim and Zedekiah both had Jeremiah, and so on. Nathan was David’s prophet. Except for this, we don’t know much about him. It’s might seem odd that the editor and compiler of the Psalms did not also gather up Nathan’s oracles and put them in his own book, but maybe not considering what happens next.

Nathan asks to visit David in the throne room to talk about a hardship case he thought David might want to do something about.

You see, Nathan says, there were these two men. One of them was very wealthy with enough land, flocks, and herds to make a Texas millionaire gag. But the other man just one little lamb whom he loved too much to turn into lamb chops. The lamb was more than a pet… he was family, who would lap milk out of his own bowl and sleep at the foot of the bed. Well, one day an out of town friend drops in on the rich guy and, instead of getting a lamb from his own flock, he commandeers the poor man's one little lamb to be the main course.

On hearing this, David hits the roof! Why, he says, this guy ought to be taken out and shot! At the very least, he ought to be made to give back four times what the lamb was worth! Just who was this greedy, thieving, selfish so-and-so anyway?

Nathan turns David’s righteous indignation around when he says, “Thou art the man!”

He says to David, you are the one who forced yourself on Bathsheba, contrived to murder her husband Uriah the Hittite, and then take her to yourself. You are the one who covered up the crimes. You are the one who made game of God who loved you, chose you to be King, and who backed you against Saul. Over and over again God blessed you when things were rough, and this is how you repay God’s generosity?

Stunned and humiliated, David publicly admits his sin and repents, and this is where our story ended today. But all was not well. The relationship between David and Bathsheba was never the same… especially after the child from this encounter died. Sure, they would have another son, Solomon, who would become King after David; but only after Bathsheba nags David on his deathbed to promote him.

The sad part is that their relationship, clouded by dishonesty, indiscretion, and mistrust never really flowered. While it is thought that some of the Psalms might have reflected David’s remorse, there are some who think that he got off easy. In any case, the family relationships going forward are always under a cloud.

As I said at the beginning, it is astonishing that David’s indiscretion is remembered at all. After all, we remember David for his battle against Goliath, the way he was chosen by Samuel, for the way he grew and prospered and ruled over a united Judah and Israel. We, of course see the faith he exhibits in the psalms and poetry written and compiled in his name. All of which makes the contrast between Uriah’s integrity and David’s dishonesty all the more striking.

Besides being an epic of, well, biblical proportions, there are some take-aways from this story that I think is the reason Jewish tradition and the early church remembered this story, however awkward it may be. There are some things we can learn:

First, David is not so different than many of the heroes in the Hebrew Bible. They were flawed people, brazen sinners. God chooses similarly flawed people today who don’t know how to manage the power they’ve been given… but I am not talking about politicians nor celebrities. I am talking about us! That’s why we include confession and absolution before Communion and in every Daily Office we pray!

Second, God forgives. There is no sin that cannot be forgiven. We all sin against God, our neighbors, creation, and the members of our communities. Sometimes we are unable to recognize it and spend our lives dodging responsibility, and other times we carry it around like the chains of carried by Marley’s ghost and cannot believe that God forgives us through the love, passion, and resurrection of Jesus Christ. The grace we receive is costly grace, but it is real and available and available for all of us.

Third, this lesson teaches us that we have choices.  David had agency; it just took someone to remind him of that. Nathan and, in a peculiar way, Uriah recall David to his senses. He had to be honest and dare to look into himself, admit out loud his responsibility, and be ready to change.

I learned a little four-way test that helps. In our choices, if we do the right thing in the right way for the right reason at the right time we will experience the right result, the result that will help us be right with God, love our neighbor effectively… and sleep at night!

The key is to stay connected. In the Bible, we see David become more and more isolated from his nation, his people, and himself and with God. He forgot why he was chosen to be King in the first place. That same Bible shows us, in Christ and in covenant community, how we can be reconnected and made whole.

In our own living, we will be faced with choices. The grace of the Holy Spirit, mediated through prayer, Christian community, and sacramental living, allows us to zero on the faithful, ethical choice; to do the right thing in the right way at the right time for the right reason. It may not always be easy…and it sometimes costly… but it is always life-giving and healing.

A sermon given at St. John's Episcopal Church, Clearwater, Florida on Sunday, August 1, 2021

A video of the sermon may be found here.

A video of the entire liturgy may be found here.

Here is a copy of the bulletin for the day.

Email ThisBlogThis!Share to TwitterShare to FacebookShare to Pinterest
Labels: Being a friend and apprentice of Jesus Christ, Bible, Everyday Ethics, On being an ambassador of reconciliation, Reflections, Sermons, St. John's Clearwater, Theology