From Scarcity to Abundance 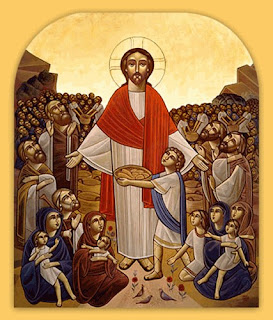 Pop Quiz: There is only one miracle of Jesus that appears in all four Gospels. Can you guess what it is? Is it Jesus walking on the water or the feeding of the 5000?

Yes! That’s right! The feeding of the 5000 is the only miracle of Jesus that appears in all four gospels.  Which may not be what you might expect: there are lots of cartoons, songs, poems, and paintings about Jesus walking on the water, and while the miraculous feeding is very well known, it’s not something that appears in very many stained glass windows.

But the fact that all four Gospels remember this incident four—maybe five – times tells us something: it says that among the very earliest Christian communities they all remembered that miraculous feeding and considered it very important!

It might not be so surprising that Matthew, Mark, and Luke’s churches remembered it in common… they, after all shared both the Gospel of Mark and some other Gospel material that would end up in the other two books…. But John’s community remembered it, too; and except for the Passion, Cross, Resurrection and Ascension, this is one of the few things Jesus did that all four of these widely diverse communities remembered in their Gospels.

So, what gives? What makes this miracle stand out?

I have two theories:

For one thing, I believe that Jesus did this miracle more than once. I think the Gospels point this way because not only does it appear twice in the Gospel of Luke… one time feeding 4000 and another 5000, perhaps because it happened in at least two different places which might explain how multiple oral traditions existed and how it ends up in all four Gospels.

If Jesus did do this more than once, as I think he did, we can guess that the miracles were also a prophetic act, a sign, that told the people both who he was and what God was up to.

Now there’s a common theory out there, that the feeding of the 5000 was a kind of stone soup moment: you know the story, right? Where the traveling teacher (rabbi, magician… take your pick) turns stones and water into soup by coaxing the starving townspeople to give up the vegetables they were hoarding and to create a soup that fed them all with lots left over. In this approach to the story, Jesus got everyone to contribute their sack lunches so that all were fed.

Well, I don’t buy it. Not in this case. It’s not that I am against stone soup— over the years, I’ve seen how God’s grace and power works that way all the time! It’s just that this not what is happening here.

And this is where my second theory comes in: For Jesus, these loaves of bread and these dried fish where not just a kid’s lunch multiplied; but was instead food given by God… any Jew of that era would have understood immediately the reference to manna, the food that God sent the Hebrews as they wandered in the desert after they cross the Red Sea during the Exodus!

There diverse witness of both these events not only make a strong case that these miracles happened, it’s also why both the feeding of the 5000 and Jesus crossing the sea on foot meant so much to the people of the early Church!

Bishop Nick Knisely of Rhode Island commented about this in his blog yesterday, asking the question “how would people know that Jesus was the Messiah? What was the sign they were looking for?”

“We tend to imagine that in a time of military occupation, the people of Israel were looking for a messiah that would deliver them from that bondage – but we don’t remember what … would signal that the Messiah had [indeed] come. In reading through the literature of that time, the defining sign was supposed to be the return of the Manna….”

So in the earliest Christian communities, the miraculous feedings stand right alongside the Passion, the Resurrection, and the Last Supper, as signs that God’s anointed Messiah has come to restore God’s people.

And just as these early communities compared the feeding of the 5000 with the manna of the desert, they also compared Jesus' walking on the water with Moses parting the Red Sea. They were thinking of Exodus and linking it both to Jesus' actions, and to baptism and Eucharist.

This has a bunch of implications for us today:

First, we are tangibly connected to God’s covenant given in the Exodus: The Sacrament of Christ’s body and blood, Holy Communion, is not only how we participate in Christ’s death and resurrection until He comes again; it also links us with the Passover. The miraculous feedings remind us how God tended, cared for, guided, and fed his people in a time of exile and journey. As God cared for those pilgrim people, so God cares for us!

Second, we are reminded that we God’s way is one of abundance. When Jesus tells the disciples to feed the people, all they can see is scarcity: they say, “all we have are five barely loaves and two fish but what is that among so many?” But look how Jesus accepts that seemingly meager gift from the young boy and turned the everyday food of the poor and working people of the day, barley loaves and dried fish, into an abundant banquet! Jesus demonstrates to us that God’s reign has begun and that all of God’s people are welcomed, fed, and cared for in abundance through the grace of God.

Of course, there are times when we don’t see Jesus coming and when we do, we don’t believe it. Just as the disciples were startled and frightened to see Jesus coming to them, walking on the sea, we are often unprepared for God at work among us. This is why we need a regular rhythm of prayer and spiritual nurture. A regular pattern of daily prayer, meditation on scripture, Eucharistic living not just alone but together, prepares us to walk with Jesus and to see God at work in abundance where before we only found scarcity.

One of my favorite examples of how this came to life in a practical, yet profoundly spiritual way is how, in 1976, Millard and Linda Fuller began Habitat for Humanity. It was a time where there was a great need for affordable, decent housing for the working poor, and where society was exhausted by war, scandal, and upheaval. With a few tools and a small group of volunteers, who never asked “what is that among so many?” as they turned a small community church project into a worldwide ministry. In Habitat, local volunteers and the working poor themselves work together to create homes.  demonstrating God’s love and grace along the way.

And that is only one example.

Time and again, small bands of faithful people show off God’s generous love in tangible ways from feeding the hungry, to visiting and bringing the sacrament to the sick, to finding new ways to be the church in a time of pandemic, war, and global disruption. And it happens over and over again in congregations with seemingly limited resources and not enough hands, who in the hands of Jesus, discover how little becomes much, the few become many, and the weak become the strong. But remember… it’s not stone soup… it’s Exodus.

It’s Exodus because every day, God leads faithful people through the desert of their worry, fear, and doubt towards the Promised Land. God’s abundance always builds on even the simplest of our gifts.

A sermon given at St. John's Episcopal Church, Clearwater, Florida on Sunday, July 24, 2021

A video of the sermon may be found here.

A video of the entire liturgy may be found here.

Here is a copy of the bulletin for the day.