Following Jesus is a partnership 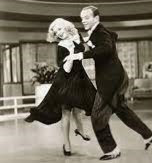 If you are on social media and want to follow someone, all you have to do is click a button. The algorithm does all the work! Nothing could be easier, right?

The truth is that being a good follower is hard work.

Ask a dancer. Have you ever seen those wonderful old movies—those movie musicals with all the dancing? It is said that Ginger Rogers did everything Fred Astaire did, only backwards and in heels! The legendary couple made partner dancing look effortless, but learning to dance, and dance well, takes effort, patience, humility, and grace.

An Episcopal priest, The Rev. Kerra Becker-English, tells the story of a dancer, a woman who danced ballet and modern jazz who was getting married to a lovely fellow… who had never danced a step in his life! They decided to take ballroom dance lessons, so they’d be ready for their first dance at the wedding reception. She thought her fiancé would do all the work, and that for her it would be a piece of cake.

Well, ballroom is not ballet and following is harder than it looks. Just ask Ginger!

Becker-English writes: “It takes practice to maintain balance through a double turn. It takes instruction to learn all the elements of achieving correct hip action for a Cha-Cha and then be able to do it without clutching on to a partner’s arm for dear life. A good follower must be well balanced, because even the very best dance partner cannot maintain balance for two. The best dance partner in the world can’t make your steps for you.”

Following in life, in dance, being a follower of Jesus requires attention, commitment and a sense of one’s own self.

Today, we are halfway through Mark’s Gospel and Jesus is talking about being a follower. The disciples have come to a part of Palestine peopled mainly by Gentiles, people outside the Covenant. In the Gospel, Jesus asks them what they’ve heard… what are people saying, who do they think Jesus is. I suspect that many people they met in their travels also asked them that question: who is this Jesus? Is he a prophet, a teacher, or one of the Old Testament sages come back to life? So, Jesus asks them who do they think they are following? Peter immediately pipes up and says that he is following the Messiah!

If the disciples thought that Jesus would just carry them into a kingdom where they would have all the spiritual rewards with none of the work; well, they are in for a surprise!

Because, Jesus says, the Messiah will have to be rejected by his people and the religious leaders, handed over to the authorities, executed, and then on the third day rise from the dead. Jesus is headed to the cross, and his followers will have to go there with him.

Peter cannot believe his ears! HHHHe pulls Jesus aside to tell him just how wrong he is! "Get behind me, Satan," Jesus says back to the guy who just a minute ago said he was the Messiah. “You are thinking in human terms, but not thinking about the ways of God.”

Then Jesus gathers everyone round and tells them what kind of Messiah they are following: "If any want to become my followers," he tells them “Let them deny themselves and take up their cross and follow me.  For those who want to save their life will lose it, and those who lose their life for my sake and the sake of the gospel, will save it."

Fifty-two years ago yesterday, this parish community decided to follow Jesus in a special way. Along the way, you have learned time and again that following Jesus requires a lot more than clicking a button. You have discovered that no one can do the steps for you. You’ve learned how to go where he goes and do what he does in the way that he does it.  Sometimes backwards. And, yes, I suppose, sometimes in heels. Who knew that your birthday would, 32 years later, become a day of tragedy, grief, and remembrance… the coincidence of these anniversaries is a reminder of the Gospel ministry you bring to a hurting world.

Both as a parish as well as Christians and citizens, we’ve had to learn to be careful about whom to follow.

As we look back this weekend on the terrible attacks on 9/11 twenty years ago, we don’t have dig very deep to find two kinds of religious followers at work. One type of follower were the nine men who decided to heed their leader’s message of defiant grievance into destruction and death. And there is another kind of follower… and there were many that day! … who died or put themselves on the line caring for the suffering, the frightened, the deceased, and the first responders.

We know about the nine… the ones who hijacked those four planes and died causing so much death and suffering. But while nine men chose evil, many hundreds of others when the chips were down chose to do the good.

Maybe this weekend you’ve heard of Fr. Mychal Judge, a New York City fire chaplain who ministered on 9/11 to the people who ran toward the danger to rescue those in harm’s way, while at the same time he cared for the dead, the injured, and the frightened. Judge was killed in the North Tower from debris from the collapsing South Tower of the World Trade Center.

The weekend we commemorate another follower of Jesus, Father Alexander Crummell, a priest and a “saint” in our Church whose feast day was also yesterday. He became a priest in 1844 even though the General Convention’s seminary, General Seminary in New York, would not accept him as a student and even though the Episcopal Church very nearly did not ordain him because of his race. He spent his entire ministry battling the racism of his day and raising up black men and women to serve the church and proclaim the gospel.

Or remember, too, yet another follower of Jesus, Henry Thacker Burleigh, who is remembered today on our church’s calendar. Burleigh was perhaps the foremost stage baritone of his day. An Episcopal layman, he was almost turned away from his church’s choir in New York City because he was black, but for the intercession of the wealthiest Episcopalian in New York, J.P. Morgan. He sang at St. George’s, recorded spirituals, and trained many other singers in vocal technique for over half-a-century. He showed us that “in Christ there is no east nor west, in Him no south or north but one great fellowship of love throughout the whole wide earth.”

On this octave of a world-changing tragedy, and our parish anniversary, it is good to contemplate what it means to follow Jesus. We learn from the Gospel and the examples before us today that following Jesus means that we act together, as Christ’s adopted baptized people in community, to discover our gifts and give them back to God and God’s people wherever they may be found. Following Jesus requires us to be attentive to Christ who leads us, maintaining our balance and being ready to go in new directions.

Following Jesus is neither mindless nor passive but is the concrete way we choose to act with Jesus every day in all our relationships.

I heard a story about Archbishop Desmond Tutu when he was still Archbishop of Cape Town South Africa. At the height of the anti-apartheid struggle there, when Christians were suffering and dying for justice and redemption, Tutu used to gather his staff around him every morning for prayer. And often as he was closing, he would ask, "If being Christian became a crime, would there be enough evidence to convict us?" The archbishop said this to his staff because they were not simply leaders in an important social struggle for dignity and freedom; they were followers of Jesus Christ insisting that God's reconciling love transcends anything that tries to resist it. Being leaders was not enough: people had to experience them following Jesus in their service and living if their leadership was going to be taken seriously. True Christian leadership is grounded in service and companionship.

Following Jesus is a partnership. It is Christ who leads; and we, as effective followers, are called to maintain our balance, observe what’s going on around us, and be ready to go where Jesus goes, even to the cross. Even to resurrection.

Email ThisBlogThis!Share to TwitterShare to FacebookShare to Pinterest
Labels: 9/11, Baptismal living, Being a friend and apprentice of Jesus Christ, Everyday Ethics, Everyday Holiness, On being an ambassador of reconciliation, Saints, Sermons