Blind, but now we see 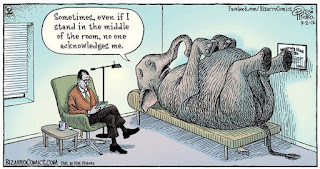 A favorite cartoon of mine these days shows an elephant lying on a psychiatrist’s couch looking very sad. He says to the therapist, “Sometimes even if I stand in the middle of the room, no one acknowledges me.”

Sometimes we look right at something and don’t see it. Either we don’t want to, or we can’t bring ourselves to say out loud what everyone knows is there but don't want to talk about, or else we don’t have the eyes to see.

The irony of today’s Gospel is that not only does a blind man see what no one else recognizes but a mere beggar has the voice to say it out loud.

When the Son of Timaeus, a blind beggar hears that Jesus, the Son of David, is nearby, he refuses to be invisible.  He shouts out “Have mercy on me!” The crowd tries to shush this embarrassing display—but that only makes him shout all the more! “SON OF DAVID! HAVE MERCY ON ME!”

Finally, Jesus stops and calls the man over.

So right off the bat, Jesus converts the crowd as they suddenly pay attention to him, call out to him and bring him to Jesus. The blind man is now a person with a name, a story and dignity simply because Jesus wants to talk to him.

When Bar Timaeus does ask to have his sight restored, Jesus does a third amazing thing. Nothing. Jesus does not touch him, he says no special words, smears no mud in the eyes—he simply tells Bar Timaeus that his own faith has him well.

So, what does Bar Timaeus do with this newfound faith which gave him sight and made him whole? What was his choice? Not to go back to the city gate, not even to go home, but instead he chooses to follow Jesus.

In Mark’s Gospel, this healing is the apex of the Gospel. Before this, Jesus is travelling the countryside teaching. After healing blind Bar Timaeus, Jesus is heading toward Jerusalem, towards the cross. Bar Timaeus is probably in a better position than all the apostles put together to meet the cross. Because Bar Timaeus can see—all the others are still blind.

The irony in this story is we start out thinking that Bar Timaeus is the one who is spiritually blind, but all around him are people who see Jesus right there in front of him and do not understand him. They either see a rabble-rouser and a heretic (as the religious leaders do) or else they see him as this idealized, fantasy messiah who will kick out the Romans and become an earthly ruler. They—both the Pharisees and the Apostles—have physical sight, but they can’t see what it right in front of them. They cannot see the elephant in the room.

But the blind one, Bar Timaeus, sees Jesus exactly for who he is, and he also knows that blind or not, he needs his sight restored. He sees and he knows that he needs more sight.

Some biblical scholars and church historians remind us that today’s passage is very much linked to the early baptismal rites of the Church… and since we are doing a baptism today, it is a good time to contemplate that.  One early baptismal ritual went like this:

The Candidate approaches the water and says: "Have mercy on me!"

The Deacon, in the role of Jesus to the congregation, replies: "Call him."

The Congregation says: "Be brave, get up, he's calling you."

The Candidate removes his clothes and approaches the Deacon and the Water.

The Deacon asks the Candidate, "What do you want me to do?"

To which the Candidate replies: "I want to be illuminated."

The Deacon, baptizing him, says: "Your faith has saved you."

If we see this story not just as the story of a healing but as a type for the baptized life, then we discover that there lots of ways that our vision is transformed and how in hearing, listening for and responding to Christ’s voice, we may see the world once again for the first time.

We are able to see the world of servanthood to the comfortless.  We can interpret our own faith journey in light of being given sight to see and to follow.  We are given an encouraging word to cast off our old outfits of blindness, of being voiceless and marginalized move to the center of the stage, and to participating in God’s emerging kingdom.

It is said that when ships from Europe first came to the Americas more than 500 years ago, the natives were surprised to see men in strange clothes on their beach, even though they had seen the ships approaching for hours maybe even days. They were surprised because they had never seen a sailing ship before, so they thought the white of the sails were a kind of cloud. They had sight, but they could not really understand what they were seeing… nor imagine the consequences!

The spiritual life is like that. We may see God’s creation, God’s people, the poor, the sick, the outcast all around us. But it is our encounter with Jesus, hearing him and responding to him that we receive our sight again. Receiving our sight again means that we see what is right before our eyes but have misunderstood or overlooked.

Your job as parents and sponsors of Avery will be to cultivate in her the sight that sees the holy in the everyday, sees the face of God in her family and neighbors, and who is not afraid to seek and call out for spiritual wholeness.

Just as Jesus did in his earthly ministry, I invite you to become seekers rather than pretend that you have found something you’re really looking for. Sometimes people assume that the Christian Church is a gathering of righteous people, or a gaggle of spiritual know-it-alls who want to tell everyone else what to do and how to live. Some people see us a social club who sole job is to do good.

In fact, we are all very much like Bar Timaeus. We are a baptized community of blind people seeking clarity of sight so that we might in turn help our brothers and sisters see.

The video of the liturgy may be found here.

The video of the sermon may be found here.

Email ThisBlogThis!Share to TwitterShare to FacebookShare to Pinterest
Labels: Being a friend and apprentice of Jesus Christ, Everyday Holiness, Reflections, Sermons, St. John's Clearwater, The Gospel of Mark