An unexpected king, a different kind of reign 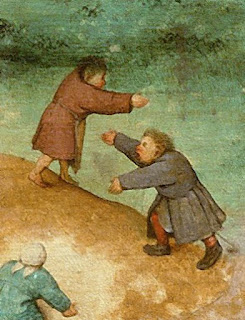 I wonder. Do kids play ‘king of the hill’ anymore? No, I don't mean the cartoon on TV. I mean the game where a kid will try to get to the top of a small hill, or top of a pile of other kids, and stay on top while the other kids try to push him (…I always remember boys doing this…) off.  The kid on top proclaims “I am king of the hill!” and then the others try to push him off.  The game can get pretty rough and most schools and camps ban it, or at least discourage it, from being played. So, I wonder if kids even know about it?

Well, they may have taken it out of the playground, but people still play some form of ‘king of the hill’ all the time! The playground game can be pretty good metaphor for life in the business world. All you really need is for one person to decide that they want to be the next king of the hill and then get everyone else involved in pushing the one at the top of whatever heap is being sought after to do the shoving and kicking and pulling. In some workplaces I have seen, the game of king of the hill is more fun, more time-consuming, and more important, than doing the work of building, selling, or providing whatever widget needs to be built or sold, or whatever service needs to be delivered.

Of course, it doesn’t just happen in business. It happens in politics… which I think is why the news looks more like sports coverage than news…. It can happen in homes. And it can even happen (dare I say it?) in churches.

When the game of king of the hill becomes too important, we are forgetting who is really in charge.

Today we celebrate the end of the Church’s year and we summarize everything that has happened all year long in this way: At the end of all the history of God’s saving activity since creation, Jesus reigns over all creation as King of kings and Lord of lords.

But listening to today’s Gospel, we might think that this doesn’t much of a kingship.

In the Gospel, we see Jesus who has been arrested, humiliated, and is seen standing before a real ruler. Not a king, mind you, but a Roman Governor…who represented Caesar who at the time ruled ¼ to 1/3 the known world. Governor Pilate asks this pathetic-looking wandering rabbi “Are you the King of the Jews?”

For Pilate, Jesus is nothing more than a political wannabe. A competitor. A power-seeker. One who stirs up the populous and disturbs the Roman peace. Pilate asks Jesus in effect “Do you think you are king of the hill?”

Jesus answers, yes, I am a king, just not in the way you think.

That’s because Jesus’ kingship, his power, is expressed in very differently than the way we think of or use power. His Lordship will be expressed not from a throne or from behind a big desk but from a cross of shame. It will be through this cross that Jesus will heal the rift between God and humanity, rescue us from sin and the power of death, and return us to a whole, healthy relationship to God. All we have to do is believe that he is the Christ and follow him.

In our baptisms, we took on Christ. We said we believe in Jesus, and accept him as the savior, the Messiah, the Christ. We promised to follow Jesus as our Lord over our lives.

We said, in effect, that we would put aside our own King of the Hill thinking.

I don’t know about you, but this is more easily said than done. Sometimes we get our wires crossed. I grew up in a parish church that was originally built by the wife of a wealthy industrialist for his workers. The church was built in memory of Samuel Colt of six-gun fame by his wife, Elizabeth. My home church was built so that workers of the gun factory could worship, yes, but also improve themselves in the parish hall which was really a community center: it had a ballroom, a gym, a bowling alley, parlors, a library, and classrooms. All good things. As 19th century industrialists went, I guess Colt (or at least his wife) was pretty enlightened about caring for his workers.

At the same time, it was also built to remind the workers who made their jobs, their houses, their school, and their church possible. Six guns and early style bullets (mini-balls) were carved into the Corinthian columns at the church entry ways. And in the rear of the church there was a big stained-glass window that showed Moses leading his people through the Red Sea…and (would you believe it?) Moses looked an awful lot like Samuel Colt! My home parish was built to reinforce our usual idea of kingship. Samuel Colt was king of the hill. In fact, the message was that God sent him to be King of the Hill. And you had better be grateful.

Now in fact I am very grateful to my home parish because by the time I got there, it was a very different place. The parish welcomed and reached out to the neighborhood with food, education and tutoring, youth programs, parenting classes, arts and music programs and AA meetings. It was a racially and culturally diverse community that also welcomed LGBT people way before it was cool! I didn’t know it then, but that parish formed me into the kind of Christian I am today. Samuel Colt might have been surprised to find that the parish he founded taught a different kind of power: the power of Christ in community to proclaim and make alive the Gospel.

Secular Christmas season is upon us… it’s not even Advent yet… you know the Great Winter Festival that will start with football and turkey on Thanksgiving and will end with the Super Bowl in February! But that’s okay. We Christians run on a different calendar. And on this last week of the Church’s year, let’s reflect on what it all means…the “why” God is doing what God has done.

Diana Butler Bass writes that the theme of Christ’s Sovereignty that we hear today actually helps us think about Christ's birth in a different way as we move from ordinary time to Advent and then Christmas. She writes:

“While the world might think Christmas is about WHAT happened (Jesus was born) or HOW it happened (Mary, a stable, angels, shepherds), this Sunday insists that the most significant question is WHY Jesus was born. The answer to that question is encapsulated in the dramatic confrontation between Pilate and Jesus (John 18:33-37), as Jesus witnesses to what is really means to be ‘king.’” 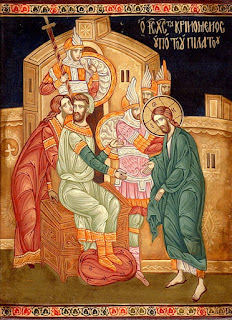 Jesus’ confrontation with Pilate shows us that what is important is not who is in political power, who has the most ratings, who sold the most, or who is ‘king of the hill.’ The most important question is who it is that we follow.

That is why I prefer to call this day not “Christ the King” but “The Reign of Christ.” What is important is not just who Jesus is, but what Jesus does! And what Christ does is “reign.” His rule is one of power, but the power of creation, service, love, and transformation. The importance of Jesus’ reign is that we are all drawn into a deep, abiding relationship with God that heals us inside, heals our relationships, and heals all creation.

So today’s the image of hundreds and thousands of saints gathered around the throne that we heard today in Daniel and in the Revelation of John is a picture of Jesus’ reign that draws people to him from every nation and people into a new kind of community: a community of service to God and to each other.

It’s no longer “king of the hill” but a gathering of all God’s people! The reign of God is like a cross between an open-air market and street-festival, a field hospital, a rock concert, an outdoor school, and a worship service where people of every kind gather around Christ and in their words, their actions, their relationships and their creativity proclaim him as Lord.

And you know what? We don’t have to wait! In our baptisms, in our common life, and in our daily living, we and all God’s people—we—are already citizens of God’s people and members of Christ’s household living abundantly under Jesus’ reign in the power of the Holy Spirit.

Bulletin for The Last Sunday after Pentecost - November 21, 2021 may be found here.

A video of this sermon may be found here.

Email ThisBlogThis!Share to TwitterShare to FacebookShare to Pinterest
Labels: Being a friend and apprentice of Jesus Christ, Discipleship, Everyday Holiness, On being an ambassador of reconciliation, Ordinary Time, Sermon, St. John's Clearwater