The Slee memo and the Feast of St. Augustine of Canterbury 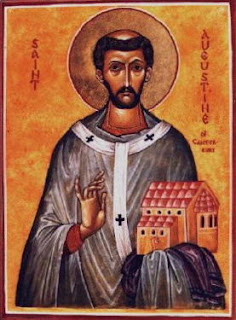 Yesterday, Andrew Brown wrote a report in Guardian describing a memo from the late Dean of Southwark Cathedral, the Very Rev Colin Slee, in which Slee describes the machinations of the House of Bishops in the Church of England over the question of whether a gay man can be elevated to the Episcopate.

It is not a pretty picture. We see the Archbishop of Canterbury, a man who can be given to great kindness, as well as the Archbishop of York, brow-beating, intimidating and threatening other members of the nominating committee who disagreed with him. We see Williams' throw a friend, the Very Rev. Jeffrey John, under the bus--not once but multiple times. (Even though Williams' claims to have "no problem" with celibate gay men being bishops.) We hear how England's Equality Law is manipulated and parsed for the state church of England. We see how Episcopal appointments happen in back rooms and in secret. (Which makes me appreciate our sometimes messy electoral system with the checks and balance of Standing Committees and/or General Convention.)

It appears that Williams and Sentamu will apply the same technique to the ordination of women to the Episcopate. They plan to ignore the General Synod and continue Flying Bishops after female bishops are regularized, ensuring at once the continuance of division and the demeaning of women clergy.

Let's assume for just a moment that the motivation for this behavior is a passion to hold the church together. Let's assume that this is done to allow those who don't agree with the ordination of gays or the blessing of same sex unions (or the ordination of women) room to stay in Communion. The way to do that is not to give into bullying, neither is it to bully those with whom you disagree.

Over the last decade, we have seen Williams' approach to this whole crisis. We have seen that it has made everything worse by rewarding bad behavior and consistently promoting a legalistic solution to a pastoral problem.

Every time he has given in to the folks most angry at "these issues" they have not only demanded more, they have participated less. At the end of the memo, Slee wrote the Archbishop about the Jeffrey John fiasco in 2003: "I still believe that had you stood your ground at the time, all that has followed would have been a short-lived blip instead of a deeper and deeper morass."

He has ignored the power dynamics--and the reality that the division in this country was funded by outside right-wing political groups--as so much "conspiracy theory" and still has given in to them. He has rarely refused a chance to insult or ignore the Episcopal Church.

I used to think that those who sowed division counted on Williams' good intentions to be used against him. I used to think that he "understood" the obscure levers of power in Lambeth and was really working for a good outcome, but in secret. But no more. What may have started as a failure of nerve has now become the ground he chooses to make his stand.

This memo demonstrates that the task of preserving the institution is not the same thing as preserving unity. He is choosing institutional stability over the hard work of Communion every time; and, sadly, it only makes the problem worse.

I don't understand how it is that a smart guy like Rowan apparently can't grasp that Communion is neither the same as conformity nor dependent upon agreement. Christ's promise that we all will be one has in fact been accomplished--on the Cross, in the resurrection and in the gift of the Holy Spirit. Our communion is built on common role the baptized share as disciples of Jesus Christ. The fact that we follow Christ and carry out His mission even when we disagree, that we share in His body and blood even as we differ, is the real sign of our unity.

(Lesley's blog talks about this, too.)

Today I found this reflection by Lowell Grisham, on the feast of Augustine of Canterbury (which is today), which describes well--and in thoroughly Biblical terms--what it really means to be in Communion and how the earliest Church handled clashes over apparently life-or-death theological and pastoral issues.

On the day we hear about the ugliness inside Lambeth, this comes as a useful corrective:

Paul wrote to a mixed community of Christians who came from different backgrounds and who had strongly held opinions. The major conflict in Paul's churches was between Jewish and Gentile Christians. Jewish Christians observed the sabbath and the kosher laws of their tradition and of the Hebrew scriptures. For Gentile Christians, every day was a workday, the sabbath was no better than another day.

Gentile Christians did not observe kosher dietary laws. However, for some Gentile Christians, their conscience was bothered by meat sold in the public market, for that was meat that had been dedicated to Apollo or one of the gods that they formerly followed. For others, there was no bother because they now believed there was no such thing as idols.

Pope Gregory gave Augustine great flexibility when dealing with the various traditions that he encountered when he arrived as "Archbishop of the English Nation." Augustine was not charged with enforcing Roman customs on the indigenous Celtic churches, but rather he was to honor whatever he could "profitably learn from the various Churches." People are more important than things.

Later in Romans we will see Paul urge those whom he calls the "strong" to be especially flexible with those whom he calls the "weak." He urges those who have a more mature freedom in the faith -- those whose consciences are not bothered by kosher laws or scruples about meat from the public markets -- to be charitable toward their more scrupulous brothers and sisters. When you are eating at home among your own family, feel free to eat what you wish. But when you are eating among the scrupulous, the "weak," refrain from eating what might trouble their conscience, even though your conscience is free.

Yet elsewhere, Paul does draw some strong lines. Especially over circumcision. Jewish Christians, following their tradition and the requirements of the Hebrew scripture, were certain that circumcision was a required sign and practice for those who would be acknowledged as God's people. They pointed to the testimony of scripture and tradition, and demanded that uncircumcised Gentiles be circumcised in order to be incorporated into the community of the church. Paul was vehement in his opposition. "No!," he said. Life in Christ was liberation from such legalistic traditions. Jewish Christians could not require circumcision from their Gentile brothers and sisters, regardless of their convictions, their traditions, scriptures or beliefs. For Gentiles to do so would nullify the glorious freedom that Christ has gained for us through the cross.

Paul did not say that Jewish Christians should refrain from circumcising in their own families, nor did he say that they should remove the signs of circumcision, as some Hellenized Jews did. But he also did not say that the Gentiles should be "flexible" with regard to the scruples of their Jewish Christian neighbors a be circumcised themselves for the sake of the scruples and conscience of their brothers and sisters.

I think these discussions and controversies are helpful guides for the present church and our own Archbishop of Canterbury. We are in a discussion in the Anglican Communion over the scruples of those whose consciences are troubled by the grace and fruitfulness that others have found in the faithful committed relationships of their gay brothers and sisters. "Let all be fully convinced in their own minds," seems like good counsel from St. Paul.

Those of us who recognize God's blessing in gay relationships may believe that heterosexual marriage is "no better than" the lifelong commitments of those of homosexual orientation, while other parts of the church may not. Let those who observe their commitments, observe them in honor of the Lord. Let those who are strong, whose scruples are not troubled by heterosexism, be charitable toward those whose consciences are troubled by the freedom Christ gives us. We need not require an acknowledgment that violates their consciences.

But, there is a line, as Paul insisted in the controversy about circumcision. Those who have scruples about their tradition of heterosexual-only relationships may not require "circumcision" of their gay brothers and sisters. They must not force their gay brothers and sisters to be circumcised "like them" in order to be welcome in the church's fellowship. Heterosexually oriented Christians cannot demand of homosexually oriented Christians to be either celibate or married unnaturally to someone of the opposite sex in order to be part of the Christian fellowship. To do so would nullify the glorious freedom that Christ has gained for us through the cross. To do so would ignore the fruits of the Spirit that we recognize in the committed, loving relationships of our gay and lesbian brothers and sisters. "The fruit of the Spirit is love, joy, peace, patience, kindness, generosity, faithfulness, gentleness, and self-control. There is no law against such things." (Galatians 5:22-23)