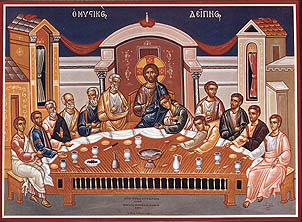 Judas poses a problem. How do you explain the fact that one of Jesus’ most trusted associates betrays him to his enemies? There are several theories.

There’s the Snidely Whiplash theory. John’s Gospel, which we hear today, tells us that he is a thief and an all around rotten guy.

Then there is what you might call the Anakin Skywalker theory of Judas. You know, he went over to the dark side. Today’s Gospel says that Judas let the devil into him or at least that the devil took over.

If you got your Christian formation from Jesus Christ Superstar, then you’ve heard the Cosmic Dupe theory: that Judas was cruelly used by a manipulative God and thrown aside for some larger purpose.

There was a snippet of Gnostic gospel that caused a stir a few years back that said Judas’ betrayal was all part of God’s Big Plan. Jesus spiritual self needed to break out of the flesh so he would be set free and this required death on a cross. Judas, in this scenario, did Jesus a favor.

Maybe Judas’ aims were political. Judas had to arrange for Jesus the Messiah had confront the Roman occupiers and their corrupt local toadies. Then the people would rise up in revolt or else God would be stirred to action and send angelic armies in some apocalyptic final clash. So Jesus was arrested to get the ball rolling.

Or maybe Jesus and Judas were really in cahoots and it backfired.

Isn't this fun? We love to psychologize Judas! Well, be careful. I suspect that your favorite theory of Judas might be one of those clues as to how you see God and a window into how your particular spiritual life works, but that’s for you to take up with your spiritual director.

You see my problem with Snidely Whiplash, Anikan Skywalker, and all those other theories is that it takes the heat off; which, frankly, is a relief. If Judas was merely a dupe, a thief or a conniver then I am free of responsibility and have nothing to learn. And we certainly don’t get close to the real tragedy that is Judas Iscariot, the trusted advisor who betrayed His Lord and Master.

This is a dangerous thought. I don’t know about you but this thought frightens me down to my socks. Because, if I am honest, I am always tempted to domesticate Jesus into blessing my own biases, prejudices and proclivities, but more than that firmly turning God Incarnate into a house idol that I control. Which in some ways is more comforting than following a Christ who not only dies to close the chasm of sin, but who, in meeting me at the point of my greatest need, confronts and challenges me to grow and change.

I think the scriptural evidence lines up on the side of Judas being too religious.

Both John’s Gospel and Luke’s agree that Judas was offended when a woman—Mary of Bethany and/or a woman off the street—washed Jesus’ feet either with perfume or tears in full view of a room full of men. He is portrayed as standing apart from the group sneering, but the real clue is his response to the crucifixion. However he died, either by hanging or throwing himself off a wall, his response was to choose suicide rather than accept forgiveness. In realizing and regretting his mistake, he went to his spiritual default zone—shame. And instead of turning that shame into reflection and repentance, he took that shame and made into regret and retribution—which, if the bad guy is you, means self-destruction.

Look, Peter also betrayed Jesus. Not for money but to save his own skin. He went away weeping and hid until it was all over. And yet, he was able to make some different choices with his shame and guilt—with his weakness and pride. He stayed in community…he hung out with the other followers while Judas went off on his own letting his money burn a hole in his heart. Peter was open to possibility, which is why he would later run to an empty tomb when Mary Magdelene appeared with her wild story of rolled away stones and Jesus-who-she-thought-was the gardener. And he was able to both embrace the risen Christ and later hear his forgiving words when Jesus gave him a second chance to confess his love.

Peter had, for all his foibles, reactivity, and his need to please, a fundamentally light hand on his spiritual tiller. Firm enough to stay focused on God, light enough to change when he needed to.

Both Peter and Judas had their OMG moment, when they said “Oh, my God, what have I done?” But it never occurred to Judas to seek forgiveness. And it apparently never dawned on him that repentance might involve something other than suicide. To do that would have required another kind of death: a death to the need to hang on the faux-Messiah that Judas made and turn to the real Christ who was there all along. Judas was so religious that he could not conceptualize resurrection and could not imagine what it was like to be forgiven.

This is yet another example of how being too religious can get in the way of faith.

And at the same time this is another example of how being too self-contained, too wrapped in our own stuff—be they grand ideas or emotional baggage-- can get in the way of allowing ourselves to grow and be changed by God who constantly engaging us right where we need God the most.

I have a hunch that even Judas’ religiosity to the point of death, the faith that blessed all his biases right up until the rope went twang, was not enough to overpower the cross. I have faith that the glorification that the cross became is bigger than even death. And certainly bigger than the rotten choices, stubborn opinions and everyday idolatry that you and I commit every single day.

If the empty tomb that we are journeying towards this week tells us anything it is that the Jesus who really died and really rose from death also really welcomes us home even after our stubborn refusal to listen to Jesus the first (or hundredth) time.

Why did Judas betray Jesus? In the end only God and Judas knows. Whatever the reason, it stirs up in us all the ways that we participate in betraying, denying Jesus and generally being mad at God for not living up to our expectations.

The good news is that none of our everyday betrayals, denials, disappointments, and machinations is bigger than the cross. And when we have our own OMG moment, we will find the Risen Christ right there, ready to forgive us, change us and lead us to be the people God made us to be.
Posted by Andrew Gerns at 11:00 PM

There is much to learn from this sensitive and insightful discussion of Judas. May I add a literary point?
Others ( e.g. Dr. Michael Cook) have shown that the Judas incident is a late addition to the Gospel narrative and, since the very name is synonymous with the name of the Jewish nation, Judea, the betrayal was added further to blame the Jews, through the person of Judas, for the crucifixion. In other words, when the ancient listener was told that "Judas betrayed Jesus" what they heard was "The Judeans betrayed Jesus."

This is lovely. Thank you for posting it.

I'm reminded of how we deflect Evil onto others in many ways, saying "At least I'm not like..." But to see we have the option of being Peter or Judas based on our response to our own evil choices is a new way of looking at this passage for me.

Thank you so much for this thoughtful take on Judas. I've always tended to pass over his story because it makes me uncomfortable on so many levels. You've given me reason to look at both Judas and Jesus again, in a different way.