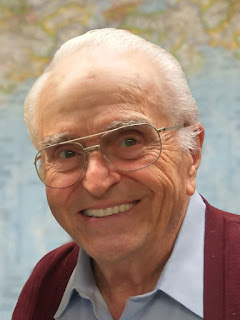 Word has come that Jack Chick has died. Maybe you have heard of him, or perhaps read one of his tracts?

From 1964 on, Chick Publications produced little comic style tracts designed to lead a person to Christ in a fire-and-brimstone style. The tightly written and illustrated little vignettes portray a fundamentalist Gospel so stark that even Christianity Today and the Christian Booksellers Association shied away from them as being too harsh and over-simplified.
I first encountered these booklets when I was a teenager in the 1970's. Generally speaking, I found them to be a kind of theological car wreck. Too gruesome to watch, but strangely irresistible.
They followed me around. Many hours of hospital ministry was spent scooping these (and other) tracts designed to scare the infirm and their loved ones into heaven. I used to keep a bulletin board in my office for such material under the banner "For THIS we had a Reformation?!?"

Every now and then, I will find them left around our parish's soup kitchen, or some kind soul will include them in an unsigned letter designed to correct the theological errors of my preaching or writing.
My colleague on the Episcopal Cafe, Jon White wrote:

Chick was known for his Chick Tracts; controversial comics rooted in his own fundamentalist Protestant worldview.  His tracts were notoriously anti-Catholic and also attacked Freemasons, Muslims, Jews, and  other groups whose views he deemed contrary to his own evangelical brand of faith.

Chick fell for every religious conspiracy possible; rarely ever relying on actual history or fact...

Los Angeles Magazine reprised a 2003 profile on the news of Mr. Chick's death.

Chick’s most popular book, This Was Your Life!, was published in 1964. At 21 pages, it is a masterpiece of shorthand horror. By the second panel, the Scotch-swilling, ’Vette-driving protagonist has dropped dead of a heart attack. “Review his life!” the Lord commands, and an angel produces a massive CinemaScope screen in the night sky. The man watches scenes from his wasted life, in which he tells filthy stories, leers at blonds (“ummm nice!” he says to himself), and thinks about a ball game in the middle of church.This Was Your Life! created a template—sin, damnation, the possibility of redemption—for scores of future tracts.

The artist’s formula and drawing style have changed little in five decades. When an archivist at the Pasadena Playhouse began rooting through old boxes in the late ’90s, she discovered drawings that he had done in 1948. The single-panel cartoons revealed the same perspiring characters, pop-eyed faces, and 1940s Sunday-comics sensibilities of his current tracts. “He’s not worried about impressing other cartoonists, which is kind of what motivates a lot of cartoonists to pick up their chops a little bit,” says Clowes. “There’s something really interesting about seeing a cartoonist not develop at all.” Art Spiegelman, who won a Pulitzer Prize for Maus, a graphic novel about the Holocaust, is less kind. “It makes me despair about America,” says Spiegelman, “that there are so many people who read these things.”

Chick’s choice of medium was not that odd—for the 17th and 18th centuries. He comes from a grand tradition of pamphleteers, writers like Daniel Defoe, Jonathan Swift, and Thomas Paine, who exploited the new technology of movable type to reach the masses in previously unimaginable numbers. Starting in the 1640s, pamphlets about everything from religious reform and phrenology to the injustice of the Stamp Act were everywhere, their authors at the forefront of the world’s first true media boom. In many ways the pamphlets of that era functioned much like today’s Weblogs. Chick, however, has done bloggers one better, finding ways to get his message to places still untouched by the Internet. Missionaries regularly take his tracts into the world’s most isolated regions—and pay Chick for the privilege, at about 14 cents a tract.

Chick's work angered many people, as the comments downstream in The Episcopal Cafe piece illustrates. The Progressive Secular Humanist blog at Patheos was typically unsparing in its criticism of his work, saying: "The comics promoted an extreme conservative Christian message filled with hatred and justified with ignorance."

Anecdotally, at least, I know of as many people driven away from faith in Christ because of these booklets as those drawn towards Him, maybe more. At the very least, it portrays a theology and approach to evangelism as subtle as a sledge hammer breaking up concrete and about as compassionate.
Christianity Today wrote:

Among comic artists, Chick rose to a level of fascination as one of the bestselling underground publishers in the world. Early news of his death on the site Boing Boing launched Chick’s name as a national trending topic on Twitter on Monday afternoon.

In the late 1990s, a media watchdog site described the secular fascination with Chick: “To some, Chick tracts are American folk art, or even a form of religious pornography, titillating and somewhat dangerous. Chick is the ultimate underground artist: single-minded and self-published, passionately committed to his message without regard for external social forces.”

Chick’s 150-plus tracts center around distinguishing the “saved” from the “lost,” the latter represented by various culture war targets over the years.

The temptation to schadenfreude is almost irresistible. A lot of people have imagined that Chick has gone straight to hell without passing "Go." These imaginings have been often as cruel as they claimed his tracts were, masking the cruelty as cheap jokes. Like this one: 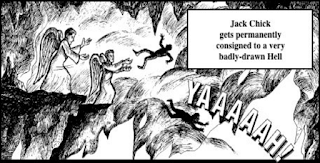 Over the years, a few Christians have attempted to take on Chick's theology and his narrow view of salvation. Given that the only English Bible he accepted was the King James and his view of the church excluded virtually all other Christian traditions but his how, this could only get one so far.
It seems to me that maybe the best refutation might come in the form of a little comic book in the style of, well, a Chick Tract. Here is the musing I came up with for a comment I wrote in response to the story on The Episcopal Cafe (full disclosure: I am a member of the Cafe news team):
Personally, and perhaps in response to my own sense of schadenfreude, this is what I imagine might have happened to Jack Chick after his death:

Mr. Chick arrives in heaven and while walking around spots a little booklet on a table and picks it up. Simply drawn and simply written, he is drawn into the story and begins to read.

Titled “Surprise!” the little booklet tells the story of a very religious and zealous man named Jack who, after a lifetime of popularizing a fundamentalist vision of the Gospel, dies and is confronted by God.

In the booklet, we see Jack looking around a wondrous place filled with light. As he enters, he finds the place filled with Catholics who ate “Death Cookies” (along with Orthodox and Coptic Christians, who all look the same anyway), gay couples holding hands, Muslims, Jews, kids who bailed on Sunday school to play Dungeons and Dragons, and even run of the mill agnostics. He looks over and sees Mother Theresa and Ghandi chatting while elsewhere the Pope and Charles Darwin are taking a walk, admiring the view.

Jack is startled and confused, and asks a passing angel if this is really heaven.Without a word, the angel accompanies Jack to God’s throne where he will receive final judgment.

In the next frame, we see a magnificent but faceless person sitting on the throne drenched in blinding life. The One on the throne begins to describe to Jack that Christ died once for all while we all sinners (Romans 5:6-8) and all along it was God’s will that all God’s sheep would come to the shepherd (John 10:16), even the ones who do not know God’s voice. God tells him that there is no law against a holy life but there are clear signs of holy living for all to see (Galatians 5:22-26). Jack will learn that God desires mercy not sacrifice (Matthew 12:7), love over judgment (Luke 6:37) and wants us do justice and walk with God (Micah 6:8). Finally, in a thunderous voice, God tells Jack that he will be judged according to how he met Christ in the hungry, the naked, the outcast, and the imprisoned (Matthew 25:31-46).

As Jack falls to his knees, shocked at what he has learned, tormented by his failure to heed God’s word, and fearful that he might be cast into eternal torment, he looks up to find Jesus helping him to his feet and welcoming him into a Kingdom more glorious…and more populated…than Jack ever imagined.

In my imagination, I see Mr. Chick finishing the booklet, and looking around, as if for the first time, comprehending the love that drew him in the first place.

At least, that is my prayer.

For those who think that I am being too easy on a person who spewed such hatred and who so badly misrepresented the Gospel to so many, all I can say is that I am mindful of the various ways that I have mangled my own witness in my lifetime. The fact that Chick's reach has outstripped my own doesn't absolve me of the call to humility in the face of the call to serve at once as an messenger of the Good News and as an ambassador of reconciliation.
Posted by Andrew Gerns at 4:43 PM

Email ThisBlogThis!Share to TwitterShare to FacebookShare to Pinterest
Labels: 3n1-1n3, Being a friend and apprentice of Jesus Christ, Evangelism, For this we had a reformation?, On being an ambassador of reconciliation, Opinion, Theology