Life in the Big Polis 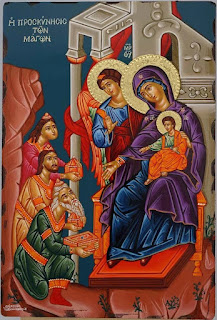 Updated January 4, 2022.
I have mostly kept my feelings to myself, but I must admit that I am very sad and disappointed that the date January 6th will forever be a date that will live in infamy.

January 6, 2021 was a Wednesday, and in my former parish, we had a mid-week Noon Eucharist to celebrate the Feast of the Epiphany. Even though it was mainly live-streamed and “You Tubed” because of the pandemic, there were two or three other people besides me taking part in person, we celebrated the last day of the Christmas season by recounting the story of the Magi and the recognition of Jesus as Messiah by representatives of the Gentile world beyond first century Judaism in Roman-occupied Palestine.

The message in Matthew’s Gospel is that Jesus is the Messiah for all people! The Epiphany story of the foreign astrologers who come to worship a new-born king in Bethlehem is nicely bookended at the end of Matthew when Jesus sends out his followers into the all the world to proclaim, baptize, and teach the Gospel.

See the symmetry? The world comes to the infant Jesus to proclaim him king at the start of the Gospel of Matthew; and at the end when the risen Jesus, whose kingship was proclaimed on the cross, is about to ascend to heaven, we, his followers, are sent into the world.

And then there was Washington, a year ago.

That was a kind of epiphany, too, I suppose. A revealing moment. And just as the Epiphany season will show us God’s true nature in Jesus Christ, the uprising a year ago showed us something of our true nature.

Part of my reaction comes from shock and grief. You see, I am a native of Washington, DC, and it is where “my people” (as my mother used to say) came from. Both my parents and one of my brothers are also natives of The District. I also spent a bit of my childhood in Concord, Massachusetts, where “the shot heard round the world” was fired. I was a Scout, as my father was, when he ushered at one of FDR’s inaugurations. My family story is filled with people who served our country in military and civil service: from soldiers and sailors to librarians of Congress to engineers who built both civic projects and moon rockets. And while I never served in the military, as my Dad and others in my family have, and have never run for elected office, I did my civic turn in volunteer fire and EMS corps, serving on local boards, registering voters, community organizing, and mostly by never, ever, missing an election since the day I registered at 18 years old.

For me, patriotism is not merely a feeling, it’s practical. It is the practical work of the people for the common good of the “polis,” “the city”, which is the root of the word “politics.” I can still recite that part of John F. Kennedy’s inaugural speech in 1961: “Ask not what your country can do for you, ask what you can do for your country.”

One of the people who came to that Epiphany Eucharist was a friend of mine, a Lutheran pastor, who was one of my favorite theological sparring partners. We agreed on much, but we disagreed on plenty, and our plan was to go to lunch after that Noon Eucharist and kibbitz over one thing or another. Ironically, we were reminiscing about my roots in The District, when we first heard of the violence in the Capital.

As we processed the news, we asked the question “where would Jesus be in all this mess?”

The epiphany of January 6, 2021 was that our common life is fragile, and it is all too easy to be given over to fear. Fear is all to easy to be manipulated by selfish ambition. Useful, functional, politics can be easily manipulated by the unscrupulous into corrupt ends or mob rule.

It fascinates me that when Jesus taught, he used the image of “the Kingdom of God” so often. Twenty-seven times, in fact, in the Gospels of Mark, Matthew, and Luke. But instead of talking about an earthly political rule, he was talking about life in the “polis” or “city” of God… about our life together as people of faith. Jesus’ parables typically reflected the surprise of discovering the work of God in the most unexpected places: like yeast in a loaf, like fish in a net, or like mercy coming from a neighbor we were taught to fear and hate.

It is perhaps a strange grace that just ahead of this sorrowful civic anniversary, this sad epiphany into the dark corners of our civic life, that we heard all these remembrances after the death of Archbishop Desmond Tutu, who, needless to say, undertook his own struggle against an unjust political system. One thing he said was this:

“My father always used to say, ‘Don't raise your voice. Improve your argument.’ Good sense does not always lie with the loudest shouters, nor can we say that a large, unruly crowd is always the best arbiter of what is right.”

One key to understanding how Jesus understood God’s “polis” is found in the Lord’s Prayer, where we daily pray that God’s will be done on earth as it is in heaven. We pray that heaven will come to earth; and we pray that our life together will in some way mirror what God’s ideal community might be.

My hope and prayer for us is that the Epiphany of Jesus as Messiah and Lord this coming January 6th, will overshadow and leaven the anniversary of that angry insurrection. That instead will come the epiphany that we friends and apprentices of Jesus can in fact live lives of grace, conviction, love, and justice– where our life together is a living parable of what real life is like in the “polis of God!"

Act(s) of grace and an act of will indeed. Thank you Andrew.

It sounds like a shock, that you and your colleague learned about the insurrection right after such an uplifting service. In this post, you've processed a lot related to your own and your family's engagement in civic life, and I think it's helpful to me and likely to others in processing their own reactions to the memory of this event. I hadn't considered the intersection with Epiphany; it was a revealing moment.

This is an outstanding post, Andrew, and in everything you discussed, you hit it spot on.

I would add one other element about the insurrection of January 6th, and the extremist political movements that have been festering for years and that ultimately led to that lamentable attempt to overthrow the government. For me, watching people deliberately distort Christianity, attempting to twist the meaning of our faith so that it serves as an instrument in support of violence and racism, is profoundly offensive and deeply infuriating. Let us recall Trump's decision to shoot tear gas at peaceful protestors so that he could wave a Bible -- a book that means no more to him than a stage prop -- and that he did so in front of an Episcopal Church (thankfully, the local bishop immediately condemned his actions on that day). This and many other misappropriations of religious iconography can only be described as nauseating.

I pray that Trump is healed of his emotional illness, and that he achieves sufficient enlightenment so that he is led to repent -- and to make amends -- for the immense damage he has inflicted on countless people throughout his public career. I also pray, however, that justice is done, and that he and the other ringleaders of the January 6th insurrection are properly punished for their crimes. The administration of strict justice, I suspect, is one avenue by which repentance might conceivable come about.