Living into our baptismal identity 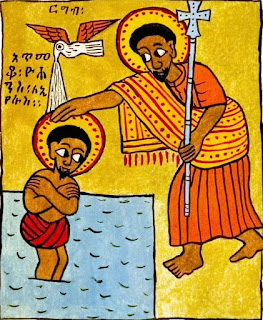 “You Episcopalians sure do talk about baptism a lot!”

I have heard this comment from some of my Protestant minister friends and colleagues. My best friend from high school, Chuck (who, I am sad to say, died from cancer last year) who a Baptist pastor and dyed-in-the-wool evangelical if ever there was one once told me the same thing.  He commented that we Episcopalians talk about baptism more often that most Baptists! He was raised in the Episcopal Church but his move to the Baptist tradition happened before we Episcopalians fully recovered our baptismal theology with the advent of our present Prayer Book over forty-six years ago.

And he was not alone. Once, a member of my former parish who was getting ready for her confirmation as an adult said the very same thing to me. “You sure do talk about baptism a lot!”

And, you know what? They are right! We Episcopalians do talk about Baptism... a lot!

I don’t remember my own baptism. I bet most of you don’t, either. There are a few of you here who were baptized as adults, but as strange as it sounds that is actually the exception, although it is the norm! If you look closely at the Baptismal rite in our Prayer Book, you’ll find that it is actually designed for adults… so the norm is that we baptize adults, and yet our most common practice is to baptize infants.

I can only guess, but I imagine that my baptism was a quiet affair: just my family, the godparents and the priest at the font of their parish church, which in my case was a place called Truro Church in Fairfax, Virginia. After the quiet Saturday morning or Sunday afternoon baptism, there were probably a feed at the house and lots of baby talk or talk about babies.

Even today, people will still ask me about “christening” their baby. Well, okay, but to me we “christen” ships, and we baptize people. Besides, the image of applying a champagne bottle to a baby is enough to get one turned into the proper authorities!

A strange thing happened in my Christian story that drove home the importance of my own baptismal identity. When I was twenty, I was a student at Drew University in New Jersey and studying religion that was part of the University. During the first week of Michaelmas term (i.e., the fall semester), I was sitting in the refectory across from an older American, an Episcopal priest who was doing his pre-retirement sabbatical studies at the same place. We were chatting about this and that, when I asked him his name. He said “Raymond Davis.” I was stunned! And after a moment, I blurted out “Sir! I believe that you baptized me!” The ordinary meal became a joyous reunion. He remembered my parents and my brothers, and that my dad was his senior warden when they built their new church that opened in 1959 and that I was baptized in the original colonial church that would become their chapel before my family moved to New England when I was toddler.

Our encounter in that Oxford refectory was a startling reminder that we are not baptized to save babies from fiery furnaces. We are initiated into a community of followers, friends, and apprentices of Jesus Christ.

In the first decades of the Church, the earliest Christians changed their understanding of baptism from what John the Baptist did to something entirely new. Jesus’ incarnation, passion, death and resurrection changed how they saw God at work.  And their understanding of themselves as the church, as the Body of Christ, changed, too.

John the Baptist, as we see in Luke, was like an Old Testament-style prophet, telling people to straighten up and fly right. When he baptized it was a kind of an object lesson meant to drive home a point and move people to action. It was a way for a person to demonstrate publicly that they were ready and willing to sign on the prophet’s agenda—which, of course, is God’s agenda. John’s baptism was a sign of repentance, an outward sign of the intention to live life in a new way.

When Jesus asked to be baptized by his cousin John protested. By taking on a baptism of repentance (that John said he didn't need), Jesus proclaimed that not only was he going to set us right with God, but that he was going to take on all the things that separate us from God. It was all apart of Jesus' divine work of setting us right with God, and a sign that Jesus walks with us in our pilgrimage towards wholeness, justice, healing, and peace.

The earliest Christians understood baptism differently that John. Yes, repentance was a part of it, but the context changed. Instead of simply renouncing something, baptism became a sign that we are putting on Christ. In Baptism, the Apostle Paul would write, we participate in Christ’s death and resurrection, and literally are changed, and we become part of a new community! Think of it this way: in the early Church, Baptism changed from being something very much like an earnest New Year’s resolution into a change of identity and purpose-- a change of our very being!

It didn’t last long. Well before the middle ages, even up to our own day, baptism became a combination of a thanksgiving rite for a safe delivery, and a rite of dedication of sorts. Any talk of conversion, communion, and participation was put off until confirmation. On top of that, until a couple of generations ago, it was simply assumed that being a part of a church was part of what it meant to be in this culture.

Despite some folks who would conflate Christian living and our western or American culture, we live in a world that has largely given up on the need for a common religion and everyone is on their own, in it for themselves. Today baptism, whether for ourselves or our kiddos, is something we choose.

The good news is that this has helped us recover some of the radical implications of baptism: that in baptism we are adopted into Christ’s family the church; that in baptism we put on Christ and seek to imitate him in our ethics and our relationships; and that because of our faith in Christ and because of our baptismal promises we are now taking part in His ongoing work of reconciling humanity and creation to God.

And we have begun to look again at the idea that Christian families in Christian communities can raise up and nurture Christian children.

So that’s why we Episcopalians end up talking about baptism a lot!

You know every year, all of us have birthdays. We generally make a big deal about it. And even people who don’t like to celebrate their age, still mark the day by their studious avoidance of the subject. We don’t remember our births—at least I don’t! — but we need the birthdays to remind us that we are not only alive, but have an identity, a history and that we are important.

We Episcopalians renew our baptismal vows four or five times a year, plus every time we baptize someone new, to remind us that we have a new identity. We are marked as Christ’s own forever. We are his ambassadors of reconciliation. We are members of the Body of Christ. We are a community of baptized people.

All around us in this church are symbols that remind us of this: the font placed in full view in front of the altar reminds us that we come to the Eucharistic feast and the fellowship of Christ’s people through baptism. The “stoups” (that’s what those little fonts by the doors are called) are filled with baptismal water to remind us, as we enter church (and for some, as we go back into the world) that we can carry out the ministries we do precisely because we are adopted daughters and sons of God.

And that is why we talk about Baptism all the time. We can’t help it. It is who we are.

Here is the bulletin for St. John's Episcopal Church, Clearwater, FL for Sunday, 1/9/2022

Here is the video of the liturgy.

Here is the video of the sermon.